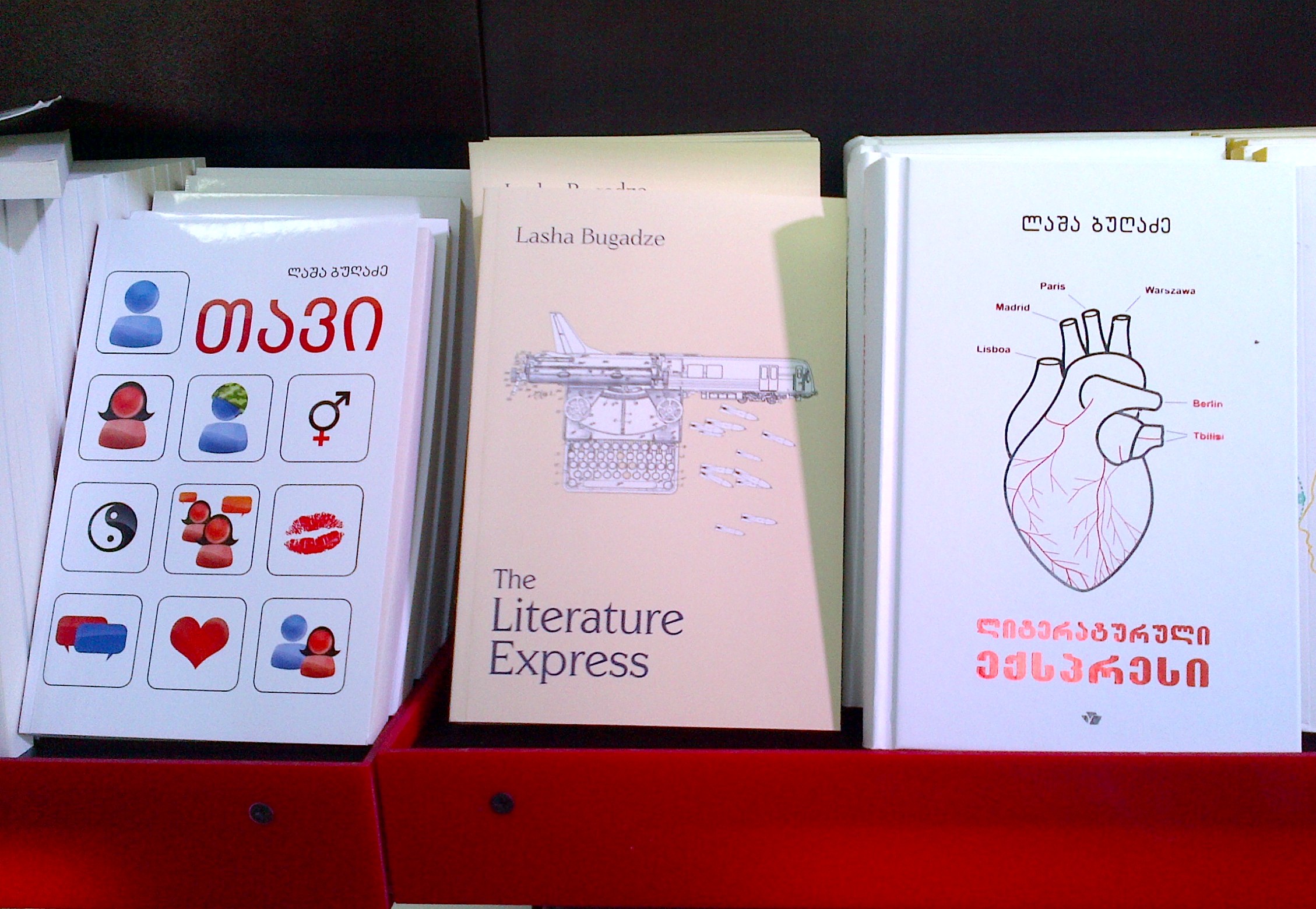 We held our  first translation workshop in Georgia in September in order to produce quality translations of six contemporary Georgian poets for the next anthology in our series with Arc publications – New Voices from Europe and Beyond. Following our trip we’ve compiled a sampler of recommended Georgian literature and culture in English translation.

Participating poet Gaga Nakhutsvrishvili became famous after reading this poem in a film in the 1990s:

Here Stephen Watts reads a translation at the workshop alongside Gaga:

Three of the poets who will be in the anthology – Rati Amaglobeli, Maya Sarishvelili and Shota Iatashvili – have profiles on Poetry International with poems translated into English by Donald Rayfield. You can also listen to recordings of the poets reading each of their poems (particularly important for Rati Amaglobeli’s musical and breakneck-speed reading style!).

Also online you can find Shota Iatashvili’s short story My Story of Chess in Words Without Borders.

A comprehensive history of Georgian literature – from the creation of the Georgian alphabet to the present day – has been written by Donald Rayfield: The Literature of Georgia: A History (2000, revised 2010).

Lasha Bugadze’s novel The Literature Express came out recently in English translation (Dalkey Archive, trans. Maya Kiasashvili): ‘A bevy of mediocre writers are invited to a seminar aboard a specially chartered train, and this novel tracks their progress across Europe: bitter, bickering, and self-absorbed. Aboard this Literature Express is a Georgian author whose love for the wife of his own Polish translator seems as doomed as his hopes for international success; worse still, it seems all the novelists congregated on The Literature Express intend to write their next books about their time on the train… Can our Georgian author compete?’

Georgian Poetry: Rustaveli To Galaktion is an anthology translated by Lyn Coffin with Gia Jokhadze,  introduced by Dodona Kiziria and published by Slavica Publishers/Indiana University. This book introduces the work of nine poets through the history of Georgian poetry with poems presented in dual language. Starting with the work of the twelth century poet Shota Rustaveli it runs up until the twentieth century poet Galaktion Tabidze.

Galaktion Tabidze was a very important figure in Georgian poetry. He was unparalleled in his clever use of the Georgian language (particularly in rhyme), refreshing and modernising poetry for the twentieth century. Here is a poem in English translation by Adam J Sorkin  and Nana Bukhradze – What time is it?. And, also in Words Without Borders, a poem featuring Galaktion from 1924 by Terenti Graneli Galaktioni and I.

Contemporary Georgian Fiction  is an anthology of prose from 20 writers from Rezo Gabriadze (b.1936) to Nino Tepnadze (b.1992) translated and introduced by Elizabeth Heighway. It was published by Dalkey Archive Press in 2012 as part of their Georgian Literature Series.

James Hopkin wrote this introduction to Georgian literature in The Times in 2008.

Irakli Charkviani was an iconic figure in Georgian alternative culture in the 1990s. He was known for his eclectic music as well as his poetry. His rebellious lyrics and performances became immensely popular and he became known under a pseudonym ‘Mefe’ (the King). You can find several of his tracks online including live performances. Below he performs his song Mazoni – (a kind of sour yogurt) which was originally written in English.

And finally a silent film classic. My Grandmother was made by Soviet Georgian director Kote Mikaberidze in 1929 and banned by the Soviet regime for 40 years. A satire on the Soviet state system it was given a jazz soundtrack by Beth Custer and the captions are read in English translation in this version below.

If you know of any novels, poems, films or other work in English translation that you think we should add to our list, get in touch with us!