Europe has a rich and diverse literary culture. From poets to playwrights and novelists, from non-fiction writers to spoken word performers, many voices in many languages contribute to the growing body of European literature. But how aware are we of the full wealth of writing created across Europe? To highlight the diversity of the European literary scene and to discover new voices, a group of individuals and organisations got together in 2001 to establish Literature Across Frontiers with support from the Culture Programme of the European Union.

Our aim was complex yet simple: to advance intercultural dialogue through literature and translation, and to highlight Europe’s literary diversity to new audiences. Fifteen years later, LAF is a unique platform which connects literary scenes across Europe and beyond, combining artistic practice with policy debate and reflection on the rapidly changing environment in which we work, communicate and create.

From our base in Wales, we work with a range of partners abroad and in the United Kingdom, including our sister organisation, Wales Literature Exchange. We act as a catalyst, creating contacts, connections and collaborations across national and linguistic borders. We bring together individuals and organisations who operate in very diverse language contexts as far as numbers of speakers, literacy levels, cultural infrastructure, official and non-official status are concerned, and we actively advocate for linguistic and cultural rights, as well as freedom of expression. Our work has given rise to initiatives and projects which have gained a life of their own and are now part of a widening ripple effect that reaches beyond Europe into the Middle East, South Mediterranean and Asia.

However, LAF is significantly more than the sum of its activities and achievements. What singles LAF out is the distinctive balance of rigour and flexibility in the way it operates. Being a hub for contacts between individual literary practitioners, as well as an interface between independent cultural organisations, private enterprises and government bodies and institutions which support cultural activities, LAF is not only a resource but primarily an enabler and multiplier.

The enabling role of LAF derives, above all, from the people we work with in a common pursuit of new ideas, developments and initiatives; a community growing together not just in numbers and volume, but in the deeper sense of sharing in a maturing process of collaboration. A sustainability arises from this process of collaboration, a resilience and resourcefulness which has made it possible for us to thrive and develop for the past fifteen years.

In our common endeavour there is an on-going flow of ideas and information; we share resources and build an infrastructure that becomes stronger than what is available at a local level. In this way LAF expands and invigorates not only the scope of its activities but also the conceptual framework within which we think of literature and nurture its role in society.

As we prepare to celebrate our 20th anniversary next year, we find ourselves living in a landscape of great global change and uncertainty. Our work today in fostering understanding between cultures is more important than ever. In  our 15th anniversary publication, we looked back at our work to date and pay tribute to the creative efforts of the many people who have over the years contributed to what Literature Across Frontiers is today and to its mission of making literature travel. 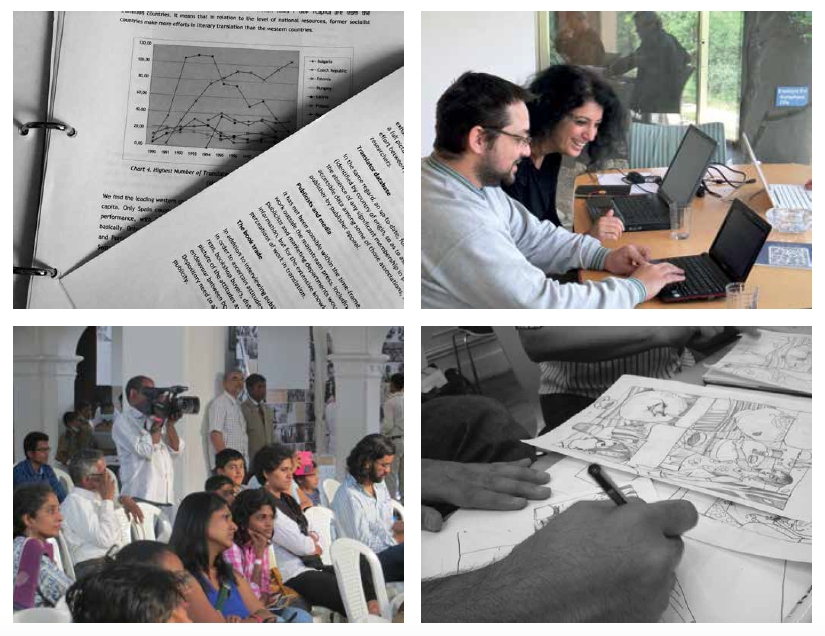