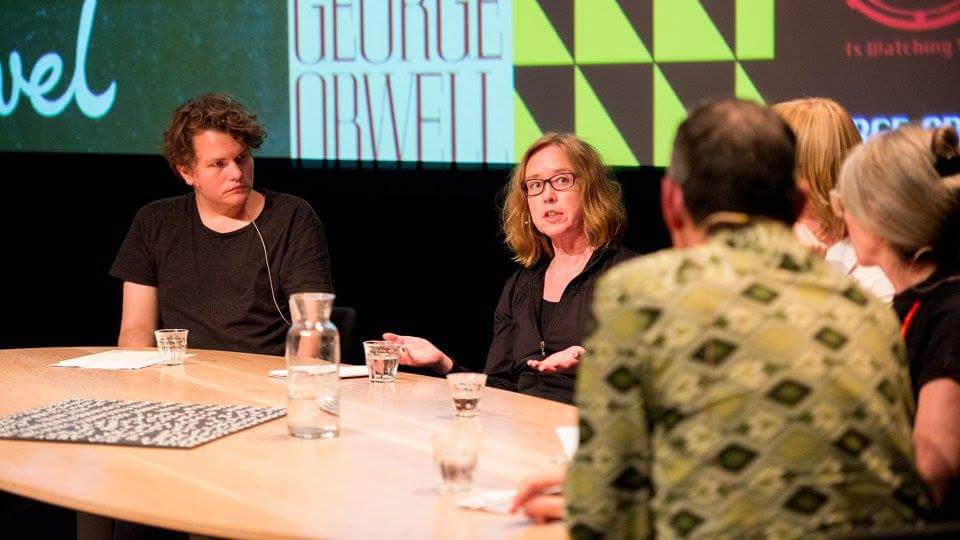 Poetry International festival, held annually in Rotterdam might be one of the most famous poetry festivals in the world. It’s often talked about as Europe’s top poetry festival (although there are some very strong contenders for that title!). It’s certainly the festival that poets themselves eagerly await an invitation to. Why?

Partly it’s the frame the festival provides – the backdrop of the city of Rotterdam and its pretty regenerated streets, the loyal attentive people that crowd the venues for the readings. On the opening night of the 2016 festival an audience of 700 came to listen to all of the featured poets, an impressive figure for festival of poetry in Europe!

Of course it perhaps helped that the time of my first visit – June 2016 – was blessed with just about perfect weather; people sat out in the street outside the venue sipping beer and browsing books from the festival stall or the checking out the eccentric ‘Itinerant Poetry Librarian’s’ catalogue. Poets rapped in street next to a big red poetry bus.

The programme is extensive and varied including café-style chats, short and longer readings, interviews and panel discussions. Audiences get the chance to hear a substantial portion of each poet’s work which is projected on a screen in Dutch and English translation alongside a carefully-selected piece of contemporary art.

The festival also features daily Art and Gallery tours where visitors cycle or walk to a series of galleries across the city, one of which will host a poet performing their work against the gallery’s setting. These tours embed poetry not only in the thoughtful context of contemporary art but also in Rotterdam’s architecture and urban environment.

Another thing that makes this festival famous is its ever-expanding Poetry International Web. All the poets at the festival have their poems in the original and in translation made available on the site together with recordings of readings. The site also features poets from all across the world and is probably the number one resource for global poetry in Dutch and English translation.

The festival also invites us to think deeply about the current situation of poetry and the world through its thematic discussions. This year talks were held under the topic of Newspeak – the language of George Orwell’s 1984, invented by the authorities of ‘IngSoc’ to erase all possibilities of doublethink, that is, double meanings or ambiguities which invite rebellious thinking. The talk I attended on this theme explored the position of language in today’s world and invited us to listen closely to the current media-sphere where simplified thinking and distorted language makes a new Newspeak, or News-speak (to break the rules of Newspeak and add a new meaning to the word). Poetry analyses then breaks apart and makes anew the simplified language of Newspeak.

Of course it’s not just these practical elements of organisation, reputation, resources and concept that put the the festival up there with the world’s best. It’s fundamentally the brilliant poets from across the world the festival programmes each year.

This year they ranged from the up-and-coming stars Sonja vom Brocke (Germany), Maarten Van Der Graaff (Netherlands) and Laura Accerboni (Italy), who I was delighted to discover for the first time, to the radically avant garde and politically fierce work of Aase Berg (Sweden), Lisa Robertson (Canada) and Raúl Zurita (Chile). There was comic absurdity and brilliance from Morroccan poet Abdel-Ilah Salhi’s poem ‘running in the opposite direction of beer’, sublime lyrical work from Barbara Pogačnik and Esther Kinsky and much much more, all quite impossible to summarise.

Check out the poems at poetryinternational.net or the readings on Poetry Interantional’s Youtube channel.