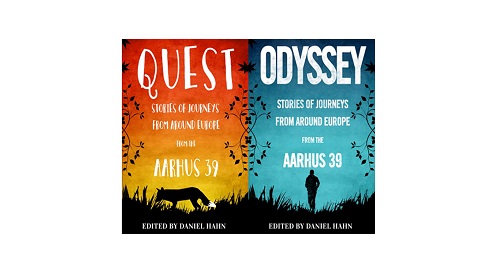 Michael Rosen discusses different journeys through life with writers whose stories have been selected for the Hay Aarhus 39 anthologies QUEST and ODYSSEY: stories of journeys from around Europe. Selected by three of Europe’s top authors – Matt Haig (UK), Kim Fupz Aakeson (Denmark) and Ana Cristina Herreros (Spain) – some of the best emerging writers for young people from across wider Europe have contributed to the collections.

Rosen will talk to Dy Plambeck and Sanne Munk Jensen from Denmark, Sandrine Kao from France and Maria Turtschaninoff from Finland. The event will explore how stories can bring people together through shared experiences.

Sandrine Kao (1984), born in the Paris region and of Taiwanese origins. She is an author and illustrator for young people. After studying publishing at the University of Paris X, and illustration at the École Supérieure d’Art d’Épinal (Vosges), she gained a Master in children’s literature at the University of Cergy-Pontoise. Sandrine Kao’s first picture books were published in 2008 by éditions Gecko. Her first novels were published by éditions Syros under the Tempo label, a collection of realist and contemporary novels for age ten plus. She has also worked as an illustrator for éditions Grasset jeunesse or Utopique.

Sanne Munk Jensen (1979) is a firmly established voice in Danish youth literature. Her acclaimed youth novel Closest debuted in 2002, and was followed by the breakthrough One day the sun shines also on a dog’s ass (2007), which was a commercial success and earned her Gyldendal’s Børnebogspris award and Orla Prize. The independent successors Satan’s Brood (2010), Arangutang (2012) and You and Me at Dawn (2014) were each acclaimed by readers and critics alike. Aside from being an author, Sanne Munk Jensen is also a screenwriter and has written several films and TV-shows for children.

Dy Plambeck (1980) was born in the northern part of Zealand. In 2004 she graduated from the Danish Writer School, and published her first book Tales from Bure Lake in 2005. Since then she has published the novels Texas’ Rose (2008), Godfather (2011), Mikael (2014) and the childrens’ books The Bloomtown Kids (2011-2015) and The Hill of Dreams (2008). Her work has garnered critical and popular acclaim. All of her books have been bestsellers in Denmark, and she has received several awards. Books have been translated into Swedish and Norwegian, and there have been excerpts of her books in a variety of European and American literary magazines.

Maria Turtschaninoff is a Swedish-speaking Finn who has been writing fairy tales from the age of five. After a detour as a journalist for a few years, Turtschaninoff debuted in 2007 with a middle-grade portal fantasy and has since published four more novels, all YA fantasy. Maresi won the prestigious Finlandia Junior Award in 2014, has been sold to 18 territories and has been getting rave reviews in publications such as The Guardian, The Financial Times, The Telegraph, The Daily Mail and Metro UK. The latest novel, Naondel, was out in Finland and Sweden in the fall of 2016 and is soon to be released in the UK.