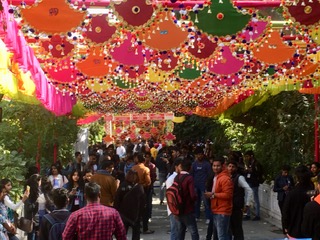 Winter in India is a literary season that stretches from September until February with an array of literary festivals across the entire sub-continent. Having brought authors to Indian festivals for a decade, this year we organised a professional visit to three festival cities: Kolkata, Jaipur and Thiruvananthapuram, with a stop in Delhi where we met with representatives of cultural institutions and diplomatic missions, including the EU Delegation in India during a literary evening, as well as meeting with students at the Vedica Post-Graduate Programme for Women. The participants attended the Kolkata Literary Meet, in Jaipur they spoke about their work at the Jaipur Book Mark, the b2b segment of the legendary Jaipur Literary Festival, and in Thiruvananthapuram or Trivandrum, as it’s still known, they took part in the Mathrubhumi International Festival of Letters. 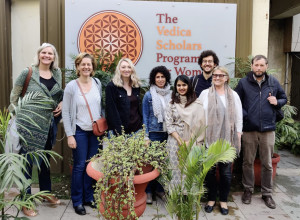 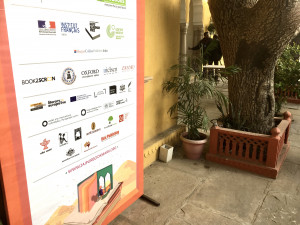 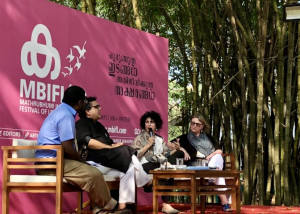 Literary professionals from Belgium, Georgia, Israel, Latvia, Switzerland and United Kingdom participated in the visit alongside the following authors: 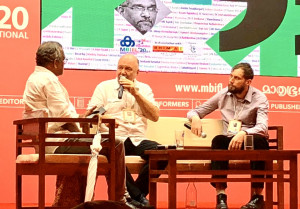 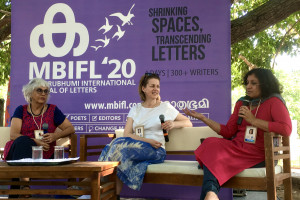 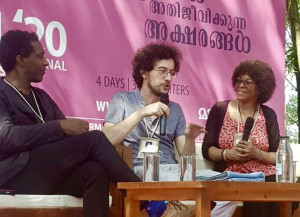 Abo Iashaghashvili  (1977) is a Georgian novelist who has studied history and philosophy in Tbilisi, Munich and Berlin. An enthusiastic traveller, he found his ideal job as a guide in the magnificent mountains of his native country. Before taking tourists to the mountains, Abo always guides them around the capital Tbilisi, where many diverse cultures – Georgian, Persian, German, Armenian, Greek, Russian, Kurd, Ottoman, Jewish – have co-existed over the centuries. Tbilisi is also his inspiration a cycle of historical novels set in the city in the 19th century: Turkish March (2014) was followed in the same year by a second novel, Royal Mary, which won the prestigious SABA award for the best novel in 2015. The author is working on his third novel and contributes short stories and articles to literary journals and magazines.

Nora Ikstena (1969) is one of the most influential and widely read Latvian writers. Her novels includeSoviet Milk (2015), Besa (2012), Celebration of Life (1998), The Virgin’s Lesson (2001), and Amour Fou (2010) which has been adapted for stage. She is also a prolific author of biographical fiction, non-fiction, scripts, essays and short prose, Her collections Life Stories (2004) was published in English in 2013, and Hindi in 2015. She is an active participant in Latvia’s cultural and political life, and a co-founder of the International Writers and Translators’ House in Ventspils. She received the Baltic Assembly Prize for literature in 2006. Her novels have been translated into sixteen languages, including English, Danish, German, Italian, Norwegian, Russian and Swedish.

Vilis Kasims (1986) is a Latvian author, translator and literary agent. He has translated close to 20 books from English and Russian, including Bob Dylan’s Chronicles, Sergei Dovlatov’s The Zone and Lev Grossman’s Magicians trilogy. His first novel Lielā pasaulē (The Great Big World) came out in 2015, and his second book, a short story collection titled Dažas no mūsu dzīvēm (A Few of Our Lives) is forthcoming in 2020. As a literary agent, Vilis Kasims has been visiting various bookfairs across Europe and Asia since 2015 to facilitate selling rights to the works of Latvian authors and to promote Latvian literature abroad on behalf of the publicly funded Latvian Literature Platform.

Rachel Trezise (1978) is a novelist and playwright from the Rhondda Valley in South Wales. Her debut novel In and Out of the Goldfish Bowl won a place on the Orange Futures List in 2002. In 2006 her first short fiction collection Fresh Apples won the inaugural Dylan Thomas Prize, the biggest international award for an English-language emerging writer. Her second short fiction collection Cosmic Latte won the Edge Hill Prize Readers Award in 2014. Her first play Tonypandemonium was produced by National Theatre Wales in 2013 and won the Theatre Critics of Wales Award for best production. Her second play for National Theatre Wales, We’re Still Here, premiered in September 2017.  Her latest play, Cotton Fingers, also for National Theatre Wales, has recently toured Ireland and Wales. At the Edinburgh Fringe Festival 2019 it was chosen by The Stage as one of the best shows in the festival and received a Summerhall Lustrum Award. Her debut novel has recently been reissued in the Library of Wales series, a project re-publishing classic Welsh literature in English.

The visit was organised as part of the Literary Europe Live project supported by the Creative Europe Programme of the European Union and was co-financed by Arts Council of Wales, Latvian Literature, Literature House of Georgia, Passa Porta International House of Literature and Pro Helvetia.