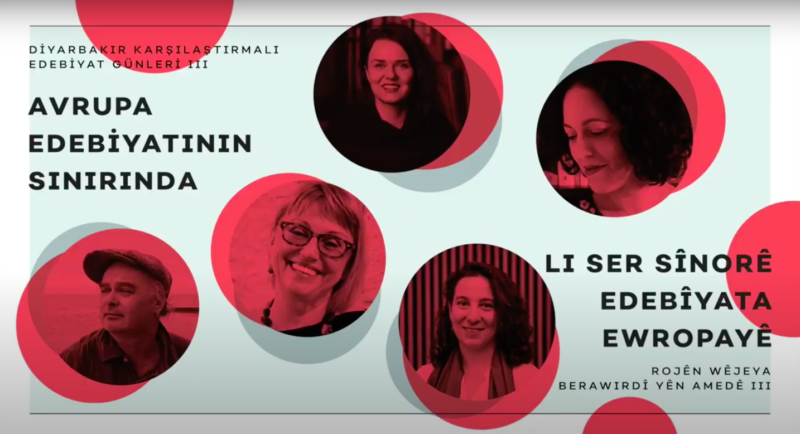 ‘European Literature on the Edge’ was a panel debate organised in cooperation with the Diyarbakir Literature House.

This debate was streamed during the Diyarbakir Literature Days festival in October 2020. You can watch the debate here: https://www.youtube.com/watch?v=dhIEGsiGCBk&t=1s

Clare Azzopardi (1977) is an award-winning Maltese writer of books for children and adults.  Her work has been translated into several languages and her latest book of short stories Kulħadd ħalla isem warajh (The names they left behind) was published in Croatian, Hungarian, Slovenian and Arabic. Her books for young readers include trilogy, a series of ten novellas, and several picture books, one of which she also turned into a libretto for a children’s opera. She is Head of Department of Maltese at the University of Malta Junior College and an active member of Inizjamed, an NGO whose mission is to promote literature in Malta and abroad. With Inizjamed, she has co-organised literary festivals and workshops, often in collaboration with Literature Across Frontiers.

Alexandra Büchler is director of Literature Across Frontiers, the European Platform for Literary Exchange, Translation and Policy Debate. She has developed a range of initiatives aimed at fostering literary exchange and translation in Europe, and between Europe and other global regions. A translator and editor, she has close to thirty publications to her name, including novels, short stories, anthologies of translated fiction and books on modern art and architecture. She edited New Voices from Europe and Beyond, a series of contemporary poetry anthologies from Arc Publications for a decade. Her latest publications are the English translation of a Czech modern classic The House of a Thousand Floors (2016) by Jan Weiss, and Zero Hours on the Boulevard (2018) an anthology of stories by young authors from Wales and the rest of Europe.

Julia Fiedorczuk is a Polish poet, prose writer, translator and lecturer of American literature at Warsaw University. She has published six collections of poetry, two collections of short stories and two novels. She was part of the international literary project Metropoetica: Women Writing Cities, co-organised by Literature Across Frontiers. and is a regular contributor to the feminist magazine Zadra (Splinter). Much of her work is associated with ecocriticism and is often attributed for popularising the ecopoetry genre. Her collection of poetry Psalmy (Psalms, 2017), won the Wisława Szymborska’s Poetry Award, seeks to include and represent those without a voice, by mourning those who lost their lives in war, but also for species and ecosystems that have become irrevocably lost. Her poems have been translated into many languages, including English, Swedish, Czech, Japanese, and Welsh.

Niall Griffiths (1966) has been a prominent voice on the Welsh literary scene since his first novel Grits (2000) introduced him as a distinctive vernacular narrator. Twice the winner of the Wales Book of the Year Award, with his fourth novel Stump (2003) and his latest, Broken Ghost (2019), which tackles themes of austerity and social breakdown. The Dreams of Max and Ronnie is a retelling of The Dream of Rhonabwy in the New Stories from the Mabinogion series by the Welsh publisher Seren. His novel Grit was adapted for television and Kelly and Victor (2003) was made into a feature film, and his work has been translated into a number of languages. He also published a collection of poetry Red Roar: 20 Years of Words (2015), two travel guides to Aberystwyth and Liverpool, and Ten Pound Pom (2011), part memoir, part travelogue about Australia, where he lived as a child.

Our cooperation with the Diyarbakir Literature House was part of the project Literary Europe Live Plus supported by the Creative Europe Programme of the European Union.