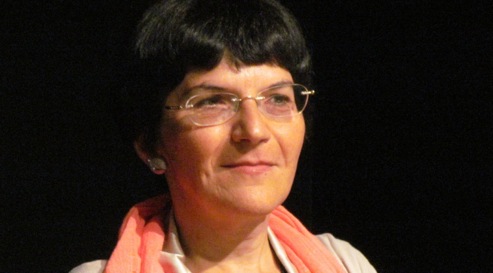 Meet three of the winners in London

The European Union Prize for Literature was launched in 2008 with the aim of “putting the spotlight on the creativity and diverse wealth of Europe’s contemporary literature in the field of fiction”. The prize, awarded each year to emerging authors selected by national juries from eleven or twelve European countries, is coordinated by the European Booksellers Federation (EBF), the European Writers’ Council (EWC) and the Federation of European Publishers (FEP). In 2013 the prize completed its second round of Europe and prepares to embark on a new three-year cycle. What has been its impact?  Has it made new voices of European literature heard in translation? Three EUPL 2013 winners Marica Bodrožić (Germany), Katri Lipson (Finland) and Ioana Pârvulescu (Romania) discuss their work and its place in the European literary scene with arts journalist Rosie Goldsmith.

Marica Bodrožić was born in 1973 in Svib, Croatia, in the former Yugoslavia. She moved to Germany at the age of ten and learned German, which she now sees as her “second mother tongue”. German also became her language for creating literature. Bodrožić has published three novels, as well as collections of short stories and poems. Her awarded novel, A Cherrywood Table (Kirschholz und alte Gefühle, 2012), has been described as “a poetic work that thoroughly explores memory and remembrance.” Borodžić, who lives in Berlin, has received many prizes and awards, including the Hermann Lenz Award in 2001, the 2008 Initiative Prize, the 2009 Special Prize for Outstanding Emerging Artists awarded by the Bruno Heck Prize Scholarship, the 2011 Liechtenstein Prize for Literature (Poetry Section), and the 2013 LiteraTour Nord Prize. Katri Lipson was born in Helsinki in 1965. After secondary school, she studied medicine in Sweden and graduated from the Medical School of Uppsala University in 1993. Since then, she has been working as a doctor in Sweden, Africa and Finland. She has always written, including fairytales, short stories, poems, plays and novels. Her debut novel, Cosmonaut (Kosmonautti), was nominated for the respected Finlandia Prize in 2008 and won the Helsingin Sanomat Debut Book of the Year Award in 2008. Her second novel, The Ice-Cream Man (Jäätelökauppias), was published in 2012. She lives with her family in Vantaa, Finland. Ioana Pârvulescu (pictured above) was born in Braşov in 1960. She graduated from the Faculty of Letters at the University of Bucharest in 1983, establishing herself as a distinct voice within literary circles. Since 1996, she has taught modern literature at the same faculty, and earned her  PhD in 1999 with a thesis entitled Literary Prejudices: Comfortable Options in Interpreting Romanian Literature (Prejudecăţi literare. Opţiuni comode în receptarea literaturii române). She has worked as editor at Humanitas Publishing House and at the literary journal Literary Romania (România literară), and has also translated from French and German several books by Maurice Nadeau, Angelus Silesius and Rainer Maria Rilke. She is a member of the Romanian Writers’ Union and a founder member of the Comparative Literature Society in Romania. She was awarded the EUPL for her novel Life Begins on Friday (Viaţa începe vineri, 2009).