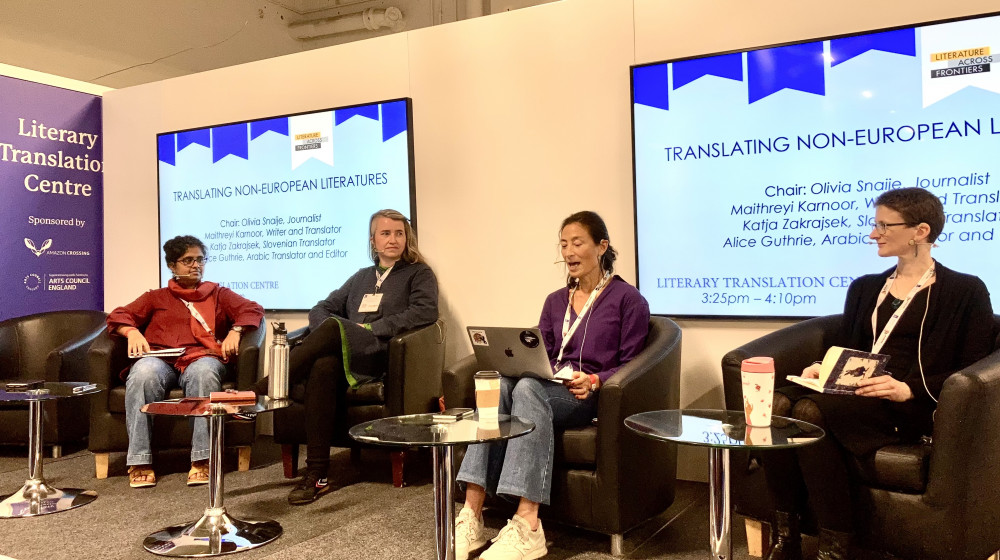 After a two-year pause we took part again in the London Book Fair as one of the organisations coordinating the Literary Translation Centre, a space and stage dedicated to debates about literary translation. The Centre was established in 2010 and has been one of the most successful book fair venues with its programme attracting a large crowd interested in the latest in literary translation discourse. We attended the fair with three translators who started their residencies with us in Aberystwyth following the fair, Maithreyi Karnoor form India, Nataša Srdic  from Serbia and Katja Zakrajšek from Slovenia who are participating in the Ulysses Shelter project of exchange residencies for young writers and translators.

Maithreyi Karnoor, our Charles Wallace India Trust fellow and translator from Kannada, was panelist in our session Translating non-European Literatures, together with Katja Zakrajšek, a translator from English, French and Portuguese into Slovenian, and Alice Guthrie, translator from Arabic for the Uk and Us market. The session, moderated by cultural journalist Olivia Snaije, responded to the recent debates around decolonisation of literary translation and examines the cultural, political and economic implications arising in the context of translating and publishing writing from outside the ‘Eurosphere’.

Maithreyi also spoke in a session organised by the British Council to present their recent report on publishing in Indian languages, prepared by Art X, with speakers Dr Padmini Ray Murray, Research Lead at Art X and Jayasree Kalathil, writer and translator. The session was moderated by Rebecca Hart, Senior Literature Programme Manager at the British Council.

The ‘India Literature and Publishing Sector Report’ focuses on the publishing dynamics in a country with twenty-three official languages where  English serves as a major bridge language. The report delves into some of the challenges faced by the sector including the quality and kinds of translations, limited visibility of translators, and the lack of accessibility towards Indian literature in translation among international publishers.

With support from Arts Council of Wales, Charles Wallace India Trust and Creative Europe Programme of the European Union.