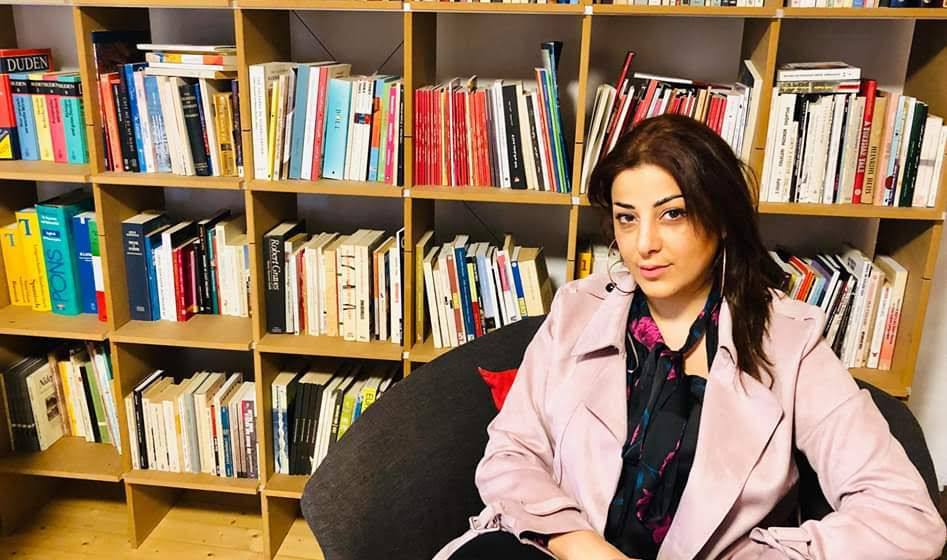 War, in so many words was the title of a debate LAF contributed to the Pune International Literary Festival as part of our project Literary Europe Live Plus supported by the Creative Europe of the European Union. We visited the festival in September 2019 with a tour we organised with winners of the European Union Prize for Literature, supported by the Cultural Relations Platform in Brussels.

War and its human cost is the focus of this session with three writers from Europe whose work reflects the continued political turmoil of the 20th and 21st century, from the two world wars, the Holocaust and the Nakba, to the more recent conflict in the Middle East that has created a new diaspora. Three authors from Europe—Ghayath Almadhoun, Siân Melangell Dafydd and Rabab Haidar—spoke about their experience of war and its aftermath in a debate moderated any Alexandra Büchler. 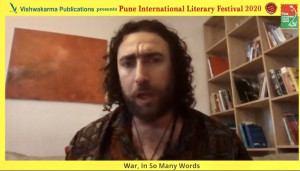 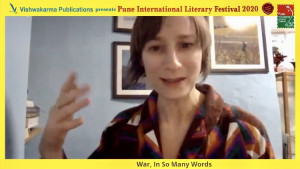 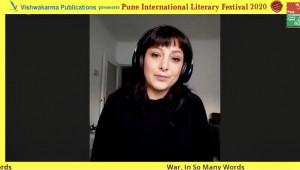 Ghayath Almadhoun is a Palestinian-Syrian poet born in Damascus in 1979 who settled in Stockholm in 2008. He has published four poetry collections in Arabic and his work has been translated into fifteen languages. He has collaborated with other poets and artists and his poetry has been part of work by US artist Jenny Holzer and German musician Blixa Bargeld. His latest collection Adrenalin, published in English by Action Books 2017 in Catherine Cobham’s translation, was among SPD Poetry Bestsellers in the US for four months and was nominated for the 2018 Best Translated Book Award. His selected poems Ein Raubtier namens Mittelmeer (Predator called the Mediterranean) translated into German by Larissa Bender (Arche Verlag, 2018) ranked top of the Litprom-Bestenliste 2018 of best books translated into German. He was granted the one year-long DAAD Artists-in-Berlin Program award scholarship and is now based in Berlin. His poetry film Évian won the Zebra Best Poetry Film Award 2020. https://www.ghayathalmadhoun.com/

Siân Melangell Dafydd is an author, poet and translator. Her first novel Y Trydydd Peth (The Third Thing, Gomer, 2009) won the coveted National Eisteddfod Literature Medal in 2009 and she was the last co-editor of the iconic Welsh-language literary magazine Taliesin. Her latest novel Filò (Gomer, 2019) traces the story of Italian prisoners of war sent to work on farms in Wales. She writes in both Welsh and English and often collaborates with authors and poets internationally to translate literature between minority languages. She works as a lecturer in Creative Writing at the American University of Paris, France, and is course leader of the MRes in Transnational Writing at Bath Spa University, England. She has collaborated with Indian poets and was one of the participants in the project Poetry Connections India-Wales, organized by Literature Across Frontiers to mark the 70th anniversary of independent India. A Different Water (2018) is the outcome of her collaboration with the Malayalam poet Anita Thampi. She revisits the project in a short video: https://youtu.be/X3kPes6WULw

Rabab Haidar is a Syrian novelist, journalist and translator from Latakia living in Berlin. She majored in English literature at the University of Damascus. After graduation she lived in the Gulf, Africa and Europe. She came back to Syria before the revolution and started working as a writer and journalist. Her first novel The Land of Pomegranates, tracing the lives of three women from the Alawite minority in Syria, was published in Arabic in 2012. She has completed two more novels which she has put on hold to reassess in her new situation. She was awarded a Heinrich Böll scholarship in 2018 and has lived in Germany since. She participates in the project Weiter Schreiben (Writing On) which pairs immigrant and German authors to work together and translate each other’s writing. She has been writing for Die Zeit, and is on the editorial team of Abwab, the Arabic newspaper in Germany.

You can watch the recording on the festival’s Facebook page:here

The debate was part of the Literary Europe Live Plus project supported by the Creative Europe Programme of the European Union.