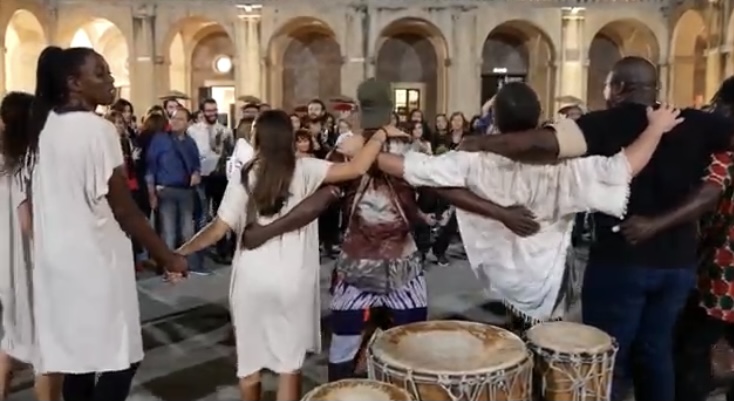 This year, our project Literary Europe Live Plus contributed to the programme of  SabirFest, the festival of Mediterranean culture and citizenship, to highlight the contribution of refugees and migrants to Europe. The theme “riparare l’umano” sums up the festivals concerns and impact.

The Cameroonian writer and performer Eric Ngalle Charles, who has settled in Wales, spent two weeks in residence joining a local group of dancers and musicians in the project Nimba-Etna that focused on links with the African immigrant community through exploration of folk mythology and twinning of two majestic volcanoes, Etna and Nimba, the latter located on the border of Ivory Coast and Guinea. Three performances took place in Catania, Messina and Reggio di Calabria, alongside workshops with young people. The artistic director of the project is Carlo Condarelli.

LAF Director Alexandra Büchler spoke on a panel “Investing in the Mediterranean” in the SabirMaydan part of this sprawling festival that takes place in three locations, Catania, Messina and Reggio Calabria.

Watch a video about the Nimba Etna project here.

Photo from the performance in Catania.

With  support from  Creative Europe Programme of the European Union and Wales Arts International.