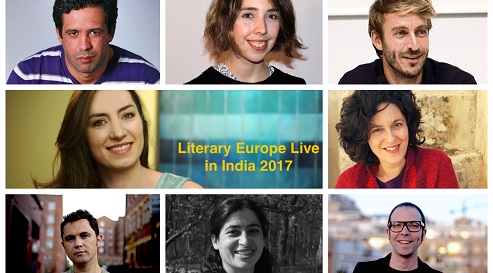 Literature Across Frontiers presents the up-and-coming generation of European writers as part of its flagship project Literary Europe Live. Twelve writers will meet Indian audiences, publishers and journalists at six literary festivals of the winter season to discuss a range of topics and read from their work, bringing Europe and India closer in a literary dialogue.

You can see the event brochure below:

A writer, translator, literary critic and assistant magazine editor who was born in Portugal in 1978, Bruno Vieira Amaral is one of the most promising and distinctive new voices in Portuguese writing today. His debut novel As Primeiras Coisas (The Former Things, 2013) is the first book to scoop up four major literary prizes; in 2013 it was awarded the Time Out Lisboa’s Book of the Year, Fernando Namora Literary Prize, PEN Narrative Prize and in 2015 the José Saramago Prize. He is one of 10 New Voices from Europe 2016, selected by Literary Europe Live.

Born in Malta in 1977, Clare Azzopardi is an award-winning writer who writes for both children and adults. Her body of work includes poems, plays, short stories for adults, picture books for young readers and short novels for older children and young adults. Her first short story collection Il-Linja l-Hadra (The Green Line) was published in 2006 and she is currently working on her first novel. She lectures in Maltese Literature at the University of Malta Junior College. She is one of 10 New Voices from Europe 2016, selected by Literary Europe Live.

Azzopardi gives us pictures of a young society living often on the razor’s edge…
(Paul Xuereb, Times of Malta)

Rumena Bužarovska is the author of three short story collections – Čkrtki (Scribbles, Ili-ili, 2007), Osmica (Wisdom Tooth, Blesok, 2010) and Mojot maž (My Husband, Blesok, 2014; Ili-ili, 2015). She is a literary translator from English into Macedonian and her translations include Lewis Carroll (Through the Looking Glass), J.M. Coetzee (The Life and Times of Michael K), Truman Capote (In Cold Blood) and Richard Gwyn (The Colour of a Dog Running Away). She is Assistant Professor of American Literature at the State University of Skopje in the Republic of Macedonia, where she was born in 1981. Rumena Bužarovska is one of 10 New Voices from Europe 2016, selected by Literary Europe Live.

Rumena Buzarovska is a master of nuanced psychological portrayal whose female characters tell ordinary stories of life in post-communist Macedonia of shiny boutiques and commerce, set against a background of corruption, poverty and violence.
(Mika Buljevic, Booksa)

Nia Davies is a poet based in Wales. Her publications include Then spree (Salt, 2012), Çekoslovakyalılaştıramadıklarımızdanmısınız or Long Words (Boiled String, 2016) and a full-length collection All fours is out from Bloodaxe in 2017. She edits the international magazine Poetry Wales and has collaborated on several transcultural and interdisciplinary projects. Her poems and essays have been published and translated internationally. She is interested in performance, translation, storytelling and ritual.

Nia Davies’s poems are sharply attentive to the realm of the ‘inner ear’, a meeting point of external and internal environments. The lines have their own intense music, but instead of approaching song’s recognition and resolution they push towards the unfamiliar.
(Zoë Skoulding)

Born in Granollers in 1982, Albert Forns is a journalist and award-winning Catalan writer. He works for the magazine Time Out Barcelona, the newspaper ARA and the cultural center CCCB. As a writer, he has published two novels – Jambalaia (Anagrama, 2016) which won the Anagrama Prize, and Albert Serra (la novel·la, no el cineasta) (Empúries, 2013) which picked up the Documenta Prize. He has also published a volume of poetry Ultracolors (LaBreu Edicions, 2013), inspired by the work of contemporary artists. He regularly writes on theatre, literature and visual arts for his blog as well as for Time Out magazine and the digital magazine Núvol.com. He is one of 10 New Voices from Europe 2016, selected by Literary Europe Live.

One of the most original and thought-provoking voices of new Catalan prose.
(El Mundo)

Eluned Gramich is a Welsh-German writer and translator. She studied English Literature at Oxford and has an MA in Creative Writing (Prose) from UEA. Her short fiction has been published in anthologies and magazines, including New Welsh Short Stories, Stand, Rarebit, Planet, Taliesin and World Literature Online. In 2015, she translated a German short-story collection by German Book Prize shortlisted author, Monique Schwitter, entitled Goldfish Memory (Parthian). Her memoir of Japan, A Woman Who Brings the Rain, won the New Welsh Writing Award 2015 and was shortlisted for the Wales Book of the Year 2016. She currently lives and works in Germany.

Javier Montes is a writer, translator and art critic. In 2007, he received the José María Pereda Prize for his first novel, Los penúltimos (The Last but Ones) followed by Segunda parte (The Sequel, 2010 and, Hotel Life (2012), also published in English, and the essay Stranded in Rio (2016). In 2010, the magazine Granta included him among their selection of the best young authors writing in the Spanish language. He regularly contributes to periodicals ABC, El País, Letras Libres, Revista de Libros, Granta UK, Revista de Occidente and Letra Internacional. He has curated exhibitions , for example Beckett Films (CAAC, 2011) and taught Art History at the Spanish College in Malabo (Equatorial Guinea). As a translator he has focused on critical publication and research into the works of Shakespeare: he has published version of Cymbeline, King Lear and Coriolanus, as well as the essay Shakespeare y la música (Shakespeare and music, 2009).

Marina Perezagua (Seville, 1978) is a Spanish writer currently living in New York where she used to study and teach at NYU. She is the author of two short story books Criatures abisales (Abyssal Creatures, 2011) and Leche (Milk, 2013), and two novels Yoro (2015) and Don Quijote de Manhattan (The Don Quijote of Manhattan, 2016). Her books have been illustrated by Aron Wiesenfeld and Walton Ford, who recently illustrated the last album of The Rolling Stones. Her books Leche and Yoro are being translated into Japanese, German, Italian, Hungarian, Portuguese, Polish and English (to be published by Ecco Press in late 2017). Her novel Yoro was recently awarded the Prize Sor Juana Inés de la Cruz by the Guadalajara Book Fair.

María Reimóndez is a Galician translator, interpreter, writer and activist. She has published poetry collections such as Moda Galega (Galician Fashion, 2002) and Presente Continuo (Present Continuous, 2013); novels for both adults and children such as O club da calceta (The Knitting Club, 2006, translated into Italian, Spanish and French, with a theatre adaptation by Teatro do Morcego and a film version produced by Ficción Producciones), En vías de extinción (Endangered Species, 2014, translated into Spanish), A música dos seres vivos (The Music of Living Beings, 2015) and essays. She has received several prestigious awards in Galicia including the Xerais novel award for Dende o conflito (Conflict Zones, 2014), the Plácido Castro award for translation and the Award for Author of the Year by the Galician Publishers Association in 2014. She has a long connection to Tamil Nadu and has translated authors such as Salma, Kutti Revathi, Malathi Maitri, Sukirtharani and Thamizhachi into Galician.

Gemma Ruiz Palà (Sabadell, 1975) is a Catalan journalist and writer. She has worked since 1996 in the news service of Televisió de Catalunya (Catalan Television) where she has specialised in cultural reports. Her debut novel Argelagues (Gorse), portrays, throughout the twentieth century, the lives of three women from different generations who came from the rural hinterland to work in factories of the industrial north. The novel is dedicated to “all those women who were muzzled by their father, brother, spouse, master, by the church and by history”.

A prodigious book. A festival of language from a time when there were names for everything.
(Xavier Antich)

Roman Simić (1972) holds a degree in Spanish Language and Literature and Comparative Literature from the University of Zagreb. He served as the editor of Quorum, one of Croatia’s leading literary magazines, and, for the past 15 years, is the director of the Festival of the European Short Story. He has published three award-winning collections of short stories in Croatian, and 2015 saw a selection of his stories published in English translation under the title A Frame for the Family Lion. His books were translated into German, English, Spanish, Slovenian, Polish, and Macedonian, and his texts were included in various anthologies. Roman Simić lives in Zagreb and works as an editor at Fraktura Publishing.

Inga Žolude (1984) is a prose writer, essayist and literary critic. She is the author of three novels: Warm Earth (2008), Red Children (2012) and Santa Biblia (2013); and two collections of short stories, Solace for Adam’s Tree (2010) and Stories (2015). She is currently working on the sequel to her first novel Warm Earth, which has become a cult book in her native Latvia. She holds a PhD in comparative literature and, having spent a year in the US on a Fulbright scholarship, she teaches creative writing at the University of Latvia. She has won various literary awards including the European Union Prize for Literature 2011 for the collection of short stories Solace for Adam’s Tree. Individual stories and excerpts of her novels have been translated and published in anthologies in English, including the Best European Literature 2014 from Dalkey Archive Press, French, German, Swedish, Hungarian, Polish, Lithuanian, Slovenian and Czech. She is currently curator of writers’ mobility programme at the Writers’ Union of Latvia.

Literary Europe in India is organised in association with:

It is organized with support from: