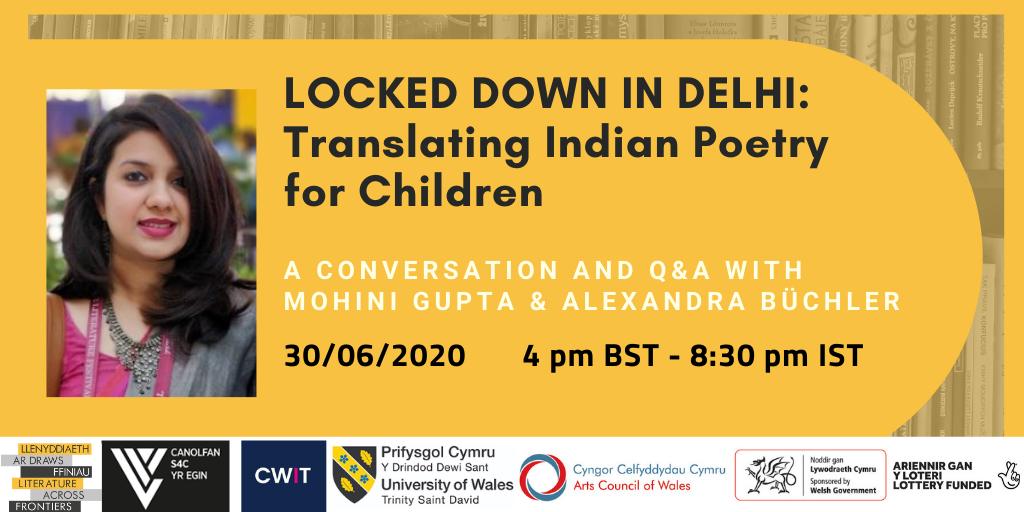 Watch the second conversation in the Locked Down series, a series of conversations between LAF Director Alexandra Büchler and former Charles Wallace India Trust Fellows.

The second conversation in our series was a conversation and Q&A with Mohini Gupta that streamed on Tuesday, 30th of June in collaboration with Canolfan S4C Yr Egin.

Mohini Gupta is a writer, translator and literary event organiser and was our Charles Wallace India Fellow in 2017. She has written for various publications such as The Huffington Post, The Caravan Magazine, The Wire.in, Scroll.in and her English-Hindi translations have been published by Tulika Publishers and in a number of journals. She moderates sessions with Indian writers at the Jaipur Literature Festival and is a contributor to the World KidLit website. During her 2017 CWIT residency in Aberystwyth, Mohini worked on her planned projects – translating Vikram Seth’s Beastly Tales from Here and There (1991), wrote her own poems for children in Hindi, and launched the intiative Mother Tongue Twisters, a platform dedicated to Indian-language children’s poetry which also hosts talks with literary translators. Professor Elin Haf Gruffydd Jones from the University of Wales Trinity Saint David, where the Charles Wallace India Trust Fellowship is now based, also joined the conversation and moderated the Q&A session.

The annual Charles Wallace India Trust Fellow in literary translation and creative writing is hosted by Literature Across Frontiers at the University of Wales Trinity Saint David.

The Charles Wallace India Trust offers opportunities to writers, translators, artists and researchers from India to spend time in the UK working on a project of their choice in a range of disciplines. There are currently three other CWIT fellowships in the field of writing and translation: two in writing, based at the Universities of Stirling and Kent, and one in translation, based at the British Centre for Literary Translation at the University of East Anglia in Norwich.

The Wales fellowship, launched by Literature Across Frontiers in 2016, is unique in combining the creative disciplines of literary translation and writing, and is part of LAF’s decade-long engagement with India creating literary connections between the two countries.