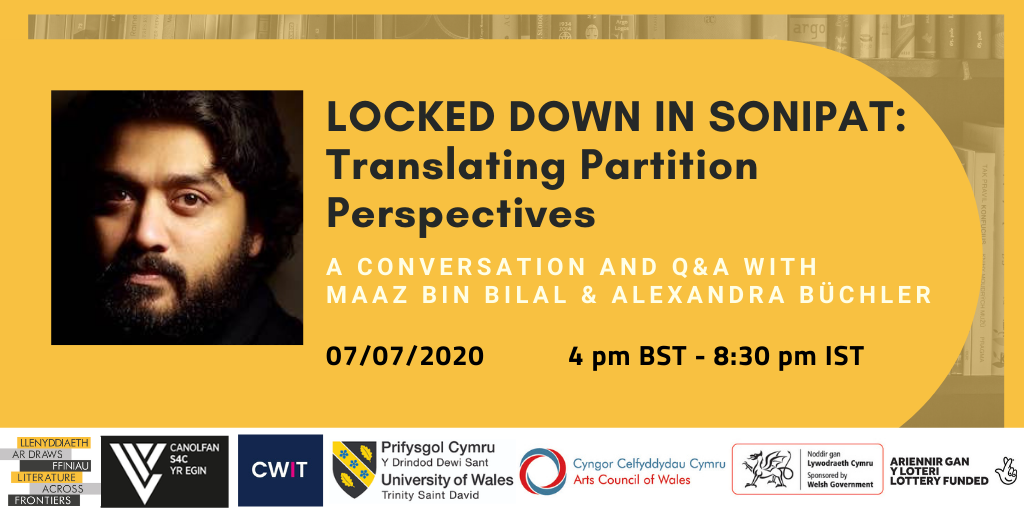 Watch the second conversation in the Locked Down series, a series of conversations between LAF Director Alexandra Büchler and former Charles Wallace India Trust Fellows.

The third conversation was a conversation and Q&A with Dr. Maaz Bin Bilal that streamed on Tuesday 7th July in collaboration with Canolfan S4C Yr Egin. The conversations were recorded during the Covid-19 lockdown and were followed by a live Q&A session.

Writer, translator and scholar Maaz Bin Bilal was our Charles Wallace India Fellow in 2018. His first book of poetry in English included selections of translations from Urdu, Ghazalnama: Poems from Delhi, Belfast, and Urdu, was published in 2019 by Yoda Press, and his translation of Fikr Taunsvi’s book The Sixth River: A Journal from the Partition of India, which he worked on during his CWIT residency, was published in the same year by Speaking Tiger. He is currently working on several projects: including translation from Persian of a long poem on Benares by the 19th century poet Ghalib, for Penguin India, and a collection of inter-connected short stories on family life in Old Delhi where he grew up and where his family still live. Professor Elin Haf Gruffydd Jones from the University of Wales Trinity Saint David, where the Charles Wallace India Trust Fellowship is now based, also joined the conversation and moderated the Q&A session.

The annual Charles Wallace India Trust Fellow in literary translation and creative writing is hosted by Literature Across Frontiers at the University of Wales Trinity Saint David.

The Charles Wallace India Trust offers opportunities to writers, translators, artists and researchers from India to spend time in the UK working on a project of their choice in a range of disciplines. There are currently three other CWIT fellowships in the field of writing and translation: two in writing, based at the Universities of Stirling and Kent, and one in translation, based at the British Centre for Literary Translation at the University of East Anglia in Norwich.

The Wales fellowship, launched by Literature Across Frontiers in 2016, is unique in combining the creative disciplines of literary translation and writing, and is part of LAF’s decade-long engagement with India creating literary connections between the two countries.