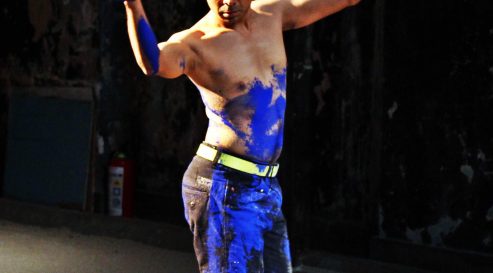 Poetry meets dance in our ongoing programme of creative encounters between the two countries which started almost a decade ago. This summer we continue with a collaborative residency during which the dancer and choreographer Vikram Iyengar with poets Sampurna Chattarji and Eurig Salisbury explore the traditional forms of kathak and cynghanedd. They will share the work in progress in two evenings which will also feature poets who have at different times visited India and collaborated with local poets and artists.

They will be joined at Arad Goch in Aberystwyth by the winner of the Wales Book of the Year 2018 Robert Minhinnick.

Admission £5  Concessions £3  Drinks and snacks served after the performance.

Books by the poets will be on sale.

How does a word begin? How does movement begin? How do they combine into a form that has its roots in tradition yet lends itself to endless innovation?

Poets Eurig Salisbury and Sampurna Chattarji met in a poetry translation workshop in 2010 and have kept in touch ever since. In 2017, together with eight other poets from India and Wales, they took part in a project organized by Literature Across Frontiers to celebrate the 70th anniversary of India’s independence. The project addressed, in a myriad ways, the theme of "independence”. In artistic practice, independence means freedom to think, act and create beyond the confines of convention and economic necessity. But successful independence - of communities and individuals alike - also involves co-dependence, collaboration and understanding across divides and differences. At a time of global change which sees increasing friction between identities, the project helped open up a unique dialogue, formulating new narratives and ideas which both uncover and reinterpret difficult histories.

The joint book of poetry, essays and drawings, Lle Arall Ble Arall / Elswehere Where Else, is the outcome of their on-going creative friendship. While in Calcutta, they came together with the dancer-choreographer Vikram Iyengar to imagine a project inspired by the acoustic and rhythmic structure and content of Eurig Salisbury’s poem Gwers Gynganeddu in its original Welsh and in Sampurna Chattarji’s Bangla translation. During a five-day collaborative residency held in August 2018 in Aberystwyth, the three will explore the sounds, rhythms and cadences that lie at the heart of ancient storytelling traditions expressed through poetry and dance, and share with the general public their work in progress intertwining poetry, sound and movement.

They will be joined by Robert Minhinnick, winner of Wales Book of the Year 2018, Nicky Arscott and Siân Melangell Dafydd, poets who have at different times participated in the creative encounters organised by Literature Across Frontiers and Wales Literature Exchange.