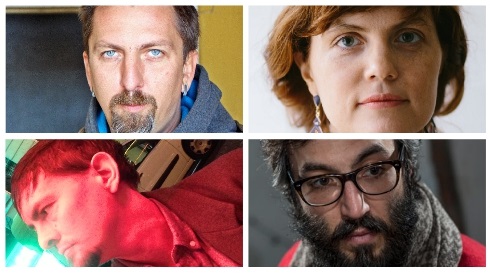 Poetry Connections bring together the leading lights of Latvia’s vibrant poetry scene with contemporaries from Scotland and Wales for a unique ‘poetry jam’ in three languages.The event is part of a larger collaborative project between LAF and Latvian Literature, leading up to the presence of the three Baltic countries as market focus at the London Book Fair 2018.

The event takes place in Birmingham (Mac Birminham) on 1 June at 6:30pm and in Liverpool (The Brink) on 2 June at 6pm.

Valts Ernštreits is a Latvian poet, translator, artist, and researcher at the University of Tartu. He teaches a course in Livonian Language and Culture at the University of Latvia, as well as in other universities in Germany and Finland, and is an author of multiple research publications. His graphic art has been displayed in solo-exhibitions and group shows. He also manages Nice Place concept store and venue in Riga.

Inga Gaile (1976) is a Latvian poet, writer, playwright and theatre director. She is the author of four poetry collections and a collection of children’s poetry. In her poems, she explores the inner states of being, her own experiences, everyday lives of women, as well as stigmatized groups of society. In her stage work and spoken-word performances she focuses on gender and feminist issues, illuminating injustices and promoting equal rights.

Rhys Trimble was born in Zambia in 1977. He is a bilingual poet, text artist, performer, drummer, editor, critic, collaborator, shaman, staff-wielder and shoutyman based in Wales. The author of more than a dozen books, including his latest, Swansea Automatic, he is interested in avant-garde poetry and Welsh metrics. He edits ctrl+alt-del e-zine. He has performed in countries around the world and his work has been translated into Slovak, Polish, Latvian and Turkish.