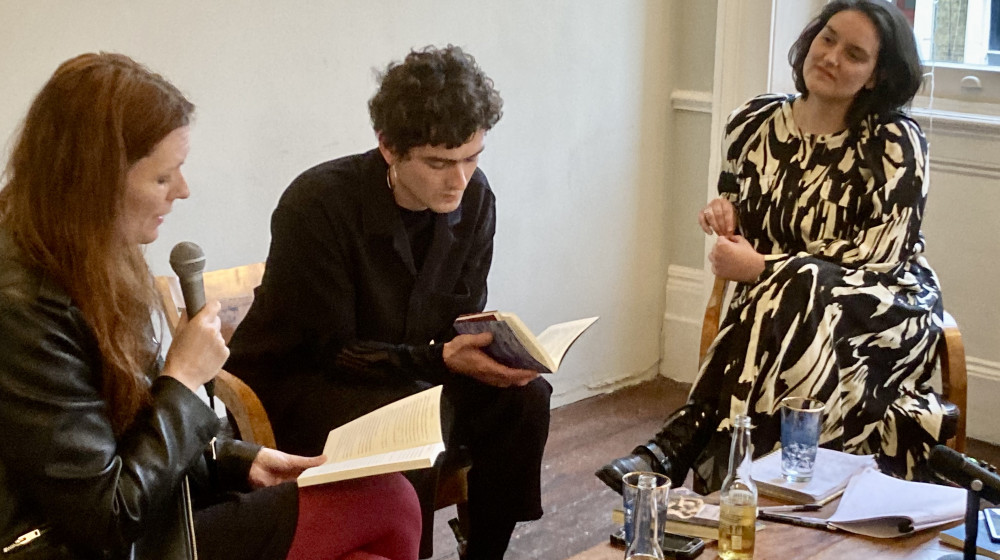 Authors Manon Steffan Ros and Pol Guasch were in conversation with Casi Dylan as part of the Spotlight on Catalan Culture programme at the London Book Fair 2022.

The two authors share a concern about a possible future affected by disaster, writing with an urgency compounded by the fact that the main protagonists of their books are children. The Blue Book of Nebo by Manon Steffan Ros is published in English and several other languages after the original Welsh title Llyfr Glas Nebo won the Wales Book of the Year Award in 2019. A pregnant woman and her young son are among the few survivors in a post-nuclear rural Wales. They have to learn new skills to live and make a future for themselves, but they also feel a deep-seated need to record their past in a found notebook. Napalm al cor (Napalm in the Heart), by the young Catalan author Pol Guasch, winner of the 2021 Anagrama prize, took the Catalan literary scene by storm. Set in an unnamed location, it is an exercise in understanding an extreme and traumatic past through a poetic, intense narrative tracing the journey two boys attempting to flee.

Pol Guasch (Tarragona, 1997) is a poet and member of the cultural production company La Sullivan. He earned an undergraduate degree in Literary Theory and Comparative Literature (University of Barcelona), holds a master’s degree in Construction and Representation of Cultural Identity (UB), and he completed the Independent Studies Program at MACBA. He has been an associate professor of literature and cultural critique at the UB and is currently researching contemporary theory and literature at King’s College London. He has published the poetry collections Tanta gana and La part del foc and has appeared at various national and international poetry festivals, including Barcelona Poesia, the Sant Cugat International Poetry Festival, Poesia i +, the Festival of Hope, and the Poetry Festival Alguén que respira!, among others. Napalm al cor (2021) is his first novel.

Manon Steffan Ros (1983, Rhiwlas) is an award-winning Welsh novelist, playwright, games author, scriptwriter and musician She is the author of over twenty children’s books and three novels for adults, all in Welsh. Her award-winning novel Blasu has been translated (by the author) into English, under the title of The Seasoning. In May 2021 she was described as “arguably the most successful novelist writing in Welsh at the moment”. Her second novel Blasu won the Fiction Prize of the 2013 Wales Book of the Year and came out in the author’s English translation as The Seasoning in 2015. Her novel Llyfr Glas Nebo was published as The Blue Book of Nebo in 2021 by Deep Vellum and 2022 by Firefly Press, and has so far sold translation rights into some ten languages.  It won the triple crown of prizes at the 2019 Wales Book of the Year Awards. The novel was adapted into a stage play toured theatres across Wales in early 2020. Her latest novel for adults, Llechi (2021) is a raw, emotional story following a group of friends of a murdered young girl as the reader discovers what led to her death. Manon discuss and read from her novel, Llyfr Glas Nebo, here.

Casi Dylan is a cultural producer and commentator, and an Associate at Wales Literature Exchange. She has worked at the intersection of arts, education, and public engagement for over a decade, including roles at the Edinburgh International Book Festival and The Reader Organisation. Originally from Cwmystwyth, west Wales, she is now based in Scotland coordinating cultural activities at the University of Glasgow. A regular contributor to the Welsh-language cultural magazine O’r Pedwar Gwynt, her writing has been featured in Words Without Borders and The Reader magazine.

The event was organised as part of the Spotlight on Catalan Culture programme at the London Book Fair 2022 in cooperation with Institut Ramon Llull and with support from Arts Council Wales.