Sulaiman Addonia and Mazen Maarouf are two authors whose writing contributes to a growing body of European literature that straddles multiple cultures and languages, and bears witness to the traumas of war and displacement — physical, emotional and linguistic. Addonia, an Ethiopian / Erithrean who came to Britain as a child refugee, has written two novels in his adopted English, while Maarouf is a Palestinian who grew up in Lebanon and continues writing in Arabic, having found a new home in Iceland. They discuss the sources of their writing and their attitudes to language with Alexandra Büchler.

You can watch the recorded debate here. 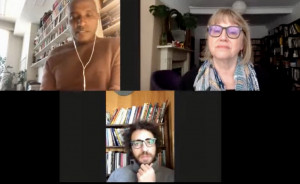 The debate Language of Silence: New Voices for Europe was organised in collaboration with the Croatian Writers Association as part of the project Literary Europe Live Plus supported by the Creative Europe Programme of the European Union.