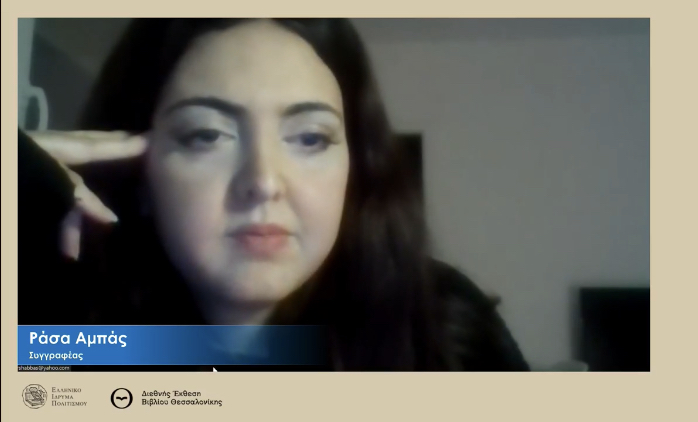 The war in Syria has caused a humanitarian crisis, forcing large numbers of people into exile, including writers and artists, many of whom settled in Germany where they became part of the Middle Eastern artistic diaspora. Two women prose writers, Rasha Abbas and Rabab Haidar discusse the challenges of finding a new home and a new creative environment in Europe while maintaining contact with their Arabic readers. The debate was  joined by Philippe Leclerq, representative of UNHCR in Greece and moderated by Alexandra Büchler.

The occasion for our cooperation with the Hellenic Cultural Foundation, organisers of the Thessaloniki International Book Fair, was the guest of honour presence of Germany where the two authors now live.

The debate with Greek simultaneous interpreting voice over is available on the book fair’s Facebook page here.

Rasha Abbas is a writer from Syria, based in Berlin. She grew up in Damascus where she studied journalism, and is the editorial director of ‘Hamesh’ the cultural supplement of Aljumhuryia website. She has published three short story collections in Arabic: Adam Hates Television (2008) won the young writer’s award at the 2008 Arab Capital of Culture, The Invention of German Grammar (2016) fictionalises her experiences of settling in Germany and learning the language, and was published in German translation by Sandra Hetzl as Die Erfindung der deutschen Grammatik (Mikrotext, 2016). Her latest, The Gist of It (2019), published in Arabic by the Milan-based press Al-Mutawassit, was translated by Sandra Hetzl as Eine Zusammenfassung von allem, was war (Mikrotext, 2018). English translations of her work have been published in the online magazine Words Without Borders.

Rabab Haidar is a Syrian novelist, journalist and translator from Latakia living in Berlin. She majored in English literature at the University of Damascus. After graduation she lived in the Gulf, Africa and Europe. She came back to Syria before the revolution and started working as a writer and journalist. Her first novel The Land of Pomegranates, tracing the lives of three women from the Alawite minority in Syria, was published 2012, and she has completed two more novels which she has put on hold to reassess in her new situation. She was awarded a Heinrich Böll scholarship in 2018, and has lived in Germany since. She participates in the project Weiter Schreiben (Writing On) which pairs immigrant and German authors to work together and translate each other’s writing. She has been writing  for Die Zeit, and is on the editorial team of Abwab, the Arabic newspaper in Germany.

The event was part of the Literary Europe Live Plus project supported by the Creative Europe Programme of the European Union.