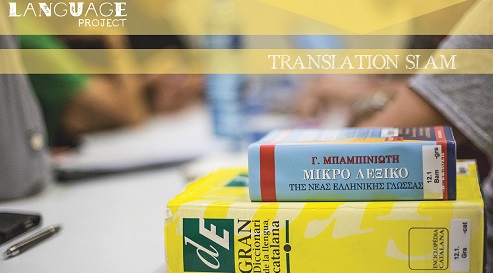 Which team will capture the audience?

Last May, the welcoming Escola Oficial d´Idiomes Barcelona-Drassanes hosted a Cooperative Translation Workshop. Two teams, led by the translators Montserrat Franquesa and Joaquim Gestí Bautista, translated the Greek crime novel The Late-Night News by Petros Markaris, to Catalan, under the moderation of Κleri Skandami, Professor of the Greek Department of the School, and in collaboration with the cultural initiative The Language Project and Literature Across Frontiers. The two groups worked separately, preparing two different translations.

On Saturday, 30th of September, on the International Translation Day, we are all invited by Quim, Montserrat, Kleri and the members of the two teams to attend a Translation Slam at the CCCB in Barcelona.

This event is a unique opportunity for two rich languages to meet, giving to the audience the chance to participate, express their opinion and reward the participants for their effort. Knowledge of Greek is not a prerequisite in order to attend, since the event will be held in Spanish and Catalan.

Joaquim Gestí Bautista is a graduate of Classical Philology and a Doctoral degree holder in Translation from the Autonomous University of Barcelona. He combines teaching and literary translation. He has translated several writers from Greek to Catalan as well as the most important works of Dino Buzzatti and Luigi Pirandello from Italian to Catalan. He has participated in the collection of Greek and Latin writers of the Fundació Bernat Metge, where he has covered the version of the history of Herodotus. He is co-author together with Montserrat Franquesa of the Catalan version of the Diccionari de mitologia grega i romana de Pierre Grimal (2008) a reference book for students and aficionados of the classic era. He is a co-editor of Visat, the journal of Literary Translation of PEN Catalá.

Montserrat Franquesa is a graduate of Classical Philology and German Philology and holder of a doctoral degree in Translation. She has been working as a professor and translator from German, French and Modern Greek. She is co-author together with Joaquim Gestí of the Catalan version of the Diccionari de mitologia grega i romana de Pierre Grimal. She is a researcher of the Study Group on Contemporary Catalan Translation (GETCC) of the Autonomous University of Barcelona, co-editor of Visat, the journal of Literary Translation of PEN Catalá.