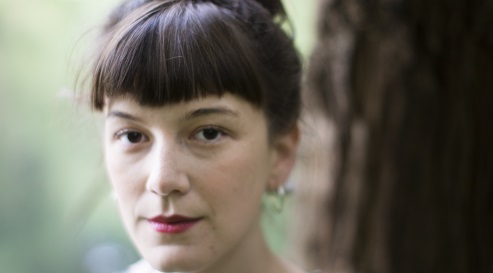 Weltklang – Night of Poetry is a panorama of contemporary poetry, with poets from all parts of the world reading, performing and singing in their native languages. An anthology of German versions of the texts has been published exclusively for this evening.

This year’s Weltklang opens with a performance on origins, homeland and identity by Charlotte Van den Broeck, the Belgian poet and one of Literary Europe Live’s New Voices from Europe, and the Dutch writer Arnon Grünberg (born 1971 in Amsterdam).

The poems of the Scottish writer John Burnside (born 1955 in Dunfermline) capture in a unique way the “other lives of things”. These powerful texts are dedicated to the “great spectacle of the real”, follow the flight of spotted owls, and describe the metallic smoke-grey of the sky and the membranes of stranded jellyfish.

Yasuki Fukushima (born 1943 in Tokyo) is one of the most expressive of contemporary Japanese poets. He performs his zekkyōtanka (shouted tankas) with music, loud and penetrating, placing his verse in dialogue with the texts of other writers and breaking down the border between what is mine and not-mine. Fukushima’s performances are like jazz: none of his performances is like any other.

Body and poem are concentrated together in the poetry of Slovakian poet Mila Haugová (born 1942 in Budapest). Her poetry is full of allusions, with nature, love, memory and loss inseparably interwoven in poems that are fragile and powerful at the same time, like “semi- / permeable membranes”.

The poems of Dagmara Kraus (born 1981 in Wrocław, Poland) are a “joyful jumble of words combining language fetishes, highly-charged words and elements borrowed from far-flung archives of terms and names” (Michael Lentz). This evening, Kraus will be drawing on the rich stock of ancient mourning culture and modern planned languages.

James Noël (born 1978 in Hinche, Haiti) is one of Haiti’s major contemporary writers. For him, poetic arousal is the highest form of commitment. His poetry is full of stunning images – the sun has a hellish heart, the sky is a painted shell, the sea the best of all films. Noël’s poetry enacts the “migration of walls“, movements of escape, of flight between ruins and border walls.

M. NourbeSe Philip (born 1947 in Moriah, Trinidad and Tobago) is reading from Zong! (Wesleyan University Press 2008), a prominent work of conceptual poetry. It takes a legal report from the 18th Century on the deaths of 150 Africans on a slave ship and distorts it until that the historical text dissolves into a cacophony of voices.

Sergio Raimondi (born 1968 in Bahía Blanca, Argentina) is the poet of the globalised world per se and its radical critic. Raimondi is able to break down the fundamental questions of political economy to a slice of bread in just a few lines. His poetry is like a “muscle that can abstract“.

Charlotte Van den Broeck’s poetic roots are in Spoken Word. She is a superb performer. Her two volumes of verse have made her a shooting star at home. With “reluctant ease, as though everything were just a marble run“, Van den Broeck narrates familiar domestic scenes, talks about things that fall off the edge and afternoons in relief lettering.

Jan Wagner (born 1971 in Hamburg) combines the highest mastery of form with surprising poetic phrasing, without ever being traditionalistic. In 2015 he was the first poet ever to win the Prize of the Leipzig Book Fair. In his poems the simple radish, midges with the bodies of sphinxes and a biker in the vastness of Montana all make an appearance.