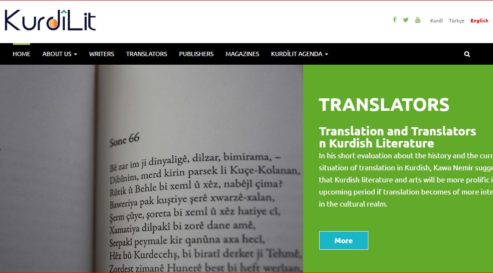 A project set up jointly by the Diyarbakır Arts Center, Lîs Editions and Literature Across Frontiers, the website KurdîLit: Network for Kurdish Literature and Publishing in Turkey went live on the 17th of August 2016.

The website classifies and organizes the content under four primary headings: Writers, Translators, Publishers, and Journals. The website also includes 2016 Kurdish Literature Report based on interviews with literary producers working in this field, as well as an additional agenda section where events and other news will be published.

The preliminary preparations for the website started in February 2016 with networking meetings held in the cities of Diyarbakır, Istanbul, Van, Batman, and Mardin. In these meetings and afterwards, the organisers prepared a comprehensive list of institutions and people who are currently producing in Kurdish – both Kurmanjî and Kurmanjkî – and contacted various institutions and individuals, providing information about the project to 120 writers and translators, 22 publishing houses, and 14 representatives and editors of journals and magazines.

Organisers compiled and organised information submitted by writers, translators, publishers, and journals in three languages as a start. The website includes data from approximately 60 literary producers in Turkey, and the aim is to enrich the website with more profiles of those institutions and individuals who want to be part of this platform.

The first launch meeting for KurdîLit was held in Diyarbakır Sümerpark Reception Hall on Wednesday, 29 June 2016. The meeting was attended by writers, publishers and literature lovers from Diyarbakir and nearby cities. Following the meeting, the audience was presented with copies of the project’s final report, which contains the views and observations from different writers involved in the project, and was compiled over the course of various meetings and interviews with Kurdish literary creators.

The website was presented to the international community on the 26th August 2016 Friday at 7pm in the scope of Malta Mediterranean Literature Festival.

There will be a meeting with Turkish and Kurdish literary actors as well as other culture and art organizations in Istanbul on the 30th September 2016, in Cezayir Meeting Room. The meeting aims to present the website to the Turkish publishing scene as well as developing relationship between Turkish and Kurdish literary actors. Kurdish Writer’s Association, Turkish Writers’ Union, Turkish PEN, and Turkish Publishers Association will be represented and will give a speech during meeting.

Organisers intend to continue increasing the visibility of Kurdish literature with more presentations and meetings at different events in Turkey and Europe.

The project was made possible by: