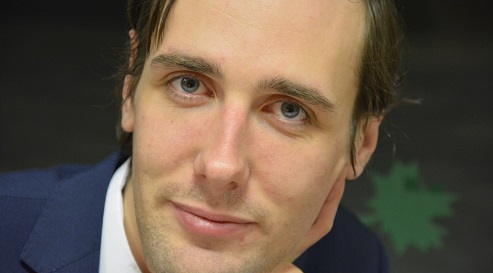 Arvis Viguls (1987) is a Latvian poet, literary critic and translator from English, Spanish, Russian and Serbo-Croatian. His first poetry collection Istaba (A Room, 2009) received the Latvian Writers’ Union Prize for Best Debut Collection and the Poetry Days Award for Book of the Year. His second collection 5:00 (2012) was shortlisted for Best Poetry Collection of the Year and received the Anna Dagda Foundation Award. His poems have been published in anthologies and literary magazines in English, German and Russian. He has worked as the host of the literature programme at NABA radio. He lives and works in Riga, and is currently working on his third book. He has translated the works of Joseph Brodsky, Federico Garcia Lorca, Walt Whitman and W. B. Yeats, among others.

Arvis Viguls was selected as one of Literary Europe Live‘s New Voices from Europe 2017.