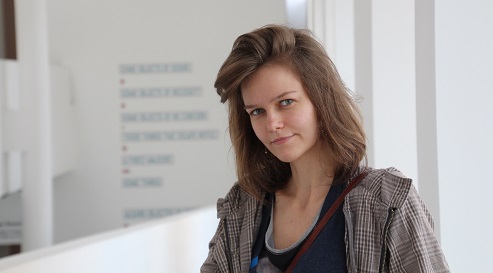 Inga Pizāne (born 1986 in Krāslava) is a Latvian poet. Pizāne studied pedagogy in Latvia and Sweden, simultaneously attending lectures at the Literary Academy. Pizāne’s début was a publication on the Satori website and summer periodical (2012). Her later works appeared in other outlets, including the anthology of Latvian poetry One Poem (Viens dzejolis, 2013) and the poetry photo book Latgale’s Heartbeats (Latgales sirdspuksti).

She also wrote lyrics for songs by Framest, Lady’s Sweet and other musicians and bands. Pizāne performed at the Poetry Days events and The Blood of a Poet festival. Her first collection of poems titled You are no Snow (Tu neesi sniegs) was published in 2016 by the publisher Jānis Roze. Poet Jānis Rokpelnis characterised Inga Pizāne’s poetry as psychologically delicate, saturated with paradoxes, and professionally crafted. Pizāne’s works have been translated into English and Russian. Currently she is working on her second book of poems.