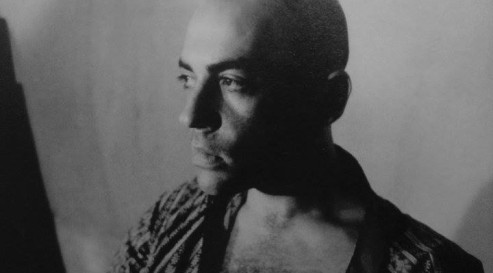 Irakli Charkviani (1961 – 2006), sometimes known under his pseudonym Mefe (‘The King’), was a Georgian poet, prose writer, and musician. Charkviani was known for his eccentric image and poetry, and for eclectic music, which spanned alternative rock, electronic music and hip hop.

Charkviani was born into an élite family in Tbilisi, the capital of then-Soviet Georgia. His father, the journalist and diplomat Gela Charkviani was Georgia’s former ambassador to the United Kingdom, and grandfather Candide Charkviani was the first secretary of the Central Committee of the Georgian SSR Communist Party from 1938 to 1952. His greatgrandfather was a prominent Georgian artist Mose Toidze. Charkviani graduated from the Department of Western European and American Literature, Tbilisi State University.

His debut in 1976, with the indie rock project Arishi, passed unnoticed, but the later band Taxi had a greater success and recorded a homonymous album in 1988. In the 1980s, several of Charkviani’s lyrics and short stories, noted for their rebellious character, were published in Georgian literary press. Early in the 1990s, Charkviani emerged as one of the leading artists on Georgia’s alternative and electronic scene. Leading the projects Children’s Medicine (1991-1992), and Georgian Dance Empire (1993), he performed throughout Georgia as well as abroad, particularly in Moscow and Eastern Europe. Charkviani’s debut solo-album Svan Song was recorded in Germany in 1993 and proved to be a significant influence on the Georgian alternative music of the 1990s. He composed music for the feature film ‘Orpheus’s Death’ in 1995 and went on to record his second album Ap’ren in 1997, followed by the single Sakartvelo in 1999 and the albums Amo and Savse in 2001 and 2004, respectively.

Around the same period, he chose the pseudonym of Mefe, meaning in Georgian ‘the king’. Charkviani also authored several poems, stories and a novel, but his music remained the principal source of his popularity. Charkviani was found dead, reportedly of ‘heart problems’, at his apartment in Tbilisi on February 24, 2006, leaving several unpublished songs which were subsequently released as the album Dzirs Mefe (‘Down with the King’) in 2007.

In May 2013 Irakli Charkviani was posthumously awarded Georgia’s most prestigious Rustaveli Prize for ‘his significant contribution to the development of contemporary Georgian culture’. Charkviani’s poems are being translated at the LAF Translation Workshop in Tbilisi in September 2014.