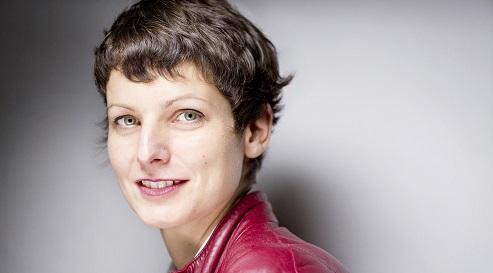 Sophie Divry (1979) is one of the outstanding novelists of the latest crop of French narrative writers. She has worked as a journalist for publications such as La Décroissance and Le Monde Diplomatique, and since 2016 has contributed to a radio programme on France Culture. An activist for feminist movements, Divry is an acute observer of our ever-shifting society. Her four novels explore a range of societal issues: loneliness in La Cote 400 (2013), which has been translated into English by Sîan Reynolds as The Library of Unrequited Love (MacLehose Press, 2014); religious beliefs in Journal d’un recommencement (Diary of a Renewal, 2013); everyday dissatisfaction in La condition pavillonnaire (The Suburban Condition, 2014) forthcoming in a translation by Alison Anderson as Madame Bovary of the Suburbs (MacLehose Press, 2017); and the discontent of an educated and disaffected French youth in Quand le diable sortit de la salle de bain (When the Devil Left the Bathroom, 2014). She won the Prix Wepler 2014 (Mention Spéciale) for La condition pavillonnaire and the Prix Trop Virilo 2015 for Quand le diable sortit de la salle de bain. In addition to English, her works have been translated into Spanish, Catalan, German, Swedish and Italian. Her latest work is a literary essay entitled Rouvrir le roman (Reopening the Novel, 2017).

Sophie Divry was selected as one of Literary Europe Live‘s New Voices from Europe 2017.