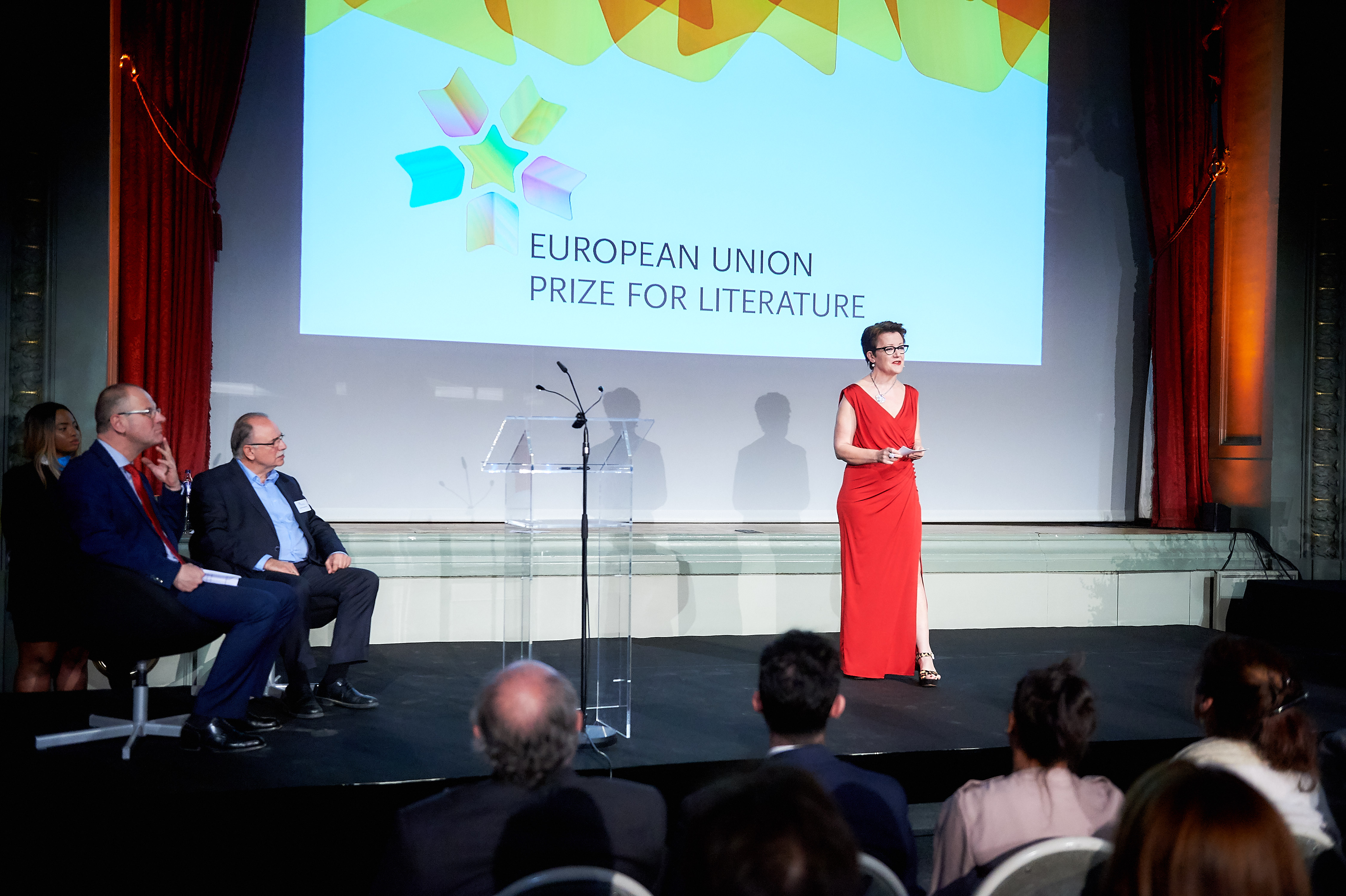 The article by UK journalist and cultural commentator Bidisha introduces a series of short interviews with winners of the European Union Prize for Literature 2017, starting with the Turkish winner Sine Ergün.

This spring, at a ceremony in Brussels compered by the British broadcaster and journalist Rosie Goldsmith, twelve international writers were lauded for their boundary-breaking writing and awarded the European Union Prize for Literature. They were Rudi Erebara from Albania, Ina Vultchanova from Bulgaria, Bianca Bellová from the Czech Republic, Kallia Papadaki from Greece, Halldóra K. Thoroddsen from Iceland, Osvalds Zebris from Latvia, Walid Nabhan from Malta, Aleksandar Bečanović from Montenegro, Jamal Ouariachi of the Netherlands, Darko Tuševljaković from Serbia, Sine Ergün from Turkey and the British author Sunjeev Sahota.

The European Union Prize for Literature rewards the most exciting emerging contemporary prose writing across the continent and this year’s selection of winners was possibly its strongest yet in terms of artistic and demographic diversity. Hailing from a dozen different countries and many more different strands of linguistic, cultural and political heritage, the winners represented the positivity, expansion and creativity inherent in the mixing of traditions and origins, both literary and personal.

However, the prize itself has – unfairly – suffered from a peculiarly muted status compared to prestigious awards like the Man Booker International Prize in the UK, the Prix Femina étranger in France or other, long established international literary prizes. This is despite its wide cast of European shareholders and the fact that it is distinctly part of a multi-country, multilingual programme to support the arts – something that, in our time of division, nationalism and scepticism about the value of a multicultural outlook should be promoted more than ever.

The annual prize was set up in 2009 and is part of a portfolio of prizes awarded by the European Union through its Creative Europe programme – other targeted prizes focus on, for example, architecture – which seek to support innovation in the arts, enable cross-national co-operation, encourage competitiveness at industry level and encourage creativity. It is solidly institutional, inviting and judging nominations through a set of national juries of publishers, critics and writers. Because the prize aims for breadth and fairness across the continent, its organisation is somewhat complicated: the prize has a three-year cycle which rotates each year so that one third of the eligible European countries are considered, and each awarded writer is selected at national level. The writers should have published between 2 and 4 books to be considered ‘emerging’ at a European level, though they are not necessarily young. Generally they will be acclaimed within their own country, but not very well known beyond it. The prize rewards one particular book by the author, which must have been published in the previous 18 months and still available. Importantly, the candidates should be citizens of the countries in the running that year which have to be eligible for participation in the Creative Europe programme. However, some countries previously eligible, such as Turkey which withdrew form the programme, and, let’s face it, also the UK, may not participate in the future in these politically turbulent times. Both were included in this round as a sad reminder of how “democracy’ may sometimes stand in the way of true international cultural cooperation.

Of course, every prize has its criteria, its intricacies and its logistical problems. The greater the ambition and better the intentions, the more holes a critic can pick. For example, this year’s selection is beautifully diverse in terms of the writers’ interests, professional histories and the types of writing they practice, as well as in terms of gender diversity. But it is still all white apart from Sunjeev Sahota from the UK, and while a great range of languages is covered, in each nation majority languages (such as English or Spanish) will tend to be favoured over minority ones (like Basque, Catalan or Welsh) by the national juries. At the level of presentation, too, the prize bears the stamp of ‘officialdom’ which may stand in the way of a wider industry recognition: the prize ceremony is always presented in Brussels and, with an event audience primarily composed of officials and diplomats it feels somewhat removed from the spontaneity, excitement and gossip of the literary sector itself. There is also, of course, the much wider question of whether there is such a tradition as ‘European writing’ and whether this both glosses over the dozens of languages, histories and lands within the continent, and at the same time reinforces notions of ‘European sophistication’ and of the EU as a white, Western bloc distinct from, uninterested in and superior to other regions and their cultural output.

Nonetheless, in my view the EUPL is an extremely valuable enterprise: a culturally and politically powerful statement which champions artistic exploration, is decidedly serious, international and multi-lingual (if not particularly multi-racial or multi-coloured) in its selections, and goes out of its way to work across national borders. The prize encourages translation of the authors’ work and generates author appearances at major festivals and book fairs throughout the region: a form of cultural diplomacy which at once helps the author, forges multi-country links between the publishing industries of different nations and endorses the importance of serious writing and reading in an era of digital revolution. As well as a monetary reward for each writer, the prize enables the ‘migration’ of each writer’s work through translation deals which they otherwise wouldn’t get. This is a huge issue, particularly in the UK where the proportion of literature published in translation hovers around 3-4%, a manifestation of our peculiar cultural insularity, which can only increase as a result of the direction taken as a result of the EU membership referendum vote.

Stories, ideas and experiences have always travelled, and once again such migrations are the globalised world’s norm. Therefore it is representative, not exceptional, that several of this year’s EUPL winners have a migratory background. Maltese author Walid Nabhan was born in Jordan into a Palestinian family who had fled their home village after the establishment of the state of Israel. He came to Malta in his late twenties to study science and technology. Jamal Ouariachi is half Dutch, half Moroccan, while Sunjeev Sahota is a Briton whose parents are Indian.

Of course, racial heritage is not the same as cultural heritage, and neither are definitive; if you go back far enough in any individual’s history, you will find a ‘migratory story’. All the twelve books awarded this year are expansive and outward-facing, but only a few – such as Sunjeev Sahota’s Year of the Runaways, about Indian economic migrants trying to survive in the UK, and Walid Nabhan’s novel L-Eżodu taċ-Ċikonji (Exodus of Storks) about a Palestinian family exiled in Jordan – take on forced movement and migration as their dominant theme. Most interesting to me are the writers’ intellectual migrations: all the EUPL 2017 winners cross disciplinary borders within literature, working equally in fiction and non-fiction, journalism and books, poetry and prose, long form and short form, editing as well as writing. Many, too, cross artistic borders: Aleksandar Bečanović and Kallia Papadaki are screenwriters in the film industry, Halldóra K. Thoroddsen has been a programme director in radio and Sine Ergün is an art curator. As well as being beneficiaries of a linguistically diverse prize, many of this year’s selection are also working actively to help other authors’ stories and ideas migrate, not only from form to form but also more traditionally through languages: Bianca Bellová, Rudi Erebara and Ina Vultchanova are all themselves translators as well as writers.

Taken together, this year’s European Union Prize for Literature reveals a pan-continental literary scene that is full of expression, inspiration and ideas. It seems clear that some changes still need to happen – for example I would like to see greater racial diversity and a wider range of ages in the selection, as well as more exploration of splintered, interconnected and hybrid forms of prose, such as interlinked short stories. While most of the selected books were realist novels, I was particularly intrigued this year by Sine Ergün’s book Baştankara (Chickadee) which contains 23 stories in just 80 pages and Bianca Bellová’s mythic, timeless-seeming fable Jezero (The Lake) about a young boy growing up in a fishing village in decline.

I am writing at a time when the values and spirit of the European Union Prize for Literature – and the overall Creative Europe programme – should be promoted more fiercely than ever before. The EUPL doesn’t just offer a vital opportunity for career expansion for each year’s twelve selected authors or a chance for readers to discover a new voice in translation. It also stands up for the importance of a global artistic community maintained by lots of different international bodies working in co-operation, in which many languages, many routes to creativity, many voices, many forms and many ideas are equally welcome and celebrated.

Bidisha is a writer, journalist and broadcaster based in London.