A woman gave birth not to a baby but to a beautiful little tree. Inside the tree was a smaller tree and inside of it another tree with arms and legs and a heart, though she didn’t know this for sure (and perhaps only dreamed it), and felt ashamed of the fruit of her womb and planted it in the heart of a forest. After many moons of longing she returned and hanged herself from one of his branches.

And in those days the king ordered all his painters to paint the most beautiful map of the kingdom. He implied that he would grant complete artistic freedom: If the map of the neighboring kingdom from the east disturbed the composition, he said, have your way with its borders. The art critics of the neighboring kingdom were quick to report on this plot to their king. In response, he also ordered his painters to paint a map of his kingdom. When the first king learned that the king of the east was imitating him, he gathered some of his abstract painters and secretly ordered them to draw another map, this time of the neighboring kingdom. But even this secret leaked. Abstraction was common in the other kingdom as well. Legend says that many years later, in one abandoned museum not far from the border, the roof collapsed. And we could see the sky.

The grandmother falls asleep and I wander through the other rooms. It seems to me that most of the patients here know that time is only a transitional object. Ahmed, a nurse from the Tel Hashomer geriatric ward, already knows that I write. He tells me about a childless woman of eighty-six who, before the surgery from which she will not awaken, held his hand and said, “Father, I’m a little scared.” Ahmed also says that he lives in Shuafat and has never once been out of the country. They all tell him that he must travel to Berlin, but he doesn’t know German or English. Then he changes the diaper of an old man who has been in a coma for more than a month. “Where have you been?” asks Ahmed. He laughs, “I looked for you all day.” I laugh too; for a moment the old man also seems to be laughing. 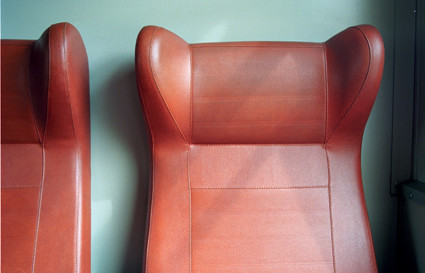