The official identity which the state tries to formulate and extend to all social strata is different from, if not totally opposed to, the popular identity adopted by Egyptians.  This is because the foundations from which one identity or another is formed are highly contrasting.  For while we can say that the official identity results from an awareness based on the written word in all its manifestations, the popular identity adopted by the majority of Egyptians is the result of oral awareness, which has travelled with them across different ages, formulating concepts and perceptions of the world around them, and strengthening their self-awareness.  This awareness has been reflected in habits, traditions, behaviour, architecture, attire and other facets of life.

With the collapse of the Pharaonic state, Egyptian people closed in on themselves, isolated from the state systems which had previously been an integral part of their existence in order to preserve their identity and awareness in the face of an alien and authoritarian external identity.  This continued throughout the Ptolemaic, Persian, and Roman eras until the Arabs entered Egypt.  This retroversion and isolation however was not total, and some interaction occurred with the new incoming cultures, especially with the coming of Christianity, and later of Islam, to Egypt.

While announcing, under occupation, their adoption of new religions, with all their apparent contradictions to the nature of the old beliefs, Egyptians still maintained belief in their basic values. They were able to devise ways to allow the passing on of their concepts and visions of the universe, the world and their self-awareness.  Let us look at a small example: each province had a local god who was celebrated and given offerings each year, this ritual was directed to the saints during the Christian period, and towards religious patriarchs and guardians with the spread of Islam in Egypt.

However, with the formation of the new Egyptian state in the reign of Mohamed Aly and the establishment of statehood, the building of a modern/Western educational system stemmed out of the same awareness the West had turned to since the 16th century with the invention of printing – an awareness based on the written word. This educational system led to the building of an official identity adopted by the ruling state, and the newly formed middle class, following the directives of the authorities which were made up of all the workers in the new sectors established by the state in its transition towards becoming modern.  On the other hand, the popular identity became more isolated once again, something which has continued until today.  We clearly see manifestations of this isolation in recent times in all of the sharp discourse and divisions.

Usually the literary man belongs to the middle class. This is not to say that there are no poets or artists in the popular classes; they constantly exist and are active inside their class, and are seen by the official groups and middle class as the producers of folklore, less ‘valuable’ than official written culture such as novels, poetry, music and arts.  According to the official/written awareness, these arts are more refined and closer to perfection than the more ‘primitive’ arts produced by popular culture.

Here the dilemma faced by the literary man becomes clear. He is placed between the general culture adopted by popular groups (representing approximately 80% of Egyptians) and between the culture he was raised on through education and written/Western values specifically. This is especially true when we consider his utilisation of the arts (theatre, novels, cinema and art) – a result of this historic transformation.  This creates a conflict inside the literary man between sincerely representing the first group with its values and perceptions, or adopting the values of the middle class, which owns the medium where his art is expressed, in order to gain official recognition and appreciation.  In this context we can look at the position regarding colloquial poetry, and how the official institution views it, and the number of colloquial poets present on the poetry committees.

On the other hand, the poet who attempts to delve into popular culture is seen to present folklore which cannot be counted upon nor considered a ‘literary achievement’ worth paying attention to.

Taha Hussein’s view of the future of culture, which he tied conditionally to progress and renaissance and in which he called for making education as indispensable as air or water, is perhaps a transformation of awareness of all strata of society towards a written/Western awareness. However this remains a deficient view since other countries with ancient civilizations, like Egypt, such as China and Japan, did not, by their own standards, abandon their values or awareness as they headed towards modernity.  This is evident in the impressive creative models of these countries.  Naguib Mahfouz once went out walking in the streets of Old Cairo observing how people lived and looking out for literary and linguistic inspiration. He became perplexed: how should he handle the diglossia? The tension between the classical/standard language and the vernacular is a duplicity symptomatic of the Egyptian character. Study Mahfouz’s Trilogy, and the question will strongly force itself again as to how to get out of this dilemma, which Tawfik El Hakim addressed in “Return of the Soul”.  However, these efforts remain isolated from the general awareness due to poor reception in a society suffering from illiteracy among its majority.  Illiteracy here does not refer to reading and writing, but is more dangerous especially as evident among the educated. I mean here the illiteracy of dialogue and free live discussion, the illiteracy of a mind tied down with copying, and the gridlock and prevalence of ignorance. 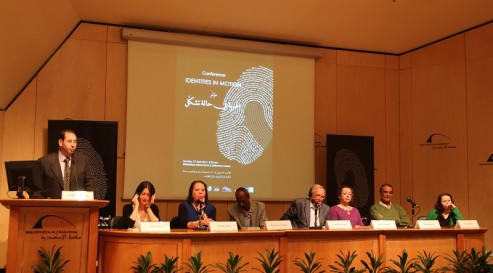