What is my identity? I am not a psychologist, not a sociologist, not a literary scholar. Spontaneously, I’d say: it is the image I have of myself. It is a picture that changes around the margins but at its core remains the same. It is constructed out of fundamental experiences to do with my origins, my childhood, influences from teachers and from literature, to do with my language and also with dialogues with the other and with other cultures.

I must admit that I very rarely think about my identity. I suddenly became aware of it last year, at a poetry festival in the southern Chinese city of Yangzhou. The foreign poets invited to the festival read their poems in their native languages, followed by translations into Chinese. The audience was very large, mainly students and local people interested in literature and culture. I read poems from my “Alexandria” cycle, about the ancient Hellenistic and the new Egyptian city, about Konstantin Kavafis and the loss of cosmopolitanism in the eastern Mediterranean. As I was reading, I suddenly asked myself – the thought came over me almost violently – what was the point here in China of these poems, pieces that are so important to me and so closely linked to my own Mediterranean history, and what could the audience understand of them? I thought the poems couldn’t possibly have any bearing on them because they lacked all references. ‘What on earth am I reading here?’ hammered in my mind. Like never before, I was instantly aware of my European identity, or to be precise: of an identity very alien in this place, an identity that has its seat in the German language and the Mediterranean region. I began to panic. For a moment, I found it difficult to go on reading.

What does this story tell us? Literature never has a global reach; it is always subjective. If it’s good, then it’s radically subjective, in other words close to the author and his identity.

The story also tells us that because we usually navigate within the same spaces, we only become conscious of our identities when external circumstances place them in question.

Let me come to the writing process: it is a highly conscious, active procedure. Writing has a great deal to do with imagination, but also with remembering. We write down what appears important to us, and by doing so we save it from oblivion. In this way, we hold onto the essential aspects (or what we consider essential aspects) through notation, and these essential aspects can be firstly an affirmation of our identity, and secondly can add new elements to our identity, changing it in the process.

Does that mean the writing process can change our identity? I said to begin with that we are often not aware of our identity in repose. Perhaps, however, only someone can say that who, like me, was born in Western Europe after World War II and grew up in a country that experienced next to no crises for six decades, a prospering country with a legal constitution, a country akin to paradise when viewed from many parts of the world.

In crisis regions and extreme situations, a very different writerly identity forms, without doubt. Those writers, for example, who had to leave Nazi Germany and often experienced expulsion, flight, emigration and exile under the most adverse conditions, under threat to life and limb, also had to accept changes to their identities. Most of them traced these changes in their writing. The Austrian writer Stefan Zweig, who emigrated to London in 1934 and in 1939, on the outbreak of war, moved via New York and Argentina to Brazil, took his own life there, in Petropolis. In the months before his suicide he completed the memoir The World of Yesterday, in which he conjured up the old multi-ethnic Austrian empire and with it his ‘old’ identity, which shattered against the new realities. Bertolt Brecht took a very different approach. In his case, the long years of exile in Denmark and the USA led to a change in his identity. He re-enacted this change in many poems and didactic plays, or became more conscious of it through his writing. His clear orientation towards Communism after 1945 must also be seen against the backdrop of his experiences in America.

A second example of changes in the process of identity-construction is the older poets in Eastern Europe, who lived through one dictatorship after another, with this history of violence and futility inscribing itself on their bodies and souls. Their experiences are incommensurable with those of us born after the war. That is why their poems – to take the great Polish poets, for instance, Czesław Miłosz or Wisława Szymborska – have great weight or a depth of responsibility, which Western writers can never really equal. Heiner Müller, the most famous East German playwright, spoke after 1989 of the great height required to create a tragic fall, something he needed for his work but missed in re-unified Germany. In the struggle against censorship and oppression, he evolved a form of language full of artful tricks, and thus he developed an unmistakeable writerly self.

Recent Egyptian history, too, has been characterized by political and religious conflicts. I am very interested in how Egyptian writers see this relation between identity construction and extreme conditions. How do recent developments colour their writing, and thereby their identities?

To conclude, I believe that an individual’s singularity is retained throughout all changes. The impetus for a change in identity does not come through writing itself, but through external events. Writing, in this context, is re-enactment and understanding.

Yet there is an interplay between writing and identity formation. New experiences are called into consciousness during writing and can ‘accrue’ to our identities as new components. Yet those of us who navigate the realm of literature must never forget that the impulse for the writing process lies less in our identities than in the demons that pursue every writer: the demon of fear, the demon of perfection, the demon of desire or the demon of memory. They too need speaking about. 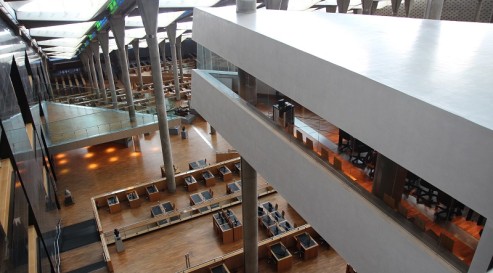