Ask any Armenian to tell you about the literature of his or her country, and nine times out of ten you’ll get the story from its very beginning: the creation of the Armenian alphabet in the 5th century. The Armenian will tell you about Mesrop Mashtots, the man behind the alphabet, and his disciples, the translators who took on the momentous task of making available Armenian translations of sacred texts – and others – some of whose only trace today remains the Armenian version. He or she will certainly cite Grigor Narekatsi, alias Gregory de Narek, theologian, philosophy, and unarguably one of the greatest mystic poets of all literature, considered to be the incarnation of the “Armenian Renaissance” well before the emergence of the European renewal. He or she will also mention Nahapet Koutchat, poet or achough (minstrel) of the sixteenth century, known particularly for his love songs, subtle, refined, but also sensual, erotic, and free of all dogma at a time when the Middle Ages were strongly tainted by obscurantism. And then, in the troubadour tradition, there is Sayat-Nova, who sang of love in the 18th century and composed in Armenian, Georgian, and Turkish.

Moving through the centuries, he or she will also speak to you of Khatchatour Abovian, the “father of modern Armenian literature” and who, in the 19th century, abandoned grabar, or ancient Armenian, in favor of the spoken language. Of course, there is Raffi, the prolific writer of prose, both romantic and revolutionary, who breathed life into ancient Armenian with his historical novels and described oppression under foreign domination as well as the people’s fight for liberation.

Perhaps he or she will also speak to you of the duality of Armenian literature, which uses two literary languages and which owes its development to the course of history: Eastern Armenian, spoken and written today essentially in the Republic of Armenia, and Western Armenian, spoken throughout the Armenian Diaspora. In the beginning of the 20th century there was a boom in both of the Armenian cultural worlds, and a number of important literary figures were born. Both of these cultural worlds were, however, stopped dead in their tracks, their rapidly upward movements brought violently down. One was crushed by the Armenian genocide, the other by the purges of the Soviet regime.

In the West: Krikor Zohrab, Taniel Varoujan, Siamanto, Rouben Sévak and other representatives of this esteemed group of writers and poets arrested and assassinated by the Ottoman government during the mass roundup of Armenian intellectuals on April 24, 1915, the event that marked the beginning of the genocide. There is also Zabel Yessayan, one of the rare well-known female writers, the “master of the psychological novel”, a genocide escapee trapped in the claws of the Soviet regime and disappeared without a trace. There is also Hagod Oshagan, novelist, dramatist, and literary critic who spent a large portion of his life in exile, or Shahan Shahnour (alias Armen Lubin), who found himself in Paris and wrote just as easily in Armenian as in French. Lubin’s work bears the mark of his destiny as an exile.

In the Armenia of the East: Vahan Terian, Hovhannes Toumanian, Avetik Issahakian, Eghiché Tcharents, Aksel Bakunts – names that today represent our classics, and will be cited by any student, even if some suffered more than others under the Soviet regime. Eghiché Tcharents, for example, who championed the revolution at its beginnings, ended up one of its victims. Important literary figures like Gourgen Mahari and Ler Kamsar were victims of the KGB’s repressive policies and were subject to strict censorship. Even today, though, these authors still face forms of ostracism and even censorship.

Closer to us, in the East, there is Hrant Matevossian, Hamo Sahian and Paruyr Sevak, important Soviet writers and poets. During the same period, in the Diaspora, there are the writers Sarafian, Zahrat, and Vahe Oshagan.

However paradoxically, the more you’ll insist on the contemporary period, the less he or she will know what to speak about or which names and trends to mention.

The truth is that it is difficult, even impossible, to briefly present contemporary Armenian literature. The first reason for this is that, like world literature in general in the postmodern era, the Armenian literary scene is characterized by great diversity and cannot be reduced to a single definition, and not even to movements, currents, or schools. The second is that the boundaries of the phenomenon called “Armenian literature” are indefinable. The Diaspora is so large and so complex that many Armenian writers – or writers of Armenian origin – present their work as just as much a product of their adoptive culture as of their Armenian roots. Many write in the languages of their respective countries and are as such difficult to categorize, even in their national fields: Armenian or American, French, Argentinean… and the list goes on. How to define, for example, Ana Arzoumanian, a Spanish-language poet born in Argentina, or David Kherdian, Peter Najarian and Peter Balakian, novelists or poets born in the United States and writing in English but with markedly different styles, the “French” – authors Martin Melkonian, Denis Donikian and Daniel Arsand, who all write in French, or Grigor Beledian, one of the rare Diaspora writers to choose to write in Armenian. And there are so many others. How is it possible to classify William Saroyan’s son Aram, novelist and minimalist poet who penned this poem containing a single word – lighght – as an Armenian poet, or an American poet, or both? More generally speaking, what are the criteria that make it possible to consider a writer as an Armenian writer? His or her origins, themes, or perhaps yet something else?

If we had to name the decisive quailty of contemporary Armenian literature, or at least the literature being written today in Armenia, we might conclude that it has been relatively closed off to the novel, Europe’s most popular current genre, rather tending toward prose, short stories, and poetry. Armenian literature is literature that experiments, tries to find itself. It is literature that looks to free itself of all Soviet censorship and sometimes chooses street talk, even vulgar language, and breaks with classic forms of narration, etc. Armenian literature is rife with names, with writers who straddled two different eras and who made the country’s literary renewal possible (Violet Grigorian, Mariné Petrossian, Vahram Martirossian, Levon Khechoyan, Armen Shekoyan, Vardan Fereshetyan, Gurgen Khanjian, Vahan Ishkhanian, etc.), and younger writers from the independent generation whose impact for the years to come can already be felt now (Hovhannes Teqgyozyan, Arpi Voskanian, Chouchanik Tamrazian, Vahé Boudoumian, Nara Vardanian, Aram Pachyan, Karen Antashian, Armen Ohanian, Hovhannes Ishkhanian, etc.).

In the case of well-known literatures, it is always possible to guide a reader to a particular book, a particular publication. But with Armenian literature, this is almost impossible, since translations remain few and far between. This special issue of Transcript is therefore very important: it brings together, in one place, various texts translated and published here and there, written by authors from Armenia and the Diaspora in Armenian, English, French and Spanish, with new translations by contemporary authors specially commissioned for the issue. Let us hope that these pages will encourage true enthusiasm for the literature of today, and that this enthusiasm will, in turn, provide new zest and zeal for the translation and diffusion of Armenian literature.

With the support of the Ministry of Culture of the Republic of Armenia.

All photos are from Anahit Hayrapetyan (Visit: http://anahithayrapetyan.com). 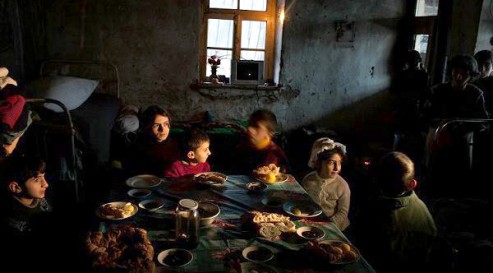 From the photo story "Singles" by Anahit Hayrapetyan