I never dreamed I would be a writer.
There were no books or music or art in our home. Nor was there any talk of such things. In the church and at our picnics we sometimes heard music (Turkish and Armenian), we saw objects of religious art, and we were made to recite the poems of our great Armenian bards. Influences of a kind, perhaps, but not the kind I was looking for or that interested me at the time

My parents were immigrants. We lived in the poor part of town in what was, I suppose, a ghetto. And because the Armenian community was comprised largely of peasants, and the “Americans” who lived there were simple, lower class working people, my own world was rather narrow and confined. From the photo story “Diarbeqir” by Anahit Hayrapetyan

Or was it? I certainly did not believe that it was. I never thought about other ways of life, other possibilities; that is, not until I was ten years old. By that age I was beginning to suspect that my destiny would be different from those around me. I began to question the parents I was born to, the town I was raised in, and the people who might have served as guides or examples.

But I was also lucky. Because there wasn’t any art, and there weren’t any examples of a way of life I wished to emulate, I began to explore the raw material that was there.

From the very beginning I was drawn to nature. Then I began to draw. But it wasn’t until I began fishing (well before the age of ten) that I found the activity and adventure that would occupy me for the rest of my youth. The world of nature, the lore and drama and mystery of fishing, these things saved my life. From the photo story “The closed border” by Anahit Hayrapetyan

What was it saved from? School, where my budding spirit was crushed and very nearly tormented to death. There I, along with others, was treated like a second-class citizen, flunked repeatedly, and told I was too stupid to learn. What did they have to teach that I wanted to learn? Nothing, except art and penmanship, which I taught myself. But I did learn two things: arrogance and disdain.

Again and again I was thrown back on myself to find for myself some measure of beauty and intelligence to which I could relate my growing, undernourished life. That I found what I needed among the rag-bone debris of the city I grew up in, seems amazing to me still.

I found it in the rock gardens beside the homes near the parks and rivers (one garden bridge duplicated in miniature the city bridge it stood beside, and this was my first introduction to art, and to what art could do and mean), in the parades where I once saw my father marching with the VFW, at the Saturday afternoon movies, particularly the serials (The Lone Ranger, Batman, The Green Hornet) and Westerns. And of course the radio programs.

But even more important were the individuals that drew my attention. I studied them with ever increasing awareness, even though I did not understand at the time why they attracted me: Kookoolala, who lived in a hovel and scoured the neighborhood, filling his child’s wagon with junk; Umbashi, who (it was said) made his home in the park—mute, gray and listless—living a secret life I knew would never be revealed; Joe Perch, the famous perch fisherman, whose every movement was the demonstration of grace; United States Tony, for whom life was a stage awaiting an actor such as he. Then there was the ice-cream man, who peddled his wagon from block to block during the summer months; the ice man with his horse-drawn wagon of ice; the junk man to whom we sold paper, tin foil, and scrap iron; the man who came to sharpen our tools (mostly Mother’s scissors) on his bicycle-propelled stone; and the men who seined the rivers for crabs and minnows to sell or use for bait on the pier, and who in the spring waited like me for the cry to ring through the streets, “The perch are running!”

These were the foundation stones of my art.
Then, when I was twenty, I read the stoic by Theodore Dreiser, and I knew: there were levels of existence, levels of reality, levels of being.
Thus I began to write.

I am thankful, therefore, for the poor and backward and ignorant circumstances that surrounded my early life, which was, as it turned out, so rich in substance. It provided the resistance I needed. I had to find for myself the truth and grace and meaning that were right for me. And there, in the midst of the clamor and roar of daily life, I found my silent passage, out of the life I was given and into the life I would make. 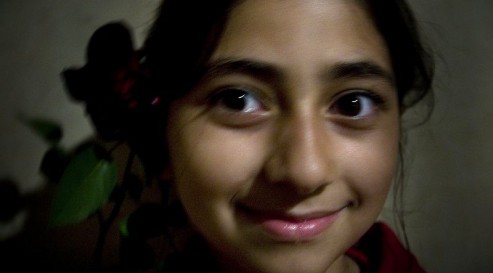 From the photo story "The Closed border" by Anahit Hayrapetyan