An interview with poet Marine Petrossian In this issue of Transcript, the image-rich poetry of Marine Petrossian appears in translation in all three of the journal’s languages: English, French, and German. But in the English version, a special condition prevails: the poet is also the translator. In a short interview, Petrossian speaks to us about what it means to translate her own work into a language she knows well.

There are many reasons why writers begin to translate their own work into another language: migration, exile (voluntary or involuntary), love or appreciation of a language, desire to see one’s work in a different light, lack of a suitable translator, pure experimentation… the list goes on, and the reasons are more than often cumulated. When and why did you, Marine Petrossian, begin to translate your poetry into English?

In 1995, Swiss poet Vahé Godel, on a visit to Yerevan, called me to tell me he had a surprise for me. We met in a cafe and he presented me with “J’apporterai des pierres”, my book of poetry, translated and published in France. Godel, whose father was an Armenologist and mother an ethnic Armenian, knew Armenian well and at the time was translating Armenian poetry to be published in Switzerland and France. Sure, I was happy with the book and so enthusiastic that I decided to learn French so that I could communicate easily with French-speaking people at festivals and other literary gatherings. And then, fluent enough in the language, I started reading my poems translated into French and was shocked! The texts were quite different from the ones I had written. The translator had changed the tone of my poems, making them more “poetic”. This is how it happened that I decided to translate my poems into English myself.

I learned English at school. In Soviet Armenia, besides ordinary schools, there were a few schools for intensive foreign language learning (English, French or German) and our school was one of them.  We started learning English in first grade and we had a very good teacher, Mr. Ganonjian, who had repatriated from Canada, and to whom I owe much for my good English.

I suppose that it’s one thing to take the reins and decide to become one’s own translator, but another to translate one’s own work as faithfully as you’d like another translator, in theory, to do. Joseph Brodsky, who began self-translating his poetry from Russian to English while in exile in the United States, said that translating helped him notice weaknesses in the original… Is it difficult to resist the urge of rewriting, or, at the least, modifying? If we were to compare these English translations with the Armenian originals, would we find two different sets of poems? In other words, is it possible for you as a poet (and critic, as we all are), to reproduce in one language what you have created in another?

I can’t agree with people who say poetry is untranslatable. If that were the case, then we could not read and enjoy poetry, say, of Ancient Egypt deciphered from the hieroglyphs of a dead language. There is something in poetry that is beyond language, but surely it cannot be created without language. When I translate my poems into English I do write them anew, in another language. My poem in Armenian and the same poem in English can never be absolutely the same, but if it’s me who has done the translation then they are both my creations.

Because in my poems I usually use very simple words mostly naming things and actions, it is usually easy to find equivalents for them in English. The difficulty arises in cases when, in the original text, words are put kind of “obliquely”, in a strange way. In Armenian I often do this to refresh words, to play with them, to make them look different from what they were. But when translating into English, it is very difficult to find an equivalent for this, to do it in a way so that English readers do not take it for a mistake, for faulty language. I will give an example. Here are the first five lines of my poem, “Stove”:

and make it mine –

only when the weather is snowy

i turn on the stove

If I translated the fourth line word for word, it would look like this:

only when the weather is snow

This sounds strange, of course. It sounds strange in Armenian also. As I have said, I sometimes put words in this strange way just to play with them. But most of the time I don’t dare to do the same in English. I think if I do so, English reader will take it for a mistake.

With their free verse and crystal-clear paintings of everyday or slightly odd situations, the English translations of your poems call to mind something of the Imagist movement of Ezra Pound and other Anglophone poets working in the early part of the last century. Do you have a conscious attachment to this “group”? Is there something about working with the English language that invites a certain economy of language? When reading your poem “Pears”, for instance, it is tempting to detect a nod to William Carlos Williams and his famous plums, gobbled up in “This is Just to Say”…

While writing and then translating my “Pears”, I was not thinking about William Carlos Williams, though it is quite possible that the reminiscence of his plums was sleeping somewhere in my memory since the days, some 20 years ago, when I first discovered his poetry. Actually, yes, my poetry has some closeness to that of Williams and the Imagists in general. But there are also significant differences. In “This is Just to Say” we see the plums in the context of a realistic human relationship. Whereas in my “Pears” (and also in other poems presented here) the context is surrealistic. It’s a kind of existential surrealism… 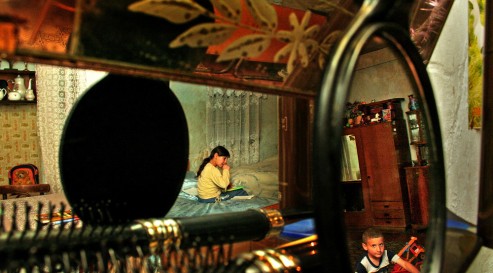 From the photo story "The Ghost House" by Anahit Hayrapetyan