You were born in Lebanon, lived in the United States and studied in England, then moved to France and lived in Marseilles and Paris. When did you start to grow an interest in Armenia and why did you recently decide to settle down there?

It has never been my intent to lead a peripatetic existence. I try to spend a considerable amount of time wherever I am, and so the city and country choices are more thought out and deliberate than they seem. I’m not a big fan of peregrinations. To understand a place, its myths and language, requires time, and it’s a much more enjoyable process when that time is linked to work, whether book work or company work. Everything informs my writing, and new cities have a way of sharpening my senses and reconfiguring my sensibility. You have to learn and adapt and see things differently, and these are some of the reasons why our family decided to settle down here. The interest was always there from the start since Armenian is the first language I learned to speak. It’s part of my primary identity, and then you move away from that and appropriate new cities, along with their myths, and in the process create a more layered, polyglot identity.

What about Armenian literature? Who are your favorite authors and how did you discover their work?

From the contemporaries I like the short stories of Aram Pachyan. They are surreal, brutal and tragic. One is called “Toronto”, a city he has never visited.* For me it defines this pervasive sentiment of migration and leaving that is so central to Armenians, yet this is surprisingly a theme that is little discussed in modern fiction even as Armenia has experienced a massive exodus to more prosperous countries since the collapse of the Soviet Union. I’m not being critical of them. Emigration is the result of legitimate economic and political reasons, and Armenians, unlike their neighbors, the Georgians, have been leaving for centuries. The Armenian diaspora is a testament to this. The Georgian exodus is smaller partly because the Georgians have been more successful at cobbling together a more robust, sinewy economy and transparent power structure in the post-Soviet period. I use the word transparent literally. In Tbilisi, the police station is made of glass and you can see what is happening inside it while driving your car in the city. It’s very different in Yerevan where power relations are more opaque and less centrifugal.

How did I discover Aram’s work? I first met him at a bookstore called “Bureaucrat” and he happened to be working there at the time. I also like the works of Raffi who died in Tbilisi in the late 19th century like many of the great Armenian intellectuals at the time. I discovered his work in high school and it resonates with me in a powerful way. One of his novels, Khente (The Madman) is about a spy who pretends to be the village idiot. It must have somehow informed my first novel, The Cyclist, this idea of being observed and observing others in secret. There are many others like Gurjieff who was born in Gyumri, and Nina Berberova, who helped put the French publisher Actes Sud on the map many years before Paul Auster did, and that’s not a late modern-day myth.

How long have you been living in Armenia now, and what are the differences that you experience in your everyday life in comparison to your previous environments?

I’m closing in on my second year with my family. My wife, Garine Torossian, thought one year would be enough to edit her film, but our projects stretched out. She’s close to completing her feature, Noise of Time, which we co-wrote and is in post-production. The one big difference for both of us compared to other cities we have lived in was the stark realization that mattresses are very, very uncomfortable here. We suffered greatly as a result. It inspired me to write “Mattress,” a short story written from the perspective of an irascible Russian mattress with a number of owners, including a family from Odessa.

Another visible difference is the low level of trust in government. It’s true that mistrust toward public officials is high in most countries. In Armenia, it is palpably higher because corruption is so rampant. Just weeks ago citizens were coerced to vote for the ruling republican party candidate, the incumbent president, with 5000 dram (10 euro) bribes. If it only stopped there. Election fraud in the form of ballot stuffing is systemic despite the assurances of Western observers. I base my observations on a non-scientific poll I conducted with a random sample of 53 taxi drivers and pedestrians in the days before and after the elections. People voted overwhelmingly in favor of the opposition, many did so even after pocketing the 5000 dram bribe, yet the oligarchs somehow retained power. Civil society in neighboring Georgia would have rejected such an outcome, yet the response in Armenia has been one of relative resignation and fear, the temporary triumph of the forces of determinism over free will. This is the backyard of corruption and cronyism my peers are writing in. From the photo story “Parliamentary elections” by Anahit Hayrapetyan

Your short story “Le Plagiaire” (The Plagiarist), published in the current issue of the French literary review Décapage, takes place in Paris and is permeated by French culture. Does Armenia have the same influence on your writing?

Probably, yes, though I can’t give you a percentage breakdown by how much. It’s difficult to live in a place and not have it shape your sensibility and worldview, but that’s part of the project — to be influenced. Coming here was more than a sojourn for us. We didn’t fall in love in Yerevan like we did in Paris, but it is still our home, for now. It’s where we are learning and creating, and I hope we’ll have empirical evidence to show for this soon. But the idea of Armenia permeating my work is an exciting one, I think, because the country still lacks a clear economic and political trajectory. It has experienced a number of tectonic shifts, political and literal, in the years before and since its independence a little over two decades ago, and so it is a messy and regenerative place. Yet there is also stasis next to the changes, since two of its borders are officially shut and the ruling elites continue to snub the democratic process. To be at the center of these uncertain shifts and closed borders is hugely upsetting and inspiring and probably shapes the characters in my new novel in unexpected and, hopefully, inventive ways. The book I’m writing is not about Armenia, specifically, yet very much influenced by my experience and research in the southern part of the Caucasus these past two years. It is a land that is suffering from the pressures of extreme depopulation. It’s a somewhat tragic reality, but an exciting geography to be in, and one always sees pockets of hope even in the most dire of circumstances and ravaged cityscapes.

*You can read Nyree Abrahamian‘s translation of ‘Toronto’  in Transcript. Visit: http://www.lit-across-frontiers.org/transcript/toronto/ 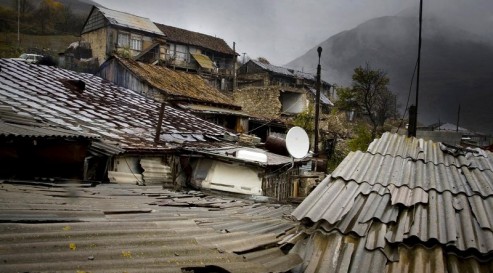 From the photo story "Khtsaberd" by Anahit Hayrapetyan