This issue of Transcript presents an unlikely literature. A literature undeniably across, but also, between, beyond, and in spite of frontiers. Its origins date to the fifth century CE with the invention of the Armenian alphabet as a medium of religious and national self-preservation. After more than a millennium, Armenian language and literature still feature prominently as crucial elements of national culture and identity. Their pride of place stems from the fact that Armenians lived without recourse to geopolitical sovereignty for much of their precarious existence. An endless slew of invasions, migrations, and displacements colors the greater part of their history. Such territorial instability had a decisive impact on the value of literary culture. In the absence of actual national borders, text provided, however remotely, a symbolic territory. From the photo story “Singles” by Anahit Hayrapetyan

The self-conscious deployment of modern Armenian literary culture, primarily as a nationalizing venture, can be dated with some approximation to the 18th century. Considered a period of revival, this era witnessed the rise of merchant networks and the expansion of print production. It should be emphasized that both developments took place not in the region of present-day Armenia, nor in its historically geographic extension, comprising a significant portion of Eastern Anatolia. Beyond these frontiers, the Armenian literary and intellectual revival took place to a great extent in the Armenian diaspora, in seemingly improbable locales such as Madras and Calcutta in India and various European hubs, especially Venice, Vienna, Amsterdam, but also Lviv (Ukraine) and Moscow. These locations were connected by trade and philanthropic activity, which culminated in the construction of numerous community establishments, especially educational institutions. Such efforts consequently promoted economic and intellectual exchange, and, soon thereafter, generated multilocal translation and publication ventures. This emergent print culture in turn reinforced transnational ties through the circulation of ideas borrowed liberally from the European humanist tradition.

Though linked globally at its origins, Armenian literature ultimately bifurcated along a regional divide. By the mid-19th century, one could speak of two Armenian literatures, from distinct but interrelated Armenian zones, written in their respective standardized literary vernaculars: Western Armenian, common to the Ottoman Empire and its connected diasporic hubs throughout continental Europe; and, Eastern Armenian, employed by Armenians in the areas across the easternmost Ottoman borders, ruled initially by the Persian, and, subsequently, by the Russian Empire. This linguistic pluricentrism persists until now.

Western Armenian’s literary genesis, with its de facto capital in Istanbul, can be credited to an elite urban intelligentsia, educated in Europe, mainly in Paris and Venice. In keeping with the epoch’s general trend, they led the double-lives of literati-professionals, fashioning and refashioning the language and political orientation of Armenian national consciousness. The work of these men – for, women made their literary-intellectual marks somewhat belatedly – facilitated the final departure from classical Armenian as the favored literary language. It also cleared the way for the emergence of later Romantic and Realist writers. The development of modern Eastern Armenian literature followed a similar trajectory. Instead of Istanbul and continental Europe, its pioneers matured mainly in Moscow and Tbilisi, educated at significant Armenian institutions. Unlike their Western Armenian counterparts, these groundbreaking figures were intellectually steeped in and embraced the Russian tradition. Hence, their reliance on realist aesthetics, social and political pragmatism, and populism as creative perspectives and methodological possibilities. Though they developed separately, the Eastern and Western Armenian traditions did share a limited degree of correspondence owing to certain individuals’ exceptional efforts, and, more importantly, to the late 19th century nationalist-revolutionary movements.

The twentieth century’s cataclysmic events forced the two branches apart at a critical juncture in their aesthetic achievements. But this division posed a marginal threat compared to the immeasurable losses inflicted during the First World War and the early years of the Soviet Union. On the Ottoman front, genocide decimated the once autochthonous Armenian population. Its first victims, scrupulously pursued by the reigning Committee of Union and Progress, consisted of the Western Armenian intelligentsia. Over 200 public figures, including most key writers and publishers, were arrested on April 24, 1915, and led to their deaths by deportation and execution. Many more followed the same bleak fate during the ensuing months and years. The few who survived later described this targeted assault specifically against the literati as the Armenian intellect’s beheading. Western Armenian literature, they declared, met its demise through theirs. Writing in Western Armenian continued with some verve throughout the diaspora until the last several decades, burgeoning for brief spells in Paris, the Middle East and, to a limited extent, in North America. The inevitable is currently underway, however, with this literature facing imminent demise due, primarily, to language loss.

As evinced by the present compilation, its sister branch nonetheless persists with remarkable fecundity. No less affected by social upheavals, Eastern Armenian literature navigated through the politically tortuous path common to its Soviet corollaries. Armenia, very briefly independent in and after 1918, was integrated into the USSR during the early 1920s. Its history reflects the experiences of many Soviet republics, where collectivization, the Stalinist terror, and the Second World War took their social, economic, and cultural tolls.

The ideological forces at play throughout this era directly and indirectly shaped Soviet Armenian literature’s thematic and stylistic course. In its first decade, this literature predictably stoked a revolutionary worldview, promoted by writers who were also actively engaged in politics. One of their main concerns was to reconceive aesthetics in a manner that could prevail over bourgeois, also read national, constructs. Another was to stigmatize and marginalize individualism. By the 1930s, they had succeeded in redefining literature as a venue for representing the quotidian dimensions of collective existence in a socialist state. Ironically, during the Stalinist purges of the late 1930s, some of these very writers at the socialist helm were arrested, deported, brutalized, and murdered for their presumed nationalist agendas.

The following decade, spanning the Second World War’s duration, took an interesting turn toward history. Once a 19th century staple for Armenian literature, the historical novel altogether disappeared as a subgenre after the First World War. In the 1940s, it resurfaced, coming into ideological conflict with the commitment to portray contemporary reality. Nevertheless, the context of total war instigated a new set of historical novels evoking a collective past replete with heroic struggles. The implicit nationalism infusing such texts took on more discernible proportions in the Cold War era. Nationalist movements had gained momentum, and literature lent its voice to the spirit of the times, as it began to subject the national past to serious reevaluation. Meanwhile, some writers, especially those who had returned from military service, took another thematic route by writing on the ravages of WWII. This era of reemerging self-reflection paved the way for the subsequent period’s renewed emphasis on individualism, spearheaded by the poets of the 1970s and enhanced further by the psychological novelists of the 1980s. With the taboos against individualism ostensibly lifted by the end of the 20th century, literature advanced with relative ease, unimpeded by political constraints.

The Soviet Union’s collapse in 1991 presented a new set of unprecedented challenges to independent Armenia. A protracted war with Azerbaijan over contested territories in the Nagorno-Karabakh region intensified the emerging state’s already grave economic and geopolitical challenges. A frail economy, exacerbated by government corruption, has and continues to drive widespread emigration, especially toward Russia and the United States. The country presently confronts a general atmosphere of degradation, in which the arts face mounting ideological and pecuniary obstacles. Transcript’s initiative to present these translated works thus arrives at an extraordinarily opportune moment. 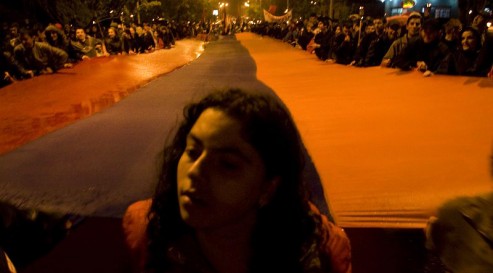 From the photo story "To the Tsitsernakaberd" from Anahit Hayrapetyan