Something is happening, but I don’t know what.
a chest expanding and tightening,
the vein walls constricting, those grooves, glands
releasing immense bitterness over Zagreb.
that’s what the sky is like these days: a nightmare
without a bit of holiness. a sketchbook in which many things
have and have not been drawn, the rustle
of millions of legs on the move.
nightmare, voices repeat, nightmare
you repeat. the sharp stripes down which
rain descends into its ruts; fingernails, surely fingernails.
leaves tied around wrists, because it’s autumn and these things
painlessly pass. water is boiling
in pots. dogs blossom black. those who approach me
approach the blunt evil: nightmare, I repeat,
nightmare, they repeat. the entire sky has
huddled into the clavicle, and in the sheer noise
no one can hear each other. everything’s new, and everything’s foul,
everything in Zagreb. eyes, plates, things
across which we look at each other. all holy, all sharp
all dogs, all our dense voices. the speech
of a city eager to bite, pine trees, a flock, something
in the air, under the ground, in the walls; something
above us and somewhere else. something is happening,
I don’t know what.

TO MY NEIGHBORS (THIS MORNING MY FLESH IS A LOWERED FLAG)

Honey melts in tea, completely, unlike you with serious music,
and unlike me in you,

the tense wire of the never-ending call, a crowded bar,
no place for you, and the elevators that are always broken,

the stairs unfold into eternity, like conversations about politics,
and just as someone notices that totalitarianism and democracy

are only a question of numbers, someone pulls the plug,
the picture disappears and everything starts again: voices

leaking trough walls, and evening falls into your hands, like a miner
descending into his pit, yet still, the shoes left at the door

prove the living exist. but what does it mean to live
as winter comes scrolling like cold breath out of your throat,

and builds its nest in the dark alphabet; all those hurried unknown
people with familiar names, an afternoon split in two, like Korea;

the tea and honey have already melted, inseparable,
and this viscous liquid is love: how do I get to you; how do I reach you?

TECHNIQUE OF A POEM

The first Croatian president is slaughtered by oblivion
his junta by too hot soup and the dead waiters
who now ignore them; as I walk the city in the opposite
direction of death, as I buy newspapers, buy coffee at
a kiosk, I listen to my belligerent charm, to my soft character
and Haustor, the band; an average Croat is slaughtered by co-existence,
tolerance, with his mouth full of snow– wide and light smog eases
down on him and takes him, together with all that fall, its
morning dark, with water that rises up along your neck,
water, material and soft; the church is slaughtered by constant quoting
of Christ, by love, unconditional and lasting; a pig disappears on its
own, cowers, into a puddle of breath, into a fistful of blood flowing
before experience; a poem is slaughtered by Drago Štambuk; a mother
as some detailed records describe; nothing remains nothing
that shiny scorched sun. 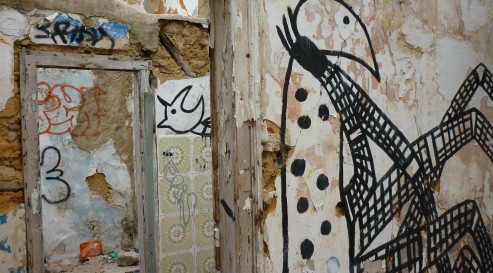