My girlfriend is blind. If I wanted to, I could fool around or even have sex with another girl, if we keep it down – with my girlfriend in the same room, boiling the kettle, microwaving popcorn, drying her hair. When I come home from work she doesn’t ask how my day was, she wants to know about the density of traffic, the progression of construction works in the neighborhood and what people on the bus talked about. She wants to know if my day was louder than usual.

Sometimes I won’t go to work at all. I’ll kiss her, shout goodbye at full volume, slam the door – and stay in. I’ll hold my breath until she’s turned her back to me. There’s a good spot in the corner by the window where I can sit for hours; I place my body downwind of the air stream, for the draught to breeze my scent away. I synchronize my breath with hers, my chest echoing her chest, my lungs following hers around the room. She will talk on the phone, sing to the radio, dance a little perhaps, swinging her head like a hen pecking up grain in the yard. When she eats, crumbs fall around her like shredded confetti. She touches things to make sure, counts the tiles and her steps wherever she goes.

My girlfriend loves going to the movies. We sit in the love seat, hold hands, chomp on candy, drink soda, laugh as loud as anyone. When the movie ends we hurry to the toilets and listen to people talk about it. This gives her a rounder picture, she says. It’s easier to figure out what she thinks about it. And on the way home she wants me to retell the movie, arrange the story line neatly in sequence, describe it in detail. The actors, their faces, the silences. Especially the silences. With her I’ve learned to watch films as if my life depended on it. When we started going out I used to give it my all – I’d bring a notepad, write it all down. Then reconstruct it for her meticulously, like a paleontologist putting together a dinosaur skeleton. This would excite her so – we’d make love all night long, and then I’d go over the story again for breakfast.

Lately, though, making stuff up feels far more exciting. I’ll twist the story around, change the setting, the time, switch the relationships, make them sexier, platonic, polyamorous, incestuous. Some will say it’s as good as cheating, but those are the dull people always ready to explain to you the difference between love and fiction. Besides, she seems to enjoy these stories more since I’ve let them loose. She wants to listen to them all night long now. Her sex drive seems to have gone down, too.

Before me, there were other boyfriends and girlfriends. Dozens, of all sorts. Some even black, maybe. Or a pair of twins, who took turns. Maybe some of the girls were boys, too. I’ve seen pictures but it’s hard to tell who or what these people are. They look pretty ordinary and rather indifferent: they could be her teachers, neighbors, brothers and sisters, or pasted cutouts from magazines, for all we know. They don’t seem to be concerned, or bothered or stressed about posing. They don’t need to make themselves pretty for her. Or maybe they, too, are blind. It’s hard to tell when they’re fixed on paper, when you can’t see them dance, eat or walk.

I don’t know if she was born blind or if she’d been ill, or if she was in some kind of an accident. She never cared to explain and it was never the right moment to ask. And now, after four years, it’s sort of passé, a matter too inappropriate to discuss. Sometimes I could swear there must have been a time when her eyes were good – when I talk about colours she pouts her lips, as if she knows exactly what I’m talking about. But whenever I see her chicken dance again, I’m back to square one.

Most days, most of the time my girlfriend stays at home. She likes to cook for us. She can tell the time by the smell of the stuff in the pan. It’s one of the abilities of the disabled – your other senses get super-developed. When Gandhi was on that hunger strike, and for thirteen weeks he fasted, half-way he started levitating spontaneously. People would come to him and ask him questions, like what they were thinking about, or what they had in their pockets. If it was food he always knew exactly what kind of stuff it was. My girlfriend is like that. That’s why I put on her dress, rub her cold cream into my face and use her toothbrush when I decide to spend my office day watching her from the corner by the window.

When they hear that my girlfriend is blind, most people will first think of the downsides of dating a blind person, like missing out on the best part – the exchange of meaningful looks, the foreplay of signals, silent innuendos. I tell them we skipped that stage anyway. We met at a Halloween party, she was dressed as Daredevil, a visually impaired superhero, and I played along. The next day when I woke next to her and she wouldn’t quit the act, I figured what the hell. It’s not like she’s missing a limb. We kept in touch over the phone, I got used to her voice. We went for long walks, then a couple of concerts, but the thing really took off when we started going to the movies. Three films later we were living together.

Although she is blind, when we go out my girlfriend likes to make herself up. Sometimes I get the feeling that she is flirting, but I suppose I’m just being paranoid. Most of the time her eyes are as clear as bottled water and they never wander around in their sockets, but what do I know? Sometimes she asks me if I would stay with her if she got paralyzed, or got some rare tropical disease that would make her sleep all the time. Although I can’t imagine how this paralysis would strike her or where she’d get her disease, I always say yes, and I mean it. My girlfriend is really good-looking. I’d be with her even if she were missing a limb.

The other day I found this story about a guy whose faith in God was restored when a blind man made him draw a cathedral. This story got me really excited, and I thought reading it to my girlfriend would restore our sex life. When we got into bed I took the book out, read the story to her slowly, sensually, and then asked her if she, too, wanted me to draw her a cathedral. In my hand I had a pen and on my lap a piece of heavy paper that I had prepared.

And my girlfriend, she just laughed – louder than I’d ever heard her laugh. She gently took my hand and with it drew the most perfect cathedral I have ever seen. 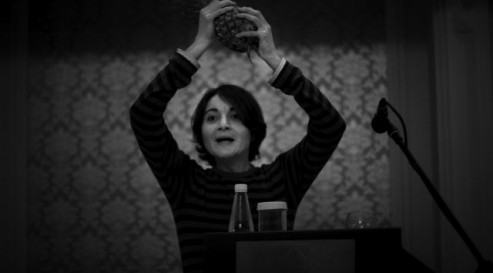