Dog Licking its Wounds
Translated from Catalan by Matthew Tree

I have to confess that the way memories die away in such a placid fashion has always upset me, but what upsets me even more is the gentle manner in which they allow themselves to be fished out of the waters of the past when we need them for some reason, the way in which they twitch in the net, knowing that they will soon be used to unite two threads which have become separated in our minds.

Right now, for example, all I need to do is mentally open the door of a caravan, in one not so distant summer, and go inside and have my siesta, falling asleep, hearing my wife outside as she listens to the radio and leafs unenthusiastically through Cosmopolitan, or whiles away the time reading a novel of over 700 pages… But then again, there is one Sunday afternoon, of many years ago, unfocussed and faded, which is forever demanding my attention, like a nervous child who can finally answer a question and raises his hand so that the teacher – please sir – notices him.

It was almost certainly a cold March afternoon and I must have been eleven or twelve years old. At that age, after lunch, Sundays seemed to expand considerably, like a stretched pullover, and I played in the street, or in the park, with my friends from the neighbourhood, until it got dark and the first concerned father came to tell us that it was time to come back indoors. Then we had trouble finding the plastic parachutist we’d abandoned a couple of hours ago in the now dark grass, or we argued about who had scored the most goals that afternoon, and when we pedalled home under the amberish light of the first lit lampposts, chilly on our bikes, we felt a kind of inexplicable childhood melancholy and we shouted so as to scare it off, as if we’d gone crazy. (A couple of years ago, by the by, I relived that sensation on the deck of a pitching ferry: there was a rough sea, the sky was clouding over and two children were trying to play table tennis with concentrated expressions, but were unable to score any points because the wind kept blowing the ball away.)

If I wish to recall the above-mentioned Sunday now, however, it is because on that day things turned out very differently. I had just wolfed down my lunch, as usual; I was waiting for the obligatory five minutes to go by – my legs were probably swinging restlessly under the table – before my father allowed me to go outdoors. I must have stared at him for quite a while, or tried his patience with one of my usual pranks – rolling my bread into little balls or poking the gristle of the steak with my fork – because suddenly he got the message and informed me that that afternoon we would all go out to the trade show. Mother added that I would like it very much, for sure, but I noticed her voice had a certain incredulous ring to it.

Maybe because of that, and because I’d already learnt how to show them that I felt insulted, without saying a word I went to my room. I lay down on the bed, I remember, and thought about those kids who ran away from home in the films they used to show on Saturday afternoon TV, and about how I was just like them, and during all that time – until mother opened the door (without knocking) and told me to put my shoes on and started to comb my hair, saying we’d be leaving in a moment – I clenched my fists tightly, but without digging my nails into the skin because I was learning how to play the guitar.

I don’t need to add that half an hour later, holding my mother’s hand, I was walking round the trade show, annoyed and in a sulk, but soon I had to make an effort not to show that I was having fun. In the pavilion dedicated to livestock, which stank of damp straw, a frightened sheep allowed itself to be stroked by my shy hand, and a little later, in another pavilion, my father lifted me up and put me on the seat of an extremely tall tractor which, for a couple of minutes, became Emerson Fittipaldi’s Formula One racing car.

At one of the stalls we bought some candyfloss, and as we walked among shining mechanical saws, steaming, bony animals and nickel-plated cages holding rabbits, my lack of enthusiasm seemed to melt as fast as the candyfloss in my mouth. Almost certainly by that stage I had stopped thinking about my friends from the neighbourhood, and about the ball that they were kicking around, but then we passed by a stand where there were a lot of people and we stopped to have a look. There was a colour TV on display, one of the first on the market, and everyone was going up to it with a respectful air, peering at it to see if they could see anything.

I let go of my mother’s hand and ran into the mass of legs until I got right to the front, and then I could see those dazzling colours coming off the screen, the electric green of the pitch and the shirts of the players, the colours of which were so clean and clearly defined that it felt as if you could touch them, and suddenly I thought about my friends again, kicking the ball about in the park next door, and in the middle of all those people I suddenly felt very lonely. Without thinking about my parents for a second, I barged my way out of there and started to walk along the aisles of the trade show.

In the area dedicated to mobile homes and caravans, a smiling hostess stopped me in my tracks and asked me if I was lost, but I didn’t say a word in reply: I didn’t know what I was doing and, without looking back, I ran past her and went on walking. Then I entered a caravan. At first that smell of newness, of new things, made me feel a bit dizzy. It’s odd, but the folding furniture, the brand new cooker and the curtains, all so small and fragile, toy-like, made me feel better. I didn’t think twice: I slammed the door shut and locked it from the inside (outside, the hostess began to knock gently on the door, thinking I was only playing a game). Then I stretched out on one of the sofa beds and with my eyes shut tight, to staunch the flow of tears which was just beginning to emerge, I closed my mouth and tried to hold my breath, to see if I could die. 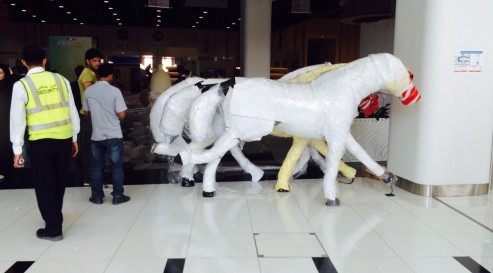