Mister T. by the sea

He picks up a pebble from the shore.
Notices the pebble has the remarkable property
Of not having an inside and an outside.
The two coincide.
As he cannot think of anything else,
He decides the pebble is an enemy to the world and throws it away.
The pebble’s fall creates the effect known as “ a hole in the water”.
Mister T. feels immense attraction
and an inexplicable envy towards the pebble.

So, he picks up another and puts it in his mouth.
At first it is salty.
It is a sea- thing.
Shortly after that, it is nothing.
A hard lump of silence in his mouth, absorbing his voice.

Nevertheless, to his surprise he realizes
That even without a voice, he can still speak.
Evidently his invocations are granted.
A flock of sea- birds lands by his feet.
When they fly away they leave behind an illegible text.
Mister T. bends down and begins to study it at once.

Inside the house, in the front room there is a gap.
Actually it is a thin crack on the floor – almost invisible.
Nothing to worry about. Except for the fact that the crack is not inert.
Often enough a draught of air is exuded smelling of dust and rust.
And of something else unidentifiable. Also that it has a voice.
Mostly it is mute. But every so often it produces a sound.
Sometimes he runs there, kneels and sniffs like a dog.
After, he steps away slowly, infected by this chthonic, illicit vein.
He wears his coat then and opens the door.
More dangerous, pungent and sharp like a knife blade he walks.
A reaper of glances.
He tunes the song of the streets.
He sucks in the marrow of the evening.
From its hollow bone he makes a flute and quickly shoves it in his pocket like a killer.
His fingers stroke the holes.
But he doesn’t dare play.
It is not yet time to exhale.

From “The book of the soil”

“On weakened legs I walked around the town the whole day. I took photographs”

The Hungarian photographer André Kertez with his walking (for thirty years) wore out  the network of streets of at least three cities. Eighty-five now, confined (by grief) to his apartment on Fifth Avenue in New York he photographs whatever is around him with a Polaroid.
With the delicate movements of a glass statue he changes his position in the room. He shifts the focal axis of his gaze. He doesn’t need to go anywhere.
He says: “I forgot to eat. I took photos. I started at daybreak and waited until dusk. I took photos again and again. I forgot my medicine.” Two years later in the book entitled From My Window you can see the city melting through the window pane, you can see the shadow of a hand menacing a shiny doorknob without ever reaching it, a diaphanous glass bust slowly digesting the naked trees of the park and the twin towers above the window sill. You can see what you don’t see.
He did come outside again. He photographed the spasm of a little girl running in the park and the half figure of a man in black disappearing. In Paris he photographed himself double closing his eyes and a crumpled half-opened white door reflected in the mirror.
Every day he collects the brittle honey-less wasp nests
Restless wax catacombs of buzzing.
Every evening he empties them in his bottomless archive.
There’s no way he can stop this
It’s not a place that would be possible to leave.
Every formulation, every construction of death
Is resurrected in the buzzing that seeks still more.
More snow and networks of traces
More mirroring of the shadow on the whitewash
More walking with a strange suspension of joy
When he lets the sting prick him again and again.

How to advance in a field

Even though there’s no door we entered somewhere.
At once we came face to face with the process of transformation.
Tens of tiny birds (previously invisible) took flight from the ground
Touching the tops of the standing crops.
Thus making them breathe
Making them take part in the flight.
Every corn stalk it seemed gave birth to a bird.
At a certain moment they stopped.
Not one of them remained.
We didn’t know yet how to advance
With our question pale green in the hand.
Had it been a well we could have cast a stone
And waited for the response
Or it might have been enough to seize some elements
(plants, a little earth)
In order to draw our conclusions.
That is to say by an attack or theft.
We decided to forget ourselves in our little choreography.
Forgetting just like entering is a departure.
What ought we to have left behind?
Giant thorns with a saturated orange color
Turned their heads in the imperceptible air
As if they were about to move forward.
In the whole place as we were approaching
What we would call center
There was only the sense of beginning.
The field, a clenched fist that wouldn’t show. Here the days do not dissolve in the air
They drop into the water
Forming their very own layer
A surface of separation.
A hawk flies above the body of the summer
It dives again and again
Feeding and getting drunk from falling.
There is nothing here
Only crazy wind and stones
And sea
A random promise
Sharpens our lust with the blade of the moon.

When I arrived for the first time in this landscape of endings
The wind entered my mouth with such fury
As if I were its sole receptacle
Until all my words disappeared.

Every tree receives the wind differently
Some suffer others resist
(I met a palm tree that gave birth to the wind and distributed it
in every direction)
Others shake all over and change colors.
I of course am not a tree
I sat down and wore the wind as a coat
I bent my head and looked at the ground
From its crevices, the roots of thyme
With their hieroglyphics struggled to enter the light
Then the words came back.

*Tenaron (Ταίναρον):
The southern most tip of continental Greece. Ancient Greeks believed it to be the end of the world. 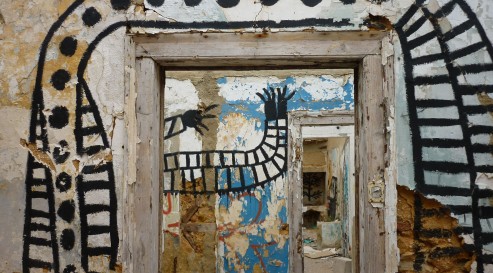