Because of the ongoing mechanical difficulties
Because the dead reign like gods
Because I manufactured it for him and her and even you
Painted bird and all,

Whether you have that great jump shot
Whether I bow and genuflect
Or turn toward a great cash cow
I don’t know what, what happened here?

The three awards,
Moldering in the hall.
Between the tea poured &
The pouring rain

Along the bank fault
Stone roused itself,
Wept, shape shifted…
Into wine.

This thing called “you” collected silks.

Drink up, drink up I said.
Then, in the green house,
Death. He wears the jute robe & a cool handing eye–
The monster sits up, a surgeon’s spin.

Small game wish Freedom is ours.
And, past curfew, gone the cure.
Before the theft, bound.
Ransom held.

The price is Light. From the photo story “Singles” by Anahit Hayrapetyan

Elegy for a Fatal Beauty

Blind Arcades. And on the river bridge
we possess, gold & spices,
beyond Nemo, beyond make-believe
as far as it is successful— Wink & glide.
Captain America throws his mighty shield.

Post concussion-like peace talks,
albeit, in the GAMBLING hall.
Hammer. Hammering out a fun house.
A Fatwa. Well, what did he expect just now,
sacral errand boys, that rather, a bar of white soap,

cleansed him one day? / Tired of unsightly stains?
For a limited time only… yet, there is a limit, he said.
And on the downbeat, a Great Great Emperor His Majesty looks back
(these varying tricks) as if what was played for,
happened like THIS. Song of pure bread.

I understand.
The sick man fell.
And you may not,
friendly, enthusiastic & purring,

persuasive, in fact.
A votre sante.
That’s a lovely child you have there
(& hammer, possibly in disguise,
in the midst of skin-deep crime maps).

Stock rotation. See, Plato’s Cave—
Onward, to keep water from something foul.
I smell the blood.
Tune the marrow by that piper’s tune

and follow, this dying thing.
Among the overhead deities,
How much does your soul weigh? he said.
Have you banished it, a bearded cow,
did it melt on the tongue, or what?

On his way to work one morning,
the fat man reformer
discovers his tongue in the butcher’s window.

Fishing for elephants he calls them reasons,
mistaking steel for fat, moonlight
for beards.

Asking why
the buffalo state has no buffaloes.
In his sleep Stampeded 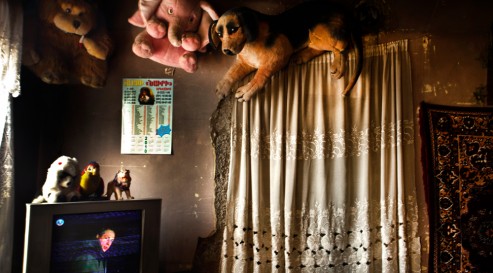 From the photo story "The Puppet Life" by Anahit Hayrapetyan