POEMS FROM THE FIRST TO FORGET (2009) AND NEW WORK

In the narrow boat we are two.
One woman upright as a raven
and a boy in white. With us, the boatman
his face anyone’s.
The sky is viscous iron,
the water the hue of a sardine’s belly,
the boat’s reflection a blue blade.
Europe’s rot in our nostrils.

If I am the boy I have a sailor cap
and three pearls of tears from my round cheek
freeze towards my open collar.
If I am the woman swaying above him
my eyes gaze at no shore.
My clothes are neither wool nor silk
but brushstrokes of black
and the banknotes in my purse
are letters penned in invisible ink:
In the blink of an eye truth becomes nothing.

If I am the boy I know only this:
My toes are petrified with fear,
the water has a big mouth.

If I am the woman, under the flowers
bloated like jellyfish on my hat
is the voice that tells me, confident,
inside the black veil: Know,
you will have no rest.
The cloth will be torn from the wound slowly
again
and again.

Translated from Hebrew by Vivian Eden

– Suppose you are lying on your side, a long time, it’s almost November and you are still on the same side, your cheek already hurts, your ear hurts too, your neck is twisted, your ribs are smashed and your whole body is screaming ‘enough’.
– I’ll turn to the other side.
– Suppose you don’t have another side.

Translated from Hebrew by the author

No-one among us recalls anymore
how long we’ve been waiting
for a blind white wave to expunge that whose
mere resurrected memory
could clench the chest in the morning,
and the trachea at night

for, the ant swarms which were driven away
return to blacken our homes, and boiling water
from the porcelein cups leaps into our faces,
and knives which have grown weary by berry flesh
are seeking fingers.

When will the scraps of paper flying about subside,
the shreds of a futile spell
sink into dust?

What sounded like rain was just building waste
piled up to a mound.
What sounded like wailing was wailing.
For some time now we’ve been in need of a new disaster
to destroy the remains of our disaster.

The point of tenderness

…at the hour when we are
trembling with tenderness
lips that would kiss
form prayers to broken stone. – T.S. Eliot

This is where tenderness resides.
Even if the heart in its silence
sinks within the city like stone –
know that this is the tender point.

Hold my hand in this world.
I saw a mother talking hatred to her child,
exterminating with words,
I saw a building collapse into dust,
slowly, floor by floor –
how we need mercy,
how we need so to soothe.

When the night closes on an unkissed nape
it is beyond healing: each choking
of every throat has but one cure,
see, it’s so simple,
it’s the point.

Translated from Hebrew by Aliza Raz

I sit by the edge of a swimming pool, dipping my feet in the deep water. Someone pushes me in. Perhaps he wouldn’t have done it, had he known I can’t swim, I think on the way down. I sink till my toes touch the bottom and then I rise. I pull my head out of the water and know that now I should be screaming “Help!” before I go under again, but I forgot what country I’m in and what language I’m supposed to shout in.

Translated from Hebrew by Aliza Raz

Ran out of cooking gas or something
who remembers why
I went up to the roof
one day in May
a day that spread upon the sky a sheet
the shade of mustard of an orange of an H-bomb
and the long arduous craving for rain
rose as a howl from the parking lots
to the satellite plates
there lofty dwellings did surround me
there castles of the lords did besiege me
Summit Towers Tel Aviv Towers
Sheraton City Towers
Gindi Hights and Yoo Citadels and that little phallus of a building
and in the shade of the towers
looking like a forest of taut $ $ $
their claws thrust in the receding earth
and their flat foreheads in the yellow skies
I reflected upon the apartment eighteen steps below
upon the grace revived year after year
conditionally with no renewal option against a security deposit
upon the tirelessly self-refining setting
that one day
with a swift, proficient tug
will be pulled like a rug
from under my feet.

Translated from Hebrew by the author

We’ve been trapped in the land of sleep.
Between my exile and yours,
on a street whose name rots in the rain
in a setting of child bicycle thieves
and baffling bedraggled women,
there one room is reserved for us,
twenty-four hours.
I immediately forgot the map you drew –
if you close your eyes all is lost,
lost if you open them too.
And what is the lullaby
one voice will sing to us both
A carousel of shadows
goes round and round.
Don’t hold on, don’t remember
get back to the ground

There is no place for us in the waking hours.
Here, where summer’s hand
reluctantly releases the throat and bats
hurl themselves high above the pavement
and are swallowed up in daylight,
only behind my eyelids can I see
the color of your whisky, of your snow.
And you fall asleep while my body is terribly awake,
and leave as I sleep with my face towards the window.
What is the consolation
and what is the lullaby
that will awaken us both at once
Night train
striving towards the light,
board it and leave
your body behind

What I am not:
playing at has been or hasn’t
wondering if you were real or imagined –
as though I could invent
the two different halves of your face,
as though my own two halves were true.
And like a guttering light bulb
your name is erased, recalled, erased,
sixty flickers per minute,
match to match, silence in silence
and what is the lullaby
that will cover us both in one single instant,
with eyes open wide
in the hush that will dawn
dwindling away,
going, gone.

Translated by Vivian Eden and the author

The baby who bears my name is a month and two days old.
Unaware she has been born into hell, she wrinkles her tiny nose
and balls her hands into fists like babies everywhere.

Her four kilos and the cake her grandpa didn’t bake
weigh on my heart.
If I send her a teddy bear, it will sink like a stone.

The sharp fin traces its circles. I climb up,
my foot on the deck, shame and alarm on my face.
My baby has been left behind. 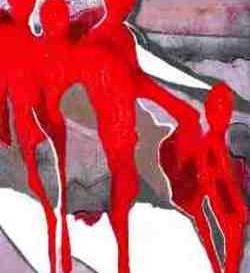