I made the plan while we were in church; I knew where my father’s hunting rifle was and I’d already fired it – at a bottle and to scare cats and chickens.
If there is a God up there, which I’m not so sure about any more, He definitely won’t let me off lightly because I came up with the plan right there at the altar when the priest was talking about forgiveness. The one thing I can’t forgive myself for is that I didn’t take better aim at Uncle Peko – my hand trembled a bit.
But he got the fright he deserved, the bastard. And I’ll be alright: In a few years’ time I’ll have finished school, and then it’s straight off to London. Adieu, cockroaches!

Dad was in the backyard washing the car. It was the first sunny Sunday after a long winter. The cherry trees were in bloom in the garden – it was lovely. David prepared a bucket of soapy water.
“Dad, why were a black man and a white man in London holding hands? Vanja told me.”
“Because they were poofs. Right, David?”
“Uh-huh.”

I knew what a poof was. Someone who had AIDS. There was one in our town. Petaš showed us where he lived – in a block of flats on the first floor.
“Who’s going to do it?”
“Me!”
I’m not a hood and I don’t usually throw stones through people’s windows, but this time it was a bull’s-eye. For David and Vanja. So no one would think my brother had AIDS.

I liked Vanja because he burned cool CDs for me, told funny stories and had blue leather sneakers. They squeaked when they rubbed together. They were really fab and had yellow stripes. He said he’d give them to me when I wore Size 9. His plan was to finish secondary school and leave this little dump. Adieu, cockroaches! That’s what he said.
But I liked our city. It’s green, the men are strong and the women pretty, the climate’s mild and the sea is just a short drive away. There are plenty of cafés where young people like to go, and a disco. Some people live in flats, but it’s nicer to have a garden and keep animals. I told him all this. But he said he was itching to leave; he just needed to save a bit more money. I imagined Vanja walking through a big city like you see on telly, past shop windows full of Nikes and CDs.

“Dad will never let David go!” I blurted out.
“Who’s asking him anyway?” Vanja said and spat a long way.
I spat too, but not very far.
I didn’t want David to go to that city of sneakers; I wanted him to stay with us. And if he and Vanja really went, I at least wanted them to take me along. But they didn’t even dream of that. No way, you haven’t even finished Year 8 – that’s what they would have said. Perhaps they would have held hands there like the black man and the white man and didn’t want me to see. I told this to Dad, without thinking. And he arranged that David be drafted into the army as soon as he finished school.

Then, early in the summer, David and Vanja disappeared. We looked for them everywhere for two days.
No one says anything now, but it was in the newspapers and on telly. We found them in a field near the road out of town, hanging from two cherry trees. Everyone knows I saw them first, but they don’t know how it was: the cherries were just ripe, the leaves of the trees were still a juicy green, the grass was tall and yellow; first of all I saw Vanja’s sneakers, the blue ones with the yellow stripes, dangling down between the branches; “Vanja, Vanja!” I called out, glad to have finally found them; I thought they were picking cherries; but then I ran into the other body; it was David, my brother; he hung there cold and blue and all pale like he was revolted by something – or worse.

I don’t know why everyone was worried about me as if I was the one who’d hung himself. I didn’t cry too much – only when I found them; I was frightened because I’d never seen dead bodies before. I just don’t want to talk to anyone. Before I go to sleep at night I try to imagine David. I want him to come to me in my dreams so I can explain that I didn’t mean to tell Dad about him wanting to run away, and that I’m sorry, and that I miss him. But when I fall asleep I don’t dream of anything – except sometimes Vanja’s sneakers sticking out between the branches of the cherry tree as if he was hiding up there like a starling: I take them off him and run.

Aunty Rosa and Peko came to help Mum a bit. She was popping valium and sitting there like a wooden Madonna. I didn’t see Dad at all – he hid out in the shed, pottering and tinkering away. Rosa cooked for us while Peko philosophised. Everyone was thinking about David, I knew it, but no one mentioned him. Only Peko, the old fart, remarked at regular intervals:
“He was a good boy, just in bad company.”
Then everyone fell silent. And stayed that way for a while. I didn’t say anything either, but inside I was seething.

This morning, before we went to church and to the cemetery, Rosa took out and brushed the Communion suit – a hand-me-down from David. Both of us began to cry. She hugged me; she was soft and hot and her hair smelt of home-made doughnuts, and something about that made me sad.
Peko came into the room to hurry us up. I put on the suit while he comforted Rosa out in the hall; he spoke quietly, but I heard him loud and clear:
“Come on, calm down, maybe it’s better this way. What good is a life like that to anyone?”

As soon as we came home from the funeral I fetched the rifle and went out into the yard, aimed at my uncle and fired. I’ve had enough of you, you bastard! Aunty and Mum saw me and immediately screamed; my father rushed at me. I didn’t want to kill Peko and go to jail, I just wanted to hit him in the bum or the leg. But my hand trembled and the bullet went into the tree next to him.
Dad ripped the rifle off me and raised his mighty hand; he was going to beat the living daylights out of me, I knew it and pulled my head in. But he just placed his hand on my shoulder and repeated:
“My son, my son.” 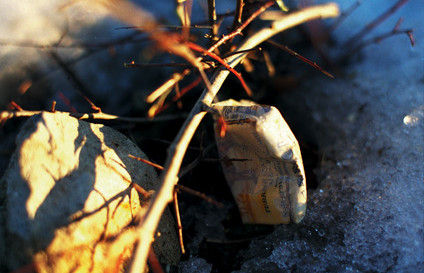