Return to LAF
Text size:
A voice for a Roma generation: Ilona Ferková
by Karolína Ryvolová

Ilona Ferková’s education finished at 15 with primary school. At the time, her father was seriously ill, her family were struggling to make ends meet and she had to start working. She worked in a series of menial jobs until the 1990s, when she was offered a position in a bilingual Czech-Romany kindergarten in Rokycany supported by the Open Society Fund.Ever since childhood, she had wanted to record the stories of her father, who was a great storyteller, but she had not considered Czech a suitable language for the job. However, when she met Milena Huebschmannova in the mid-1980s, she realized that her mother tongue Romani could also be used as a literary language. With Huebschmannova’s support, she first of all penned some traditional folk tales, but gradually she developed what was to become her trademark, namely stories reflecting the lives of contemporary Romany women.

Ferková records the everyday injustices of the former regime, the unwelcome visits of social workers to the home, the placing of children into care, the humiliating attitudes of authorities towards young Roma families, but she does not shy away from problems widespread within the community itself, such as teenage pregnancy, lack of education, crime, and the inequality between women and men. More importantly, her subject-matter did not die with the transition from totalitarianism to democracy, but has changed along with the times, so her short prose can be read as a chronicle of developments in the Roma community.

Between 1999 and 2003 Ferková and her family were seeking asylum in the United Kingdom. After her return, she wrote a cycle of sketches Vakeriben pal e Anglija (Stories from England), which has since been published in an anthology of Czech Romany prose entitledČalo voďi (A Soul Well-Fed, 2007). With her extensive magazine production in Romany periodicals such as Romano džaniben, Amaro lav, Romano kurko, Romano hangos, Kereka and others, and her collections of short stories Mosarďa peske o dživipen anglo love (She ruined her life over money, 1992) and Čorde čhave (Stolen children, 1996), she is one of the strongest voices of the 1990s generation of Roma writing. ‘Conkers’ (published in this issue of Transcript) is a sample text from her most recent undertaking, which is a cycle of short stories revolving around a homeless Roma character, Conkers.

One asset of this short story is how it reflects two different trends in Roma writing. The frame narrative and setting are extremely contemporary. As a deprived community, the Roma are particularly susceptible to all kinds of addictions, gambling being one of them. Ferková has invented the term ‘metal devils’ for gaming machines and they appear in more than one of her stories as a source of despair and destruction. The setting is urban, ungainly and low-life.

And yet, even against the backdrop of a setting so depressing, one can see that certain traditional values still apply. For one, Conkers is a great storyteller who deserves to be rewarded for his efforts, just as in the old days before the invasion of Roma communities by TV. What follows, then, is an inserted story-within-a-story, an anecdote told in the most conservative traditional fashion by a universally respected storyteller. In it, on a tiny space of half a page, a male character (= Romany trickster) gets himself in trouble with his wife (= now an adversary) and solves the situation by means of his cunning, which is an age-old pattern repeating itself in most oral traditions of persecuted peoples, but Yiddish and Roma especially. 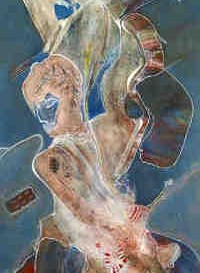