Hana Doda is an ambitious literature student in cosmopolitan Tirana. Mark Doda is a raki-drinking, chain-smoking shepherd, living alone deep in the Albanian mountains. In fact, they are the same person. Hana has become Mark, but what will become of the Sworn Virgin when she moves to America?

‘So, Mr Doda, you’re a poet,’ says her traveling companion, who for seven hours had occupied the seat next to Hana on the plane.
The line of passengers waiting to get through passport control at Washington International Airport snakes tiredly.
‘Not really.’ She tries to smile.
‘But you write poems, if I’ve understood you correctly.’
You can’t write good poems with a dry cunt, she says in her head. She looks away. A woman is touching up her lipstick, her husband watching with slight disgust, tapping his fingers on his passport. Hana catalogues the scene under the heading, ‘Man out of love, woman still hoping, marriage ceasefire about to expire.’
You can’t write good poems with a dry cunt, she says to herself again, annoyed. Why the hell did she tell him she wrote? He pins her down with his look. It’s no good, she thinks, your enlightened man’s brain will never be able to guess. Hana smoothes down her man’s suit. The sports jacket’s a bit big, but not that much.
Her traveling companion had stared at her the same way during the flight.
‘Here’s my card,’ he now says, ‘in case you need anything, information about the capital, any suggestions. If I’m not traveling around the world, or at my house in Geneva, I’ll be in DC. Really, call me when you want, Mr Doda, I’d be happy to help out.’
Mark concentrates on his carry-on. On his shoes. On his cell phone, which he wants to turn on. I’m sorry, she pleads in silence. Hana reads the name on the card: Patrick O’Connor. The man is of Irish origin. She smiles. Christ, we country folk can smell each other out.
Her left breast begins to itch. She tries to scratch herself without using her hand. She started feeling the presence of her breasts a year ago, as soon as she got her Green Card and decided to emigrate to America. She can’t seem to stop the itching.
‘Mr Doda,’ Patrick O’Connor calls, indicating with a nod of his head the passport controller’s narrow cubicle.
The line has moved on. Hana kicks her bag forward. Her brown shoes, on either side of the bag, look like little hibernating bears.
‘What is the purpose of your visit to the United States, Ms Doda?’ the officer asks as he opens her passport.
It’s too late to go back now. Even the village knows he left holding the passport of a woman.
The village had observed, with penetrating, attentive eyes. The way he was dressed on the day he said goodbye was the object of quiet scrutiny; there were no comments. It was a dark time, people had little energy to spare. Past glory had faded into the howls and excrement of stray dogs. Shreds of history, the moans of gangsters whose only law was the code of honor, sunsets that were afraid to drop, for fear of being surprised by death.

She gets through the first passport control and breathes a sigh of relief. They point her to an office where she has to go through more formalities. A half-empty room with thin plaster walls. With her limited vocabulary she finds it hard to assemble the answers to the officer’s questions, but the man is patient, and Hana is grateful to him.
‘Welcome to the United States of America, Ms. Doda,’ he says at last. That’s all we need to know. You can go now.’
She runs into the nearest men’s room, catapulting herself towards a washbasin. The face in the mirror is angular. Hana shifts her gaze towards a man waiting to go into one of the stalls. Others, unabashed and hasty, relieve themselves at the urinals. The door opens and closes to the irregular beat of the travelers’ footsteps.
Hana takes a deep breath, hoping to tame her panic. The family is waiting at Arrivals. There’s her cousin Lila, her thirteen-year-old niece Jonida – whom Hana hasn’t seen since she was a baby – and their husband and father Shtjefën, as well as some other people from the village, who had emigrated years before. ‘Proud to be American’, as they had said in their badly written letters. They’ve come from various places in Maryland, and from Virginia, and from Pennsylvania, and even from another State called Ohio.
Hana had spent a great deal of time poring over a map of the United States, but her imagination had melted at the sheer size of the country. America is immense. She’d lived in a village of 280 people.
Out! Now! She says to herself almost out loud. Get out and be a man.
That’s what the clan expects. They want to see what they left behind, a young man gone grey with the weight of duty, a much-loved relative, but an oddball. Mark’s arrival is meant to bring them back to the mountains, to the smell of dung, to the splutter of guns, to betrayal, songs, wounds, flowers, to brutality, to the seduction of the mountain trails inviting them to throw themselves over the edge, to love.
Hana shakes her thoughts away. This restroom in Dulles International Airport is so real and tangible, and yet she feels so alien here. You need balls to deal with all this, she thinks, balls she doesn’t have. And that’s not all you need. Why balls? Why? Why me?
Get out of this bathroom, she tells herself, Get out of here, for Christ’s sake! 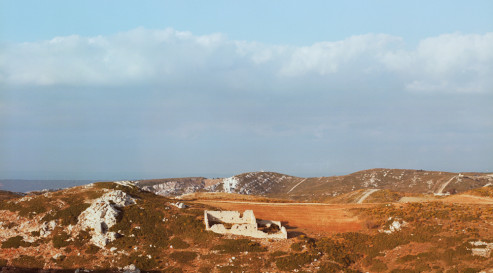