“The children laid under their nipples. They were laughing together and acting as if they wanted to suck milk out of them. The missus was frantically telling them not to do it. I just told her to leave them alone… leave them alone… If these cows weren’t going to entertain the kids, what else were they good for?”

For a split second his hand reaches for his cigarette packet but changes his mind and resumes talking. It becomes apparent that he’s remembered what he’d forgotten. “The missus wasn’t angry ’cause she meant bad. She was just edgy about someone saying something. Those Belgians are cool people but still they’re foreigners to us, ya know. I didn’t pay any attention, just kept taking photographs.” Squinting with one eye and looking ahead with the other, he pushes down the shutter release of an imaginary camera.

“They didn’t make them small either, they were all full-scale like real cows. They painted one of them like the world map and another like the patterns on a serving plate. Some had a head like a monkey while some others had a head like a hog. Those poor cows…” The sound of a car braking suddenly startles him and he looks at the road.

“The last time we went there was three years ago. It was when the brother-in-law had an operation. They’d sent the plane ticket that time, too.” He bends over and flicks a piece of thread hanging from the lower part of his trouser leg. “These cows weren’t there at that time.” A wave of pleasure spreads across his face as he drinks the last sip of his tea. “When I talk about this stuff the missus snarls, ‘You talk about the cows all the time like we didn’t see anything else.’ She’s right, but what can I do, I really liked those rascals.” He looks at the waiter, swirls his index finger inside the empty cup like a tea spoon: “Get us a refill, will ya?”

As the fresh cups of tea are placed on the table he says, “They placed one in front of the royal palace, too. A cow with a cross ornamented staff in his hand and a crown on his head.” He adds the other half of the sugar cube which he cracked in his palm not long ago into the second cup of tea and begins stirring it. “One way or another their king is a proper man, he didn’t kick up a fuss about them making a king of a cow.” With the back of his hand he chases away the house fly that landed on the edge of his red and white saucer. “If you were to place a cow sculpture wearing a tie in front of the prime ministry here, they’d outright make you sit on the horns… Actually you know what…” He pipes down. The sunlight continues to play in the crimson-brown liquid inside the tulip-shaped1 tea glass.

As I hear him say, “Man, I couldn’t listen to you since I have been talking so much, no offence. Go on, tell me what happened here when we were away,” I swallow my spittle. There’s no room left for me to unload the mountainous burdens I carry among his tales of different worlds. I fall short of words. He speaks so happily and lives with such vivacity that I can only look at his face with my vacant eyes, as if I were watching wagons passing by.

* Translator’s Note: ‘The Cows of Brussels’ is a short story from Yekta Kopan’s collected stories titled Cats Wake Up Jolly published by Can Publishing House in 2011.

1. Translator’s Note: In Turkey tea is served in little traditional glasses that are called ‘ince belli’, literally meaning ‘thin waisted’, due to the shape of the glass. The bottom of the glass is wide, the middle section is narrower and the rim is as wide as the bottom. Thus, the shape of these tea glasses can be best likened to a tulip. 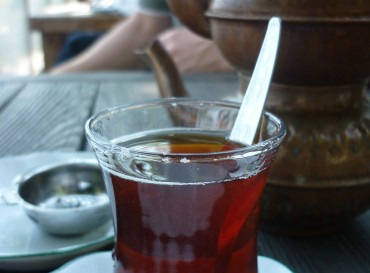