This excerpt of the first chapter of the English translation of Fatos Kongoli’s novel The Loser was first published in 2007 by Seren Books, a Wales-based publishing house. The book begins when the protagonist, Thesar Lumi, changes his mind and decides not to join a group of 10,000 Albanian refugees on a ship headed for the West. The rest of the novel tells of Lumi’s existence under the Hoxha dictatorship of 1944-1985.

We warmly thank Seren for their gracious permission to pubish this excerpt and we enourage you to discover their list here.

There comes a day when you get the impression that you’ve paid your dues to the world, the cycle is complete and there’s no more reason to ruminate on the past, in particular when your life has nothing of value to offer.

Nothing. Just a confession.

One morning a couple of months ago, a friend of mine, Dorian Kamberi, a mechanical engineer and the father of two children, boarded a freighter called the Partisan and sailed across the Adriatic with his family. If I hadn’t had second thoughts at the last minute, I might be living in some refugee camp in that dreamland called Italy too, or somewhere else in Europe, together with a horde of my countrymen. But at the last minute, as we were sitting on deck squashed like sardines, I told Dori that I was getting off. It’s possible that he didn’t even hear what I’d said. After the trials and tribulations of our journey – a veritable Odyssey – from town to the ship, my words must have sounded absurd. If anyone other than my friend had been beside me, he’d have chucked me into the sea. Dori said nothing and just gave me a blank stare. The whole time, I could feel the warm pee of his little son, who I was still carrying on my shoulders, trickling down the back of my neck.

My hesitation must have been obvious to everyone. I’m sure that my voice and my face expressed exactly the opposite of what I was saying. Even a small attempt on Dori’s part to dissaude me would have been enough to cause me to abandon the decision I’d just taken, not really even knowing why. It wasn’t a question of homesickness. I didn’t feel anything at all, and my mind was as blank as the expression on Dori’s face. He made no move to stop me, and I disembarked,my neck still moist from his son’s soggy nappy. I sat down on the edge of the wharf and looked back at the last groups of refugees scrambling to get on board. When the ship set sail and had reached the point where I couldn’t see the faces on deck any longer, I felt a lump in my throat. With my head between my hands, I was overcome by a long spell of sobbing. I didn’t realize right then that it had been years since I’d last cried. My soul was parched and I’d thought for a long time that nothing more on earth could move me to tears. Someone passing by put his hand on my shoulder and said not to worry, that there would be another freighter docking in the afternoon…

I went back to my neighbourhood at dusk. No one had seen me leave and no one saw me come back. Dorian Kamberi’s departure with his family became known the next day. It wasn’t the subject of much talk. Some criticized him, some praised him, and others were jealous. I paid attention to the gossip like a thief who has taken part in a robbery and listens to the news of its discovery. For the first time in the forty years of my existence as a bachelor, I had a secret to guard. It was possibly the only secret that my town hadn’t found out about. And it would never have found out if I hadn’t decided to make this confession. No one would really have been surprised to learn that I’d gone and boarded a freighter to disappear from the face of the earth. But that I should make the tedious journey, get on the ship, and then disembark all of a sudden, no, no one would have believed that. Even Dori, if he’d actually heard what I said, would never have thought that I’d really get off. Maybe he figured that, with my usual sluggishness, I’d have been more of a burden to him than his family, and so he made no attempt to stop me.

Nevertheless, there I was.The next day, my feet carried me out to the cemetery. You might have assumed that it was the grave of some loved one or some sort of nostalgic contemplation which had prevented my departure. This isn’t true, though I have a lot of respect for graves and for nostalgia. In fact, I’m envious of people who feel that those kinds of notions are important and provide stability, like the force of gravity, as a basis for action. For myself, I feel I’m somewhere beyond gravity, cast off and abandoned in a black hole of disdain. Nostalgia was a fleeting luxury for me. Those weren’t the motives behind my aborted departure or behind my visit the following day – for the first time in my life – to the cemetery. For everyone and from every point of view, I was and am a loser.

Grey clouds hovered over the town the next morning. My thoughts were with the refugees at sea. My parents – I live with my mother and father in a two-room apartment plus kitchen – didn’t even bother to ask where I’d been the day before. They were used to my absences and had stopped asking me a long time ago where I was going and what I was doing. My coming home at night was enough for them to get a good night’s sleep. So my thoughts were with the refugees. I was worried about them because of the bad weather, yet there are certain biological processes inside the human body that take place independent of your emotions. I was starving. I dressed and after a quick and muffled ‘morning!’ from the doorway, I left my parents to their coffee in the kitchen, and went out.

I don’t think there’s anywhere on earth quite as dusty as the place I live. There’s dust all over, on the flat cement roofs of apartment buildings, on the tiled roofs of private houses, on the pavements and on the flowers poking up in the only park in the centre of town. It sticks to everything, like icing sugar sprinkled on a layer cake in the baker’s showcase window. It powders your hair the minute you go outside, deposits itself in your ears and nostrils, gets into your lungs and follows you everywhere you go, to the café, the restaurant, and even into bed. I was about ten years old when they built the cement factory on the riverbank, on the outskirts among the hovels of the gypsy population. It was a construction from past centuries, said those in the know, and produced more dust than it ever did cement. The old people said that it was at exactly that time when the town started to die a slow death.

“You could already be across the ocean,” I thought to myself, shuddering as I strolled down the sidewalk. The whole place looked incredibly dingy on that grey March morning, so much so that I almost broke into tears. “You idiot!” I scolded. “What have you done?” I headed straight to the tavern. Normally I’d have gone first to the Riverside Snack Bar to ease my hunger, but there had been rumours circulating recently that its owner, Arsen Mjalti, a one-time foreman at the cement factory, had been using meat of dubious origin for his grilled sausages. There was a lot of gossip about it, ranging from rotten meat taken from dead cows to dog meat, and the gossip was confirmed by plenty of cases of diarrhoea among his customers. They weren’t able to come up with proof to give Arsen Mjalti a good beating, and simply boycotted the establishment. So the snack bar was now only patronised by a few good friends of his and by the occasional unwary traveller passing through. It’s possible though that the rumours had been spread by a few envious individuals, as some people said that the one-time foreman was making a fortune and that, if he continued, he’d have enough money to buy the famous Hotel Dajti in Tirana.

The tavern was empty. As luck would have it, behind the espresso machine on the counter there was a row of bottles of Scanderbeg cognac which I hadn’t indulged in for quite a long time. The waitress at the bar knew exactly what I wanted before I could even open my mouth. She handed me a double cognac to start with, and then made me a coffee. I went over to the window with a glass in one hand and the cup of coffee in the other. Here, customers drank standing up at little elevated tables. Without further delay, I downed the glass of cognac in one quick gulp. I felt terrible and was on the verge of tears. I was hardly able to stifle what would have been a ridiculous scene in front of the waitress. It was only the third double cognac that saved me. Calmer now, and confident that the beast clawing at the depths of my being had been vanquished, I ordered a fourth cognac which I sipped slowly, together with the coffee that I hadn’t yet touched.There were few people on the street. Either the heavy clouds of the morning sky had discouraged them from going out, or, as it was a Sunday, they were still sleeping or lying in bed staring at the ceiling, sure that there was nothing of interest to bother going outdoors for. Everyone seemed to be sleeping the sleep of the dead. I wanted to go down to the town square and scream at them: “Wake up, my fellow citizens. Everyone else is gone and you’ve been left behind!” 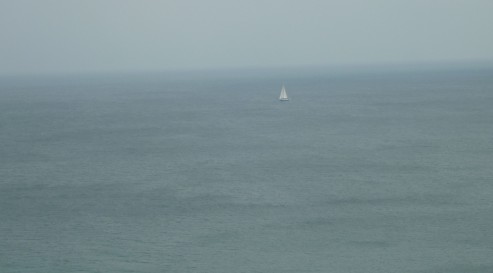