There were no classes. Instead we marched down to the square and began to shout slogans. At first the teachers led us but soon we got into a group with no teachers and we could shout what we wanted.

Your blood is swine’s blood

It was hard to say the words because I was laughing so loud. Muhannad squashed his nose with his finger and oinked like a pig.

Solve your problem with Monica

That was the funniest one. Muhannad screamed in my ear about Clinton’s cigar and the Jewish woman, which was bad because a girl was next to me. He told me the story almost every day, but it was funnier this time, or maybe it felt like that because the tall girl was there and such a crowd was in the square. The sky was bright, although it was a cloudy day.

More and more people arrived. Men and women in their work clothes from the ministries and banks and others in tracksuits and gellabiyas from the flats over the bridge. Some of the old ones looked tired and bored. Some of them looked scared, but maybe they weren’t. Most people were shouting like us. They were angry. They listed the names of all the Arab countries attacked by America and Israel – Palestine, Lebanon, Syria, Libya, Sudan, and Iraq of course. I was wet with the sweat of other people.

Somewhere fires were burning. Something in the atmosphere had changed, apart from the smoke. Everybody was waiting to see what would happen next. We watched so intensely that I began to have a headache. We watched until steam rose from our heads.

I don’t know why, but suddenly we moved. We surged up the road like a river so red with will that it’s forgotten gravity, past the newspaper stand and the flower shop and two restaurants and two embassies and the writers’ union, surging and shouting past. Mostly it was cream-coloured blocks of flats with kids and old ladies cheering from the balconies, but I didn’t wave or look at them because I was running.

We came to rapids at the British building. The river solidified and slowed and at its edges split into freshets and pools. It was a flood looping round the entrance to the building and back across the road. I was on the kerb of the pavement on the opposite side, leaning on the nearby people to keep from stumbling, and I was higher than most of the heads. Brown hair and black hair and headscarves light and dark. We shouted slogans for a long time. My throat was tired of shouting but there was more in me to shout, and I never wanted it to stop, I wanted to shout until the street cracked and the birds fell out of the sky. I thought of the boys in Iraq shouting as the ceiling burst above them.

Then the door of the British opened and an Arab woman came out and said something. Her hair was as long as her back, glinting like a horse’s tail although the sun was behind a cloud. Her mouth disappeared behind the door for a moment. Next the British men and women emerged red-faced and they left one by one down the stairs. Some of them were smiling. The crowd parted to let them through. We all went quiet – I don’t know why. I could hear cars in the distance, and the wind.

The door was closed. A man in a leather jacket slammed it open again with the sole of his boot. He ran through the door. At first we just watched. Most people were just watching, but then the pressure of the crowd pulled us all into the building through that door as tight as a throat, and after that it was as if our fists and feet didn’t belong to us anymore, or as if everybody’s fists and feet belonged to us all. It didn’t matter who did the punching and kicking. We punched the walls until the plaster cratered. We kicked chairs and windows and files and cabinets until the air whirled. The noise roared in my ears.

It was a bit like a dream, or a bit like watching television, except that it was us doing it on this side of the screen, us acting as we’d always dreamed of acting. But it was me, not us. I did it. I snarled and laughed as I did it and when I saw Muhannad he was crying. He was doing it too.

There were stocky men with hammers under their leather jackets. They all wore the same style of jacket. They brought the hammers out and swung them against the reception partition until it crumpled. In the bathroom they hammered toilets and sinks into a million white shards. They were experts at hammering, calm and precise and unruffled.

I always practise reading English words wherever I find them, but I’d found none in the building so far, nothing intact. In the furthest room I found a sign inside a frame, and though the glass on the front was cracked the words still hung together. Making Friends for Britain, it said. I know what that means, so I kicked it. It flew into a pile of metal bars which looked like a hedgehog but had been chairs. I reached in to dig the sign out but I couldn’t reach far enough before the bars stuck into my chest.

When I turned round I was alone. When I knew I was alone the noise in my ears fell silent.

I called for Muhannad. My voice had no echo. I crunched over the rubble through the rooms and into the street. The crowd had gone. All that remained was driftwood.

I was standing on the pavement dreaming a little when a Mercedes pulled up. I don’t know how it got there because the road was blocked by fires at the top and the bottom. The Mercedes pulled up right to the kerb and its engine growled. I couldn’t see the driver until he unrolled his smoked window. Then I saw a man with a huge bumpy chin wearing sunglasses.

I didn’t want to go home. How could anybody go home? The man was staring at me so I started walking away. But as I walked I thought, if we had done this much we could do something else. I don’t know what exactly. We were so strong, I felt we would change everything. Except it wasn’t we anymore; it was just me and the man in the car. I walked down the road we’d all run up. The balconies were empty now.

When I got home my mother was cooking lentils. As soon as she saw me she started shouting. She slapped her own face and then she punched my shoulder. She forgot entirely about the bubbling pot. The lid jangled against the pot and spurts of brown water dripped onto the fizzing stove, and she kept on shouting. Angry odours spread throughout the kitchen. It smelled jungly in there.

My father laughed and raised his arm to dismiss Mama’s fears.

He told me to sit with him at the table, and he poured me a glass of tea. He said the city today had reminded him of the sixties, the masses in the streets and the excitement. He was involved in politics then but he’d given it up. He said he loved us more than politics.
Baba and Mama talked for a while and I remembered the events of the day. Then Baba raised his voice.

“Let us go to the border if they want to use our anger.”

My mother looked at him as if he’d told a secret. “Be quiet, Kareem,” she said.

My mother made me wash the smoke and sweat from my body. I had blood on my knuckles and by now they hurt. After we’d eaten we watched the demonstration on the news. At the American Embassy a man had scaled a wall and then a tower and ripped down the American flag. The crowd below cheered and we did too from our kitchen sofa. The man wore the same leather jacket the men with the hammers had worn.

Then my father switched the screen off. 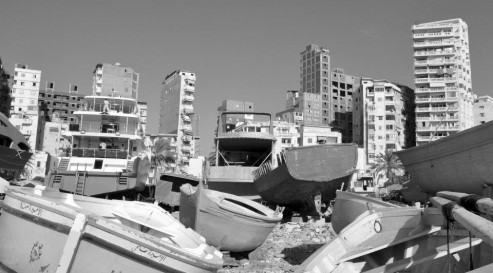