I’ve got this sickly taste in my mouth.  It was keeping me awake.  And there’s no point staying put in bed like that, is there?  I popped downstairs roundabout three to make myself some tea and a jam sandwich.  Got up again at a quarter to six as usual and made a touch of breakfast.  Then slept in the chair – until eleven.  I got a bit jittery.  And I swear, I ate my bacon raw, you know.

I was half way up the mountain when I thought, – only then mind you – I didn’t cook that bacon.  I’m almost sure of it.

The bad taste won’t go away, as if my tongue was black.  Which meant you were a liar, back when I was in school – if your tongue turned black.

I talk about things like the bacon when these doctors and official people call by.  They can do with some mischief in their lives: you can tell by taking one look at them.  And then they say, ‘Well, Mr Owens, couldn’t you taste the difference?’ as if it’s the end of the world.

They come here to look for proof that I’m losing my grip on things.  To ask, ‘What do you know about the Dee River on such-and-such date.’  That sort of thing.  They’re only trying to trick me.  And they poke about, ask to see the colour of my poo – ‘excrement’ they call it.  You can’t live without evidence these days.  What they’re after is evidence that I’m old, crazy and dangerous.  But it’s quite another sort I’ve got for them.

I tell them: I’m a swimmer, I’m fit, and I go towards that Dee in my swimming trunks to give this body of mine an MOT.

‘When nobody’s looking,’ I say.  I’m only waiting for some fool to accuse me of making the world a more dangerous place.

They tell me I shouldn’t bring a hornet’s nest about my ears.  That I should just keep myself to myself.  Do without love, if I’m hell-bent on living like this.  Plenty of men have lived without love; none without water.  I’ve thought a lot about that recently.  But what did I ever do, other than swim and fight for what’s right?

Now then, this is what I want – a moment to introduce myself – me like I know myself.  Not with notes, (‘Excrement: runny.  Skin: dry.’)  You wouldn’t be any the wiser for knowing that sort of thing.  A real introduction it is, then.  A man carries evidence about with him you know.  They’re stored up in skin and bone.  Dead proof of where he’s been, what he did, how he loved, his stories – a darn sight better than any other so called proof of his past.  And these bloody doctors pay no attention to the background.  Right, this is me: George Owens.

I’m no champion swimmer or anything like that.  I’m tall though, lanky some would say, and always have been.  A good shape for swimming, from the day I was born.  Long babies, us Owens, every one, my children and my children’s children all of the same mould.  An ounce of talent; a ton of energy.  Oh, and a touch of envy too.  Envy of fish.  Or more of the otters, really.  Our cousins, you see, the otters.  Mammals just like us, of course, but they slip in and out of water, from one world into the next, better than we can.  You can’t help but admire such a creature, can you?  Industrious and playful like that.  We need to borrow something from them, understand more.  What does it matter if my muscles hurt, if I’ve knocked my knee against a rock on the river bed? Going is good.  Listen here:

But there is also a third thing, that makes it water

And nobody knows what that is.

I heard this years ago, in a bit of a speech by some Patrick something from Bangor University when he gave his address after judging the ’Steddfod here in Llan.  I forget the name of the writer or which bard he chaired, since I was too busy listening.  Such softness he had in his voice too, in the way he waited for everyone to shush up, everyone, so even the knitters stopped.  And only then he’d start  Lucky nobody persuaded him to become a preacher, with a voice like that.

And I’ve been on the trail of that third thing ever since.  Looked in Bala library: no hope there.  Dolgellau either.  Librarians none the wiser.  Until one day, one of Nan’s books fell open when I was unpacking her boxes in the new house, and there it was – D. H. Lawrence – offering itself up to me like that, on the right page.  And maybe the only thing I needed to do all those years was ask my wife.

It’s that third thing I’m after.  Not too much to ask now, is it?

Back to me then, to fill out your picture properly.  My skin is pale, always in danger of burning in the sun, but my hair is as dark as a crow, not red like you might think it should be from my skin. But there’s red in the family somewhere too.  Mam’s side.  From the other side of the mountain.  They were all brigands in that part of the world, called the Redhead Brigands, Gwylliaid Cochion of Mawddwy, so they say.  But she was a crow like me.  Not a bit of white in her hair when she went: all the white was in her skin.

It’s her eyelashes I’ve got, or women’s eyelashes at least: long ones, enough to make them flap against the lens of my glasses round the reel, so it makes me think I’ve got a fly trapped there between the lense and my eyeball every time I blink.  And it’s jealousy I get from women.  My daughter, her friends, all of them, and a woman on the way to Aberystwyth on the bus, once.  ‘Diawch,’ she said, ‘that’s lucky you are,’ as if I had something really useful like a nose that sniffs out truffles or eyes that see through walls.  And then she offered me a Cola Cube, all stuck at the bottom of her paper bag, and she looked at me every now and again, from behind her magazine, checking, sort of, in case my eyelashes disappeared.  Personally, I can think of more practical things to inherit.

And my hands – Nan had a weakness for my hands.  Peculiar, she was, like that.  I can’t say that there’s anything special about them, myself.

‘You don’t exactly have bilberry picking hands, do you, now?’ she’d say, and place her hand on mine like a doll’s hand on a plate. 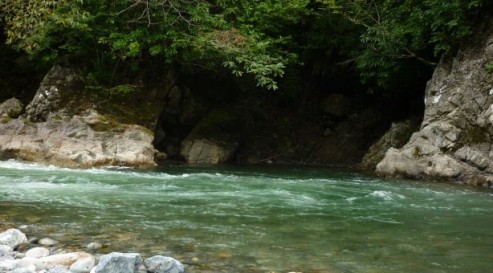