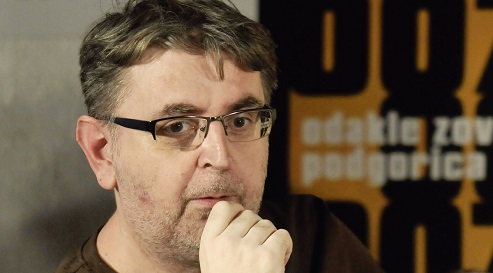 Bidisha spoke to Aleksandar Bećanović, the Montenegrin winner of the European Union Prize for Literature 2017. Bećanović (1971) is a writer, film critic and screenwriter. He is the author of five poetry books, two short story collections, one novel and two books of film criticism. He won the European Union Prize for Literature with his novel Arcueil.

What does being selected for the EUPL mean for you in terms of the exposure of your work and the expansion of your readership?

EUPL is such a wonderful platform for any author who seeks wider exposure, but especially for those like me who belong to a “small” culture and a “minority” language. I hope that this award can be fundamental for presenting my work to a broader reading public, but also that it will shed some light on contemporary Montenegrin literature.

Maybe it’s just a fetishistic thing, but my main thematic preoccupation is – the writing itself, the whole process of writing. When we tell stories, there is always a need to reveal how we do it, how we elaborate a story, which point of view we narrate from, and what are the aesthetic implications of this heightened literary consciousness. I am more interested in meta-stories than in mimetic dimensions of ‘realistic’ representation. I am well aware that this is a minority position, but I prefer “decadence” of style and enunciation to social and political engagement. In a time when there is a strong pressure for literature to intervene in concrete political problems, I still think that we must also have a place to “retreat” to and contemplate art of storytelling.

Do you think that literature is moving away from the solid 19th-century style novel and more towards a hybrid form: interlinked stories’ mingled text and image; poetic or aphoristic forms?

Basically, all (post)modern literature is an anxious reaction to the notion that we can’t tell stories anymore in the classical mode, or simply, that we can’t write as well as authors of 19th century novels, that we can’t even re-create that magnificent and poignant balance between thought and emotion, philosophy and melodrama. Instead of the plenitude and totality of 19th century novel we now have a sense of “failure” because straightforward narration is somehow lost and we can only recuperate our stories in fragmented and hybrid procedures and discourses. But, at the same time, this “hole” in the centre of our literary experience also means that there are new dialectics, and a new impetus between this constitutional lack and unmitigated desire to narrate. I found this situation equally frustrating and inspirational: we must tell our stories by any means – i.e. forms – necessary.