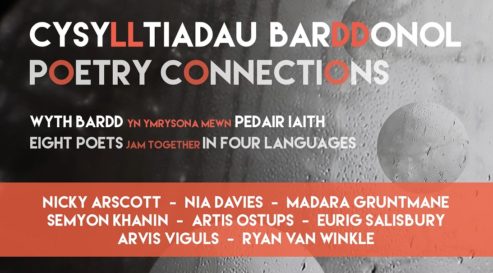 Poetry Connections brings together the leading lights of Latvia’s vibrant poetry scene with contemporaries from Scotland and Wales for a unique reading in four languages.

These award-winning poets will share newly translated poems, collaborations and experiments in a special event which reflects their friendship and celebrates the role art plays in building bridges between cultures.

Nicky Arscott lives in Llanbrynmair, Mid-Wales. She has an MA in Creative Writing from the University of Texas at Austin. Her poetry comics have been published in INK BRICK, New Welsh Review and Nashville Review and will be exhibited at MOMA Wales in September.

Nia Davies is a poet and literary curator. She was communications manager for Literature Across Frontiers for eight years until 2016. In 2014 she became editor of international magazine Poetry Wales. From 2013 to 2014 she co-edited the online magazines Poems in Which and Solidarity Park Poems for Occupy Gezi. She also co-curated Gelynion, the Welsh Enemies project, with Stephen Fowler. Nia’s debut pamphlet of poems Then Spree came out from Salt in 2012. Her recent publication is Çekoslovakyalılaştıramadıklarımızdanmısınız or Long Words from Hafan/Boiled String and a full-length collection of her poetry will be published in 2017. Her essays, poems and other writings have been published internationally. She is on the Executive Committee of PEN Wales.

Madara Gruntmane is a poet and pianist. Born in 1981 in Liepāja, Latvia. She works as a producer for cultural events. Her first collection of poems Narkozes (Narcoses, 2016). She received the Annual Latvian Literature’s Reader’s Choice Award, and is currently working on her second book of poems.

Semyon Khanin (real name Alexander Zapol, 1970) is a poet writing in Russian, a translator of Latvian poetry into Russian, and editor of numerous poetry collections of Russian and Latvian poets. He was the compiler of the anthology Latviešu/krievu dzeja. Latviešu dzejnieku krievu valodā rakstīti dzejoļi (Latvian/Russian poetry. Poems in Russian written by Latvian poets) and co-editor (together with Artūrs Punte) of the anthology Современная русская поэзия Латвии.1985 – 2005 (Contemporary Russian Poetry in Latvia: 1985 – 2005). Khanin’s poems have been translated into English, German, Italian, Czech, and Ukrainian as well as several other languages. He is one of the key members of Orbita, a multimedia group of poets and artists whose works aim at creating a dialogue between various cultures and genres (literature, music, video, and photography).

Artis Ostups (1988) is a Latvian poet, translator and essayist. He is currently editor-in-chief of the online magazine Punctum, as well as an author of essays on literature and philosophy. His poems have been published in some of the major literary periodicals and magazines in Latvia. His début collection Comrade Snow/ Biedrs Sniegs (2010) was enthusiastically received by readers and critics alike. His second collection, Fotogrāfija un šķēres (Photograph and Scissors) was published in 2013, and his third Žesti (Gestures) in 2016. His poems have been published in English in the Literature Across Frontiers platform, translated into German, Russian, French, Czech, Slovenian, Croatian, and Lithuanian.

Eurig Salisbury (1983) was born in Cardiff and raised both in the city and in south-west Wales. He taught himself the ancient Welsh poetic art of cynghanedd when he was thirteen. He has won awards in many Eisteddfods (Welsh cultural festivals) from a young age, and was one of five young poets who took part in a successful poetry tour in 2006, Crap ar Farddoni, and in the same year he won the Chair competition at the National Urdd Eisteddfod in Denbighshire. His first volume of poetry, Llyfr Glas Eurig (Eurig’s Blue Book), was published in 2008, and a book of children’s poetry, Sgrwtsh!, in 2011. After working as a research fellow at the University of Wales Centre for Advanced Welsh and Celtic Studies at Aberystwyth, he is now a lecturer at the Department of Welsh and Celtic Studies, Aberystwyth University. He was Bardd Plant Cymru (Welsh Children’s Poet Laureate) 2011–13 and Hay Festival International Fellow 2012–13.

Arvis Viguls (1987) is a Latvian poet and translator from English, Spanish, Russian and Serbo-Croatian. His first two poetry collections, Istaba (Room, 2009) and 5:00 (2012), were published to great critical acclaim and won him several prizes, including the Annual Latvian Literature Award for the best debut of the year and Latvia’s main poetry festival’s Poetry Days (Dzejas dienas) prize for the best collection of the year. His third book Grāmata (Book) will be forthcoming in 2017. His poems have been published in anthologies and literature magazines in more than fourteen languages. He has worked as the host of the literature programme on NABA radio.