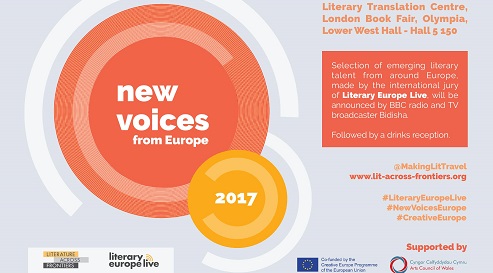 Who are the most interesting writers working in Europe today? Ten of the most exciting emerging writers from around Europe, selected by international literary festivals, will be announced by BBC radio and TV broadcaster Bidisha. Over the next twelve months, their work will be promoted in a series of live and digital events across the European Union and beyond. The aim is to highlight the richness and diversity of European writing in all genres and languages and to provide an opportunity for the selected writers to develop their international careers. You can find out more about last year’s New Voices from Europe here.

The New Voices from Europe selection is part of the Literary Europe Live project which is co-ordinated by Literature Across Frontiers and co-funded by the Creative Europe Programme of the European Union.